Shares of the German cancer immunotherapy company Affimed (AFMD -0.83%) jumped by as much as 25% in premarket trading Monday morning. The biotech's stock is popping in early morning action today in response to overwhelmingly positive early-stage trial results for its lead product candidate, AFM13.

Specifically, Affimed announced that an investigator-initiated phase 1/2 trial evaluating AFM13 in combination with cord blood-derived allogeneic natural killer cells produced a 100% objective response rate in patients with recurrent or refractory CD30-positive lymphomas at the recommended phase 2 dose and after a single treatment cycle. Equally important, the company noted that there were no reports of serious adverse events such as cytokine release syndrome, immune cell-associated neurotoxicity syndrome, or graft-versus-host disease. 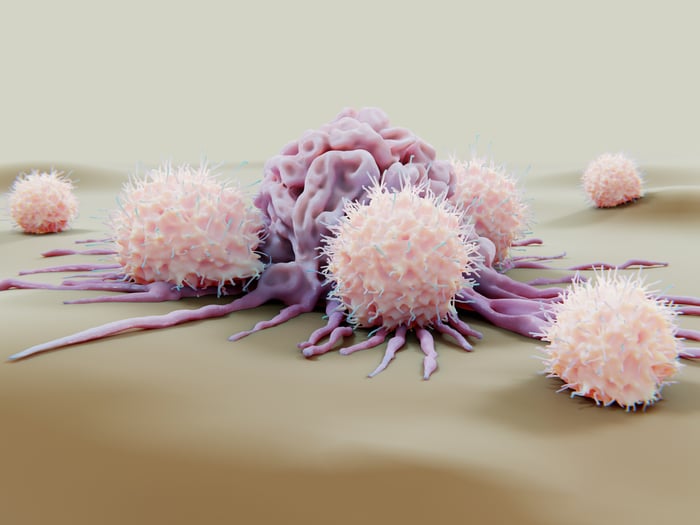 Although investors shouldn't draw any firm conclusions from a small, early-stage trial, these preliminary data are eye-catching nonetheless. What's important to understand is that these were heavily pre-treated patients who had progressive disease after their latest line of therapy. That's a tough setting, to put it mildly. And that's what makes this perfect objective response rate at the recommended phase 2 dose all the more impressive.

Affimed said it will host a conference call on Dec. 9 at 8:30 a.m. ET to discuss these initial results, as well as the study's next steps. In the interim, aggressive investors might want to consider buying shares of this small-cap biotech. Apart from its handsome organic growth prospects, Affimed stands out as a strong buyout candidate, especially after today's clinical update. Several big pharmas, after all, have shown a keen interest in acquiring early-stage cancer companies with assets that could eventually evolve into franchise-level products.

Why Shares of Affimed Fell Thursday

Why Affimed Stock Plummeted by Over 16% Today