This is the one crypto everybody should own.

I am late to the crypto space. That might be why I like Solana (SOL -2.39%) so much. I have no investments in Bitcoin (BTC -0.21%) or Ethereum (ETH -1.87%). Once you invest in something, you start to have a bias in its favor. Those early coins have made investors a lot of money. So it's natural for people who have won big with those coins to think they will continue to win.

I believe it's still early days in the crypto revolution. And while Bitcoin and Ethereum have definite advantages, so does Solana. Its tech is super fast compared to those older blockchains. And it's this dramatic increase in speed that makes Solana so important. Here's why. 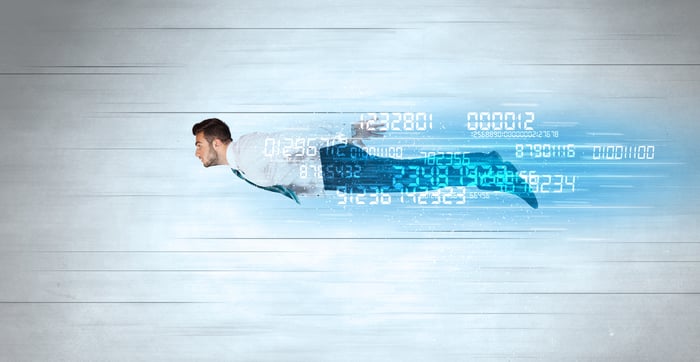 Solana has already had an insane run this year. Its value has skyrocketed from nowhere to the #5 crypto (measured by market cap) in less than a year. Its price change since the beginning of the year is charted below. 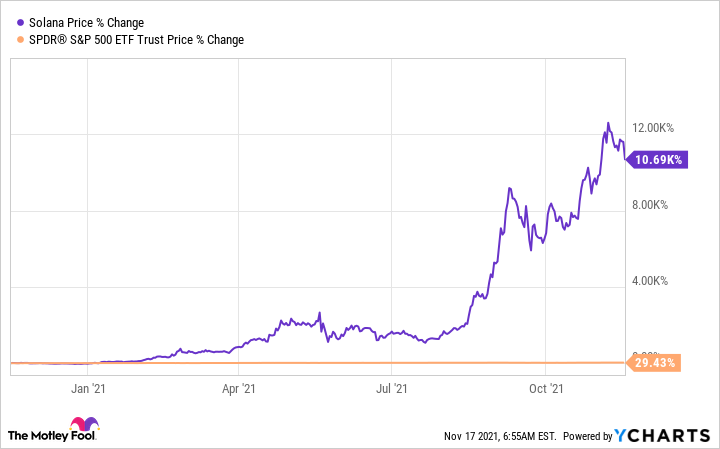 Solana is up 10,000% year-to-date. I could compare it to Shopify or Square, but I wouldn't want to embarrass my favorite stocks. Silvergate Capital is up 600% and it looks like an anthill next to Solana.

Solana is now the third crypto whose price data will be reported on the Bloomberg terminals to traders every day, after Bitcoin and Ethereum. That institutional decision indicates that Solana is a significant coin and people need to hear about it on a daily basis. But why is this relatively small ($66 billion) coin getting mentioned in the same breath as Bitcoin and Ethereum?

Solana averages 50,000 transactions per second. That's 7,000 times faster than Bitcoin. And it's 29 times faster than Visa's network. So that's why Solana was my very first purchase. Speed is critical for scalability and widespread adoption. And Solana is winning this race. It's not even close.

Solana is smaller, so it has a way bigger upside. Even after its fantastic run, the coin could easily jump another 1,000% or more.

"Gas fees" are the transaction fees that users pay to miners to get their transactions included on the blockchain. While the fees shift all the time, Bitcoin's fees are insanely high, comparatively speaking. Back in April, it would cost on average of $59 to get your transaction on its blockchain. So Bitcoin is very secure, very slow, and very expensive.

Ethereum has become the #2 blockchain (its market cap is over $500 billion), because so many other coins are building off its blockchain. Ethereum gas fees are also incredibly expensive as more and more people try to get on that network. The price was under $10 for most of its history, but earlier this year, it spiked to $70 a transaction. On average it's about $39.

Solana is a no brainer

I'm a newbie at crypto, and I'm learning as I go. I'm sure I will make a lot of mistakes as I make investments in this area. But it seems to me that Solana has a key advantage in speed and cost right now. Its blockchain is both super fast and super cheap. While older blockchains that are built on Ethereum might have switching costs, going forward it seems to me the vast majority of new projects will be built on Solana. So I think this coin is going to be more and more valuable in the future. I believe it's going to supplant Ethereum. And it might even give Bitcoin a run for its money.

Why Are Investors Taking Profits in Cardano, Polkadot, and The Sandbox Today?
397%