The company will be taking on Just Eat Takeaway on its own turf.

In a bold expansion move, food and retail delivery company DoorDash (DASH -4.29%) announced its acquisition of Finnish delivery company Wolt Enterprises on Nov. 9. The American company is shelling out $8.1 billion in stock to obtain a significant foothold in Europe and Japan.

The stock market responded jubilantly, sending DoorDash's share price soaring about 30% by Nov. 15. Let's look at why the acquisition could be bullish in the short run, but doesn't solve a big long-term problem confronting DoorDash and the rest of the food delivery sector. 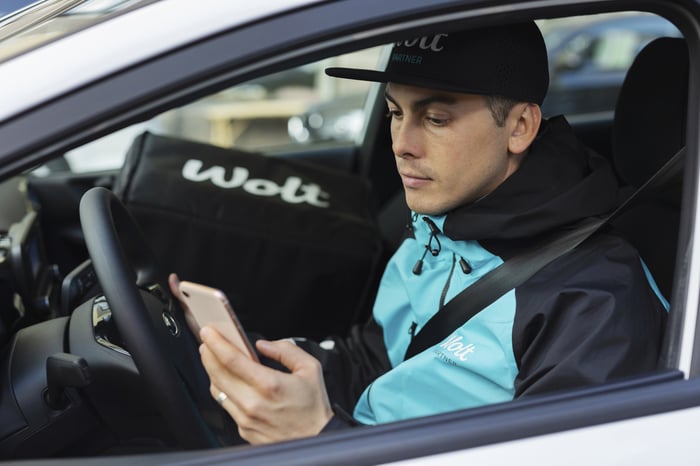 What Wolt brings to the table

While the stock market reception of the all-stock acquisition cooled after the initial peak, DoorDash is gaining significant current and future expansion potential by making Wolt its subsidiary. Wolt currently operates in 23 countries, including many in Europe, such as Germany and Poland; Central Asia, like Kazakhstan and Azerbaijan; and Japan. Its annualized gross order value (GOV) -- using Q3 as the latest quarter -- has risen 130% year over year to approximately $2.5 billion.

Note that GOV is not the same as revenue; it's a metric of how much the orders delivered by the company are worth to the restaurants, with Wolt receiving a portion of that as fees. It is still an overall indicator of the company's success at generating business, however.

The acquisition gives DoorDash a presence in 22 countries it had no delivery services in previously. During DoorDash's recent third-quarter earnings conference call, chief financial officer Tony Xu said his company intends aggressive expansion with the subsidiary, since "the potential in our combined markets create a substantial opportunity to grow gross order value to multiples of its current level."

Wolt, like other delivery companies, is generating rapid revenue growth while continuing to see persistent net losses at the bottom line. During 2020, revenue increased approximately 300% to $345 million, according to a January 2021 press release, but saw a full-year net loss of $45 million nevertheless. It also secured around $856 million in financing, enabling its rapid expansion despite losses.

There are several important parallels between DoorDash's acquisition of Wolt and its European rival Just Eat Takeaway's (JTKWY -0.67%) buyout of struggling American food delivery service Grubhub. In each case, the acquisition resulted in a large expansion to a new continent. Grubhub is also generating revenue growth: about 22% for the first half of 2021, according to an August report.

However, the stock market has judged each company's acquisition very differently, sending DoorDash's market capitalization soaring by billions, while bidding Just Eat's stock value down by about 81% over the past 12 months. Activist investor Cat Rock Capital is urging Just Eat to sell Grubhub, though it says, "We believe that the market is undoubtedly wrong when it attributes a large negative value to Grubhub," an assessment arguably supported by objective metrics.

The stock market appears to prefer DoorDash to Just Eat, and this extends to decisions about new acquisitions. DoorDash, however, is still struggling with the same major structural problems as Just Eat, Wolt Enterprises, and other on-demand delivery companies, with revenue growing at a breakneck pace while the bottom line remains deep in negative territory. 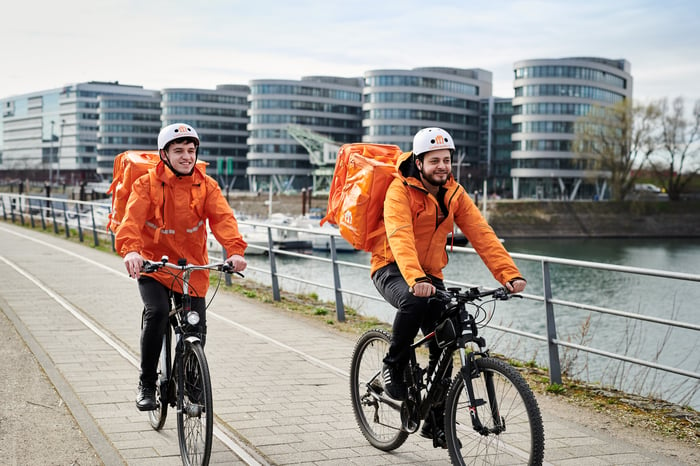 To stay afloat, DoorDash issued more stock, boosting its share count by 649.6% from 44.6 million shares outstanding on Sept. 30, 2020, to 334.3 million a year later. The cost of having enough liquidity to keep operating while generating an unbroken series of net losses is a massive dilution of its stock.

The question remains: How can DoorDash improve its bottom line to meet investor expectations and generate net income, and will its Wolt acquisition help it do so?

DoorDash may expand, but the scaling problem remains

The reason major food delivery services seemingly generate an endless series of net losses might well be scaling. No matter how advanced the delivery app, actual delivery remains tied to individual actions in the physical world. No amount of data collection, artificial-intelligence route optimization, or slick interfaces can eliminate the minimum time to drive a vehicle along a road with speed limits and traffic to a destination.

Another scaling issue is that while a dine-in restaurant can serve dozens of customers simultaneously without increasing its staff, the only way to increase simultaneous deliveries is to use more drivers, stacking expenses faster. These constraints apply equally to all kinds of on-demand delivery, which is why DoorDash's addition of delivery of items besides food hasn't turned its bottom line positive.

A delivery company may eventually solve the scaling dilemma, perhaps with cheap autonomous drones. That time has not yet arrived, though, and simply expanding into Europe won't change the basic delivery equation. Buying Wolt will almost certainly increase DoorDash's revenue significantly, but its new subsidiary is also generating net losses and is likely to just make the combined entity's overall net losses even larger.

So is DoorDash is a buy among food delivery stocks after its big acquisition?

The answer is probably found in something impossible to quantify directly: traders' general liking for the stock. Short-term sentiment likes DoorDash and dislikes Just Eat, meaning that DoorDash is arguably a better buy. DoorDash's Wolt acquisition is bullish because Wall Street valued it favorably, even though it's very similar to Just Eat's Grubhub acquisition, which Wall Street valued negatively because of its feeling about Grubhub.

Buying Wolt should give DoorDash several quarters of flashy revenue-growth news with which to reinforce Wall Street's current optimism. It will also probably be strongly accretive to the bottom line if DoorDash solves the scaling problem.

These facts could prolong DoorDash's bull run well into 2022, and maybe into 2023. Its long-term fate is extremely uncertain, and buying Wolt won't change that, but if you're seeking short-term gains, it looks like a potentially viable food delivery stock.