For the full year, Pure Storage expects its revenue to rise 25% to $2.1 billion. That easily surpassed analysts' expectations for 21% growth, and would mark a major acceleration from its 2% growth in fiscal 2021. 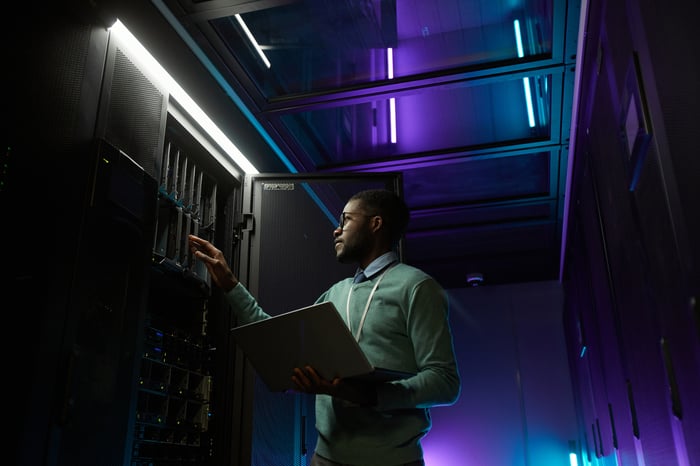 Pure Storage's growth rates are impressive, but is it too late to buy the stock? Let's take a fresh look at its business and valuations to find out.

What does Pure Storage do?

Pure Storage initially built its storage appliances with third-party solid-state drives (SSDs). But it eventually replaced those SSDs with its own proprietary hardware, and launched integrated deduplication, compression, and artificial intelligence software to help companies save storage space and properly configure their devices. It generated 65% of its revenue from those hardware and software products in the first nine months of fiscal 2022.

It also provides its own storage-as-a-service solutions, which blend together on-premise data storage solutions with public cloud services for hybrid cloud customers. Those subscription-based plans generated the remaining 35% of its revenue in the first nine months of the year.

Pure Storage controlled 13% of the all-flash array market at the beginning of 2021, according to Gartner. That puts it in third place behind Dell (NYSE:DELL), which controls 33% of the market through EMC, and NetApp (NASDAQ:NTAP), which holds a 20% share.

How fast is Pure Storage growing?

In fiscal 2021, Pure Storage's growth decelerated as big companies throttled their spending on data storage upgrades throughout the pandemic. However, its subscription business remained resilient, and it continued to expand throughout fiscal 2022 as its product segment gradually recovered:

Pure Storage also acquired Portworx, a cloud-native data storage and management platform, for $370 million last September, and integrated it into its ecosystem of subscription services.

Next year, analysts expect Pure Storage's revenue to rise about 16% as the post-pandemic comparisons normalize. The stock trades at less than four times that forecast, so its price-to-sales ratio still looks surprisingly reasonable.

How profitable is Pure Storage?

Pure Storage still isn't profitable on a generally accepted accounting principles (GAAP) basis yet, mainly due to the high stock-based compensation expenses, which consumed 14% of its revenue in the first nine months of fiscal 2022. However, it still narrowed its GAAP net loss year over year -- from $229.8 million to $158.2 million -- during that period.

Meanwhile, Pure Storage's non-GAAP gross margins have held steady at about 70% this year as its non-GAAP operating margins have improved significantly:

Pure Storage's gross margin was squeezed by higher supply chain costs for its products segment in the third quarter. However, the gross margin of its subscription business remained stable as lower travel and physical marketing expenses boosted its operating margins.

It expects its operating margin to rise to 14% in the fourth quarter and 10% for the full year. Analysts expect its adjusted earnings to increase 175% this year and grow another 26% next year.

Pure Storage's stock might initially seem a bit pricey at over 50 times forward earnings, but its growth rates arguably justify that higher multiple.

So is Pure Storage's stock worth buying?

Pure Storage's growth rates and valuations are attractive, but investors should recognize its weaknesses. It still faces intense competition in the all-flash array market from more diversified competitors, and NAND prices are cyclical. If NAND prices unexpectedly surge again, its gross margins will drop and its data center clients could pivot back toward cheaper HDD-based solutions.

That said, I believe Pure Storage is still a solid long-term investment on the secular shift away from HDD-based storage solutions. Therefore, it still isn't too late to buy the stock, even after its year-to-date rally of nearly 40%.