The company's sails are currently filled by a favoring wind, but it also operates in a highly cyclical industry, raising questions about how long its gains will last. 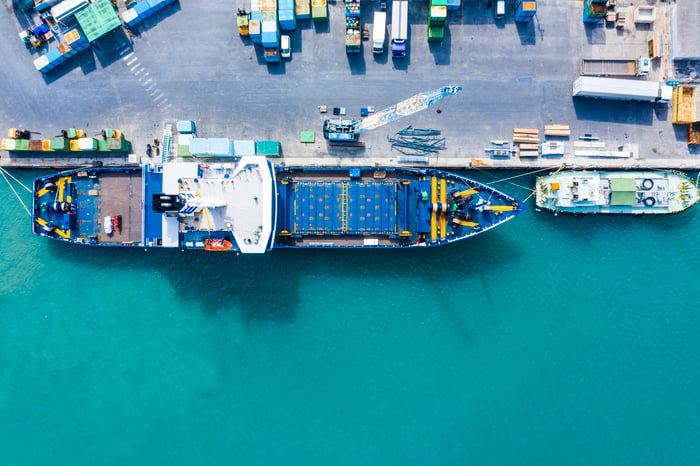 A good year and solid gains for the shipping company

Golden Ocean has been thriving during 2021, a fact highlighted by its Q3 earnings report. Total revenue for the quarter soared 108.8% year over year, rising from 2020's $185.6 million to this year's $387.6 million. Figures for the first nine months of the year were almost equally positive, jumping approximately 87% to $821.4 million. At the bottom line, the company's $195.3 million in net income rose 399% year over year, while for the first nine months, net income totaled $323.4 million versus 2020's $61 million net loss during the same period. Adjusted earnings per share (EPS) also rose strongly, showing the company hasn't significantly diluted its stock.

The shipper started 2021 with $153 million in cash, a sum it has now built up to nearly $242.4 million. It has acquired or ordered 25 new vessels while selling off several older ships, keeping its fleet modern and functional. Among the ships are seven latest-generation ECO-type Kamsarmax vessels. These are large, shallow-draft ships with high fuel efficiency, capable of meeting modern environmental standards.

On the financial front, Golden Ocean continued to pay dividends. The company originally suspended its dividend in the last months of 2019, but it resumed paying again as the successes of 2021 unfolded. In its Q3 earnings report, it announced a 70% increase in quarterly dividends to $0.85 per share per quarter.

While conditions at some of the West Coast ports have eased, dry bulk ship services are still in extremely high demand, significantly outstripping supply. Golden Ocean cites several research sources in the presentation accompanying its Q3 earnings report, including Baltic Exchange data indicating bulk cargo fleet utilization is at 98%. Simultaneously, net cargo fleet growth is at its lowest in years, estimated to be 2.7% in 2021, 1.9% in 2022, and 1.6% in 2023, because of the difficulty of securing financing and a manufacturing bottleneck caused by new emissions regulations, as revealed by Arctic Securities Research.

In practical terms, the demand for cargo ship services is "maxed out," with almost all dry bulk ships already accounted for. The extremely low rate of new vessel production means the supply of cargo ships also won't increase significantly within the next two years. Basic economics decree limited supply and powerful demand will result in strongly supported, and likely growing, prices for shipping services.

Noting the role of government stimulus and economic activity in driving the need for shipping, CEO Ulrik Andersen said on the earnings call that "GDP growth is a good proxy for dry bulk demand." He added that stimulus is "tapering off," but "because the fleet growth is decelerating hard, demand even at normalized levels will still comfortably grow faster than the supply," predicting continued strong performance for the company in 2022 and 2023.

The near-total utilization of the current dry bulk shipping fleet, and that fleet's extremely slow growth for at least two more years, look strongly bullish for Golden Ocean. Demand for materials and the means to get them across the ocean to customers appears unlikely to slacken anytime soon. Despite the cyclical nature of shipping companies' fortunes, Golden Ocean and similar transportation stocks may have smooth sailing and profitable growth locked in during the short to medium term. However, the long term should be treated with more caution, and a reevaluation down the road will be appropriate.