Sea Limited (NYSE:SE), a leading technology conglomerate based in Singapore, announced its fiscal third-quarter results for 2021 on Nov. 16, 2021. Revenue has more than doubled to $2.7 billion while gross profit jumped 148% to $1 billion. While the top line grew strongly, adjusted earnings before interest, tax, depreciation, and amortization (EBITDA) turned red as Sea invested heavily to grow its business.

But there are more to these headline numbers. Here are three major takeaways investors should know. 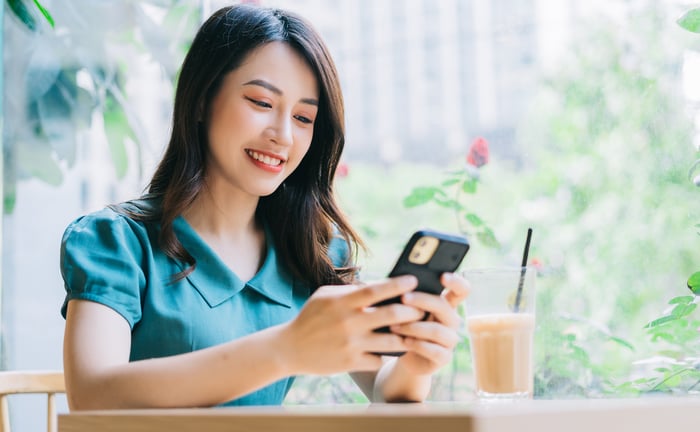 Garena's growth is slowing down

Garena, Sea's gaming business segment, delivered a steady performance in the latest quarter. Bookings grew 29% year over year to $1.2 billion on the back of higher quarterly paying users (up 43% to 93 million). Consequently, adjusted EBITDA expanded 22% year over year to $715 million.

While Garena delivered a commendable performance, investors were rather disappointed with the weaker numbers as compared to previous quarters. For example, Sea's gaming bookings surged 65% to $1.2 billion while adjusted EBITDA jumped 70% to $741 million in the second quarter of 2021. Comparatively, the latest quarterly numbers are slightly weaker.

It is not unreasonable to see slower growth for Garena thanks to its already gigantic size -- it already has 729 million quarterly active users (QAU) as of the latest quarter. The huge user base makes it much more difficult for Garena to grow its user base at historical rates. Slower user base growth, in turn, slows Garena's booking growth.

Still, there is room for Garena to increase its bookings. As a start, it can increase its average bookings per user (currently at $1.7 per quarter). It can also convert non-paying users into paying users since paying users account for only 12.8% of its QAU. And even if Garena has exhausted all its growth opportunities, Sea can still sustain its growth momentum through other businesses (more on this below).

Garena's growth might be slowing down, but Sea has other cards in its deck to sustain its growth. And that's Shopee, Sea's e-commerce arm.

In the latest quarter, Shopee continued to expand in its existing markets (like Indonesia and Taiwan) and also entered new regions like Brazil, Europe, and India. Consequently, the e-commerce arm reported some solid growth stats -- revenue grew 134% to $1.5 billion, gross order rose 123% to 1.7 billion, and gross merchandise revenue (GMV) jumped 81% to $17 billion. Shopee's aggressive expansion plan also more than doubled its loss from a negative adjusted EBITDA of $302 million last year to $684 million this period.

To sustain its growth momentum, Shopee is actively investing in its offerings to improve its value proposition. For example, Shopee launched an incentive program, Seller Missions, to reward sellers. Under this program, sellers will earn special privileges after they complete the tasks assigned to them. To improve user engagement, Shopee is offering incentives, such as shipping cost subsidies, and also adding new product categories -- such as Shopee Premium, a dedicated space on Shopee offering luxury brands -- to keep buyers coming back to its platform. While not all efforts will be successful, Shopee is trying its best to remain the preferred e-commerce platform for its stakeholders.

Management also expressed its confidence in Shopee's growth story by raising its full-year guidance for revenue to be between $5 billion and $5.2 billion, according to generally accepted accounting principles (GAAP), up from $4.7 billion and $4.9 billion.

What to expect from Sea in the coming quarters

As a start, Garena will most likely focus on monetizing its user base in the coming months. And while Garena's revenue growth is likely to slow down, it will still march upward so long as Sea can improve user monetization over time.

E-commerce, on the other hand, should continue to grow at a high double- or even triple-digit rate as Sea surfs the e-commerce tailwinds in underpenetrated regions such as Southeast Asia and Latin America. Moreover, Shopee is actively testing new markets in India and Europe. Hence, there's a decent chance that Shopee may succeed in some of these new frontiers.

On top of that, Sea is always experimenting with new business models, which may lead to new opportunities. To this end, one of the most promising businesses is SeaMoney (Sea's fintech arm) which has already seen solid traction. SeaMoney already reached 39 million quarterly paying users for its mobile wallet services and processed close to $5 billion in payments volume for the third quarter of 2021, up 111% year over year. These numbers will likely expand over time as SeaMoney reaches more users and expands its use cases.

Combined, Sea is well-positioned to sustain its high growth rates in the coming quarters.