Shares of Ambarella (NASDAQ:AMBA) stock took off like a rocket Wednesday morning after the artificial intelligence company announced a big earnings beat after close of trading Tuesday. 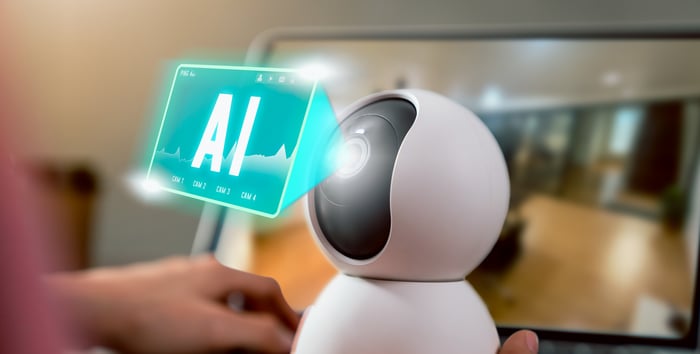 The news wasn't entirely as good as it sounded. Ambarella's profit number, noted above, while better than Wall Street expected, was of the pro forma variety. When profit is calculated according to generally accepted accounting principles (GAAP), Ambarella earned only $0.02 per share for the quarter. Still, that was a whole lot better than the $0.49-per-share GAAP loss Ambarella endured in Q3 of last year. The news on the revenue front, meanwhile, was unqualifiedly good. Ambarella's sales leaped 64% in Q3, thus accelerating from a rate of growth that has seen revenues year to date up "only" 50%.

At the same time, Ambarella not only maintained but slightly improved its gross profit margin enjoyed earlier in the year, posting a 62.5% gross margin in Q3 (62.4% for the year to date).

CEO Fermi Wang attributed the improvements in Ambarella's results largely to the company's high-margin "transformation into a deep learning AIoT processing company," with AIoT being a combination of two techie terms -- artificial intelligence and Internet of Things. He predicted that Ambarella's acquisition of "advanced algorithms for high definition imaging radars" company Oculii would continue driving results higher in the long term.

In the nearer term, Ambarella guided investors to expect revenues between $88.5 million and $91.5 million in Q4, with gross margins continuing to creep higher and operating costs falling sequentially from Q3 levels. While management didn't give a firm profits prediction, that still seems to point to growing profits in the year's final quarter, giving investors plenty of reason to bid Ambarella stock up today.