AT&T (NYSE:T) was once considered a stable blue-chip stock for income investors. But over the past five years, the telecom and media giant lost about 40% of its market value, and its stock now languishes near a 12-year low.

AT&T's decline can be traced back to three big mistakes. First, it bought DirecTV for $49 billion in 2015 in an ill-fated attempt to expand its pay-TV business. Second, it acquired Time Warner for $85 billion in 2018 in an eleventh-hour attempt to build a streaming media ecosystem. It bit off far more than it could chew in both deals, and its long-term debt skyrocketed. 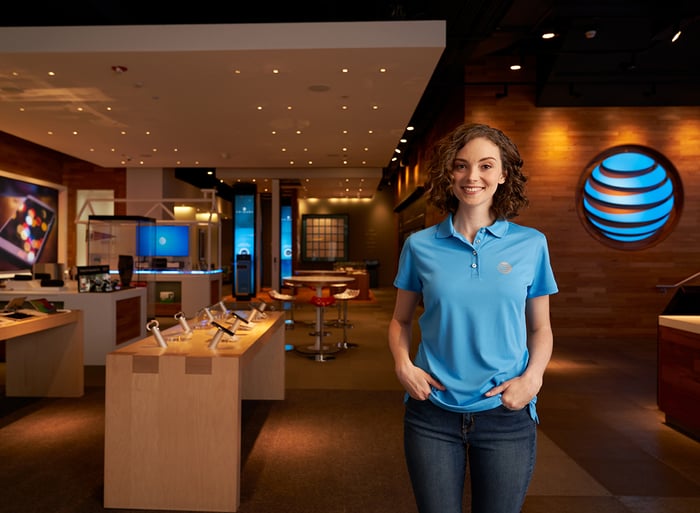 Lastly, AT&T was so distracted by its media expansion that its wireless business stagnated. Last year, T-Mobile (NASDAQ:TMUS) surpassed AT&T as the second-largest wireless carrier in the U.S. by merging with Sprint, and its 5G network had a wider coverage area than Verizon (NYSE:VZ) and AT&T.

Those setbacks were disappointing, but the stock now trades at just seven times forward earnings, while paying a massive forward yield of 9.1%. Should investors consider buying AT&T as an undervalued dividend play?

First the good news on AT&T...

Over the past year, AT&T took some steps to reverse its worst decisions. In May, it announced it would spin off WarnerMedia (most of Time Warner's media assets) and merge that spin-off with Discovery (NASDAQ:DISCA) (NASDAQ:DISCK) to create a stand-alone company by mid-2022. AT&T's current investors will receive shares of that new company.

In August, AT&T spun off DirecTV (including AT&T TV and U-verse) into a new stand-alone company. AT&T retained a 70% stake in that new company, while the investment firm TPG bought the remaining 30%.

AT&T also divested several of its smaller businesses -- including its Latin American satellite subsidiary Vrio, the mobile gaming publisher Playdemic, the tabloid news site TMZ, and the anime platform Crunchyroll -- along with some of its real estate to further streamline its business.

AT&T believes this strategy will free up more resources for the expansion of its 5G network, as well as reduce the mountain of long-term debt it accumulated from its DirecTV and Time Warner deals. It believes the ratio of its net debt to its adjusted earnings before interest, taxes, depreciation, and amortization (EBITDA) will drop from a "peak" of 3.1 at the beginning of 2021 to 2.5 or lower by the end of 2023.

After spinning off WarnerMedia, AT&T expects to grow its annual revenue at a low-single-digit compound annual growth rate (CAGR) from 2022 to 2024, and for its adjusted EBITDA and adjusted earnings per share (EPS) to both rise at a mid-single-digit CAGR. In other words, the "new" AT&T's growth rates could look more stable and comparable to Verizon's.

AT&T is finally taking some steps in the right direction, but it still faces tough challenges. Merging WarnerMedia with Discovery will create a larger media company, but the combined entity could still struggle to keep pace with bigger players like Netflix and Disney in the cutthroat streaming market. Therefore, the "new" Discovery might not fare much better than the old one -- which already lost 14% of its value over the past five years.

AT&T will also reduce its dividend after it spins off WarnerMedia. It expects the "new" AT&T to generate at least $20 billion in free cash flow (FCF) on its own, then pay out 40%-43% of that total in dividends. Meanwhile, the WarnerMedia spin-off probably won't pay any dividends at all, since it would be smarter to conserve that cash for its streaming investments instead.

When AT&T set that cash dividend payout ratio earlier this year, its stock price implied it would pay a forward yield of 4%-5%. However, AT&T's stock subsequently declined and boosted that yield to about 7%-8%. Some investors might believe AT&T will honor its prior commitment and stick with that massive yield after its spin-off. But if AT&T's stock price remains in the low $20s, it might reduce its payout ratio and that massive yield to conserve more cash.

AT&T needs that cash because its wireless business still faces near-term challenges. At a recent Wells Fargo conference, communications chief Jeff McElfresh warned that AT&T's wireless growth could "subside" in 2022 after stimulus checks and new 5G devices boosted its sales in 2021. That downbeat outlook, along with intense competition from T-Mobile and Verizon, could make it tough for the new AT&T to generate stable growth.

AT&T is trying to stitch up its self-inflicted wounds, but the market doesn't have much confidence in its turnaround efforts. Analysts still expect its revenue to decline both this year and next year (without factoring in the upcoming spin-off) and for its earnings growth to remain anemic.

Investors should realize that AT&T's stock is cheap for obvious reasons, and they shouldn't buy it until some green shoots actually start to appear.