Last month, Pfizer (NYSE:PFE) announced that the European Commission (E.C.) had authorized the company's Xeljanz immunology drug to treat adult ankylosing spondylitis -- a kind of arthritis affecting the spine and large joints -- if patients had failed at least one other therapy.

Why did the E.C. approve Xeljanz for its fifth indication in the European Union (E.U.)? And what is the sales potential of the label expansion for the pharma stock? Let's dive into these questions. 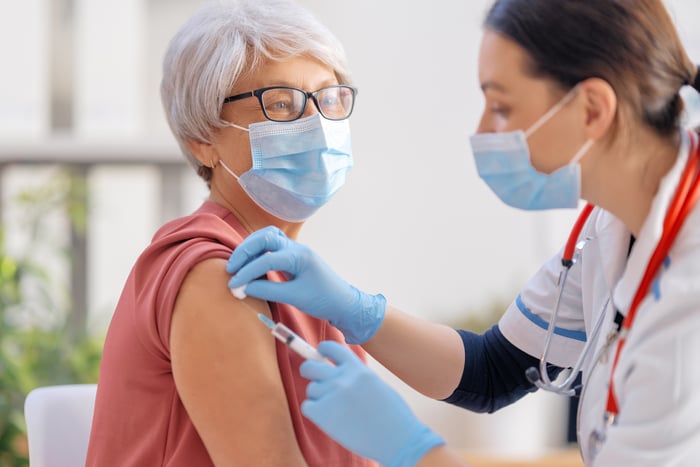 Paraphrasing the Mayo Clinic, ankylosing spondylitis is an inflammatory disease that can gradually cause bones in the spine to fuse together. This can result in stiffness and pain in the lower back and hips as well as increased risk of a compression fracture in the spine and even heart issues.

As with most medical conditions, prompt and regular treatment by a doctor could improve a patient's quality of life and prevent further deterioration in the condition. This is especially true as more drugs come to market. Based on results in phase 3 clinical trials last year -- and the E.C.'s recent approval -- Xeljanz could be a critical treatment for many ankylosing spondylitis patients in the E.U.

Let's take a closer look at the phase 3 study. It included 269 adult patients who failed previous therapies, such as nonsteroidal anti-inflammatory drugs (NSAIDs). Participants were randomly selected to receive 5 milligrams of Xeljanz or a placebo on a twice-daily schedule over 16 weeks. The outcome: Xeljanz proved significantly more effective than the placebo. In sum, 40.6% of patients taking it experienced a meaningful reduction in back pain, physical function, and inflammation -- more than triple the 12.5% rate of the placebo.

A boost to the immunology segment

So Xeljanz appears to be a solid treatment option for patients who don't respond to NSAIDs. But what level of sales will that translate into for the ankylosing spondylitis label in the E.U.? Well, there are more than one million patients in the E.U. living with ankylosing spondylitis, according to Pfizer. Given that 20% to 30% of them fail NSAIDs, this translates into an addressable market of 200,000 to 300,000 patients. Let's conservatively assume 200,000.

Another factor to consider is competition. Xeljanz's 40.6% rate of pain reduction was a bit below the 45% rate for AbbVie's (NYSE:ABBV) Rinvoq. However, while the two drugs are both in the Janus kinase (JAK) inhibitor class, they are different types. Xeljanz inhibits the JAK 3 gene while Rinvoq inhibits the JAK 1 gene. So I believe Xeljanz can seize a modest 12% of this market. This would equate to 24,000 patients.

Then there's the price. I estimate that the current annual list price for Xeljanz in the U.S. is around $60,000. But most patients end up paying nowhere near this much out of pocket. That's because 99% of commercially insured patients in the U.S. are covered for rheumatoid arthritis, and insurance companies can negotiate lower prices with Pfizer. So I will assume an annual net price of $35,000 per patient in the U.S.

Given that drug prices in the E.U. are approximately half that of the U.S., I will use an annual net price of $17,000 per patient. This works out to more than $400 million in annual revenue potential -- or approximately half a percent of Pfizer's estimated $81.5 billion in revenue for this year. However, it represents a more meaningful 10% contribution to Pfizer's immunology segment.

A dividend increase could be around the corner

While Xeljanz's potential contribution to Pfizer's revenue from this new indication may not be huge, it's important to remember that even incremental successes can help a company at the margin.

At the same time, Pfizer offers investors a well-covered 3% dividend yield -- more than double the S&P 500's 1.3% yield -- and Motley Fool's David Jagielski believes the company's strong fundamentals could set it up for a double-digit dividend increase later this month.  On top of that, the shares are trading at a forward P/E ratio of just under 13, which is cheap considering that analysts are expecting 13.6% annual earnings growth over the next five years. So all in all, Pfizer looks to be a buy at this time.