Lucid Group (NASDAQ:LCID) has gained a lot of attention since it went public by merging with a special purpose acquisition company (SPAC) earlier this year. The electric vehicle (EV) maker only started shipping its first batch of vehicles in late October, but it's already valued at more than $74 billion.

That's 34 times the $2.2 billion in sales Lucid hopes to generate in 2022 by shipping 20,000 vehicles, and makes it nearly as valuable as Ford (NYSE:F) -- which shipped 4.2 million vehicles last year but trades at less than one times this year's sales. Tesla (NASDAQ:TSLA), which shipped 627,350 vehicles throughout the first three quarters of 2021, has a much higher market cap of $1 trillion, but still trades at 20 times this year's sales. 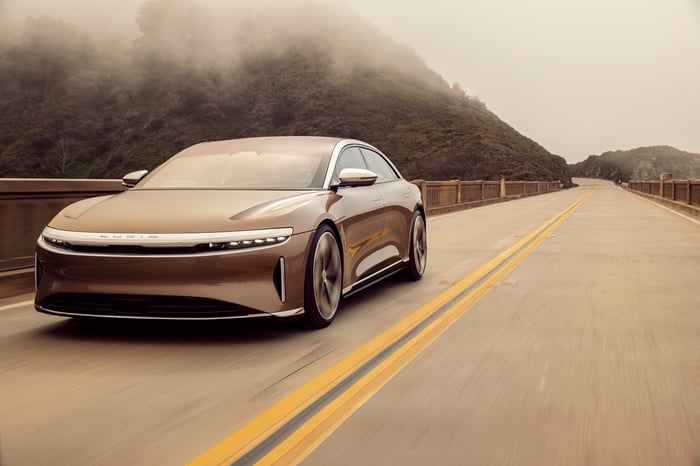 In other words, Lucid is still a highly speculative stock. The bulls claim Lucid will hit its production targets next year and continue to expand. They'll also point out that Lucid's Air sedans can travel up to 520 miles on a single charge, which easily beats Tesla's longest-range vehicle (the Model S Long Range) by more than 100 miles. The bears believe Lucid will struggle to hit its production targets and struggle to stand out in the crowded EV market.

Anyone who has followed Lucid over the past month likely spotted a green flag followed by a red flag for this hot EV stock. Let's review these two developments to see if they tilt the scales in favor of the bulls or the bears.

On Nov. 15, Lucid posted its third-quarter earnings report. It generated less than a million dollars in revenue, since it hadn't started shipping its vehicles yet at the end of the quarter, and booked a net loss of $1.5 billion.

However, Lucid also said it had surpassed 13,000 reservations at the end of September, and that figure had since risen to more than 17,000. It also had more than $1.3 billion in estimated bookings. Those numbers strongly indicate Lucid can hit its revenue targets next year, as long its production goes smoothly and it doesn't suffer any major supply chain disruptions.

Lucid's manufacturing plant in Arizona (AMP-1) currently has an annual production capacity of 34,000 vehicles. It recently kicked off AMP-1's Phase 2 expansion, which will boost its annual capacity to 90,000 vehicles. The company also outlined its ambitious overseas expansion plans -- which will start with Canada in the fourth quarter of 2021, followed by Europe, the Middle East, and Africa (EMEA) in 2022, and China in 2023.

In short, Lucid's stock might look expensive right now, but its high price-to-sales ratio might be justified by the market's pent-up demand for its vehicles and its aggressive expansion plans.

The red flag: The SEC subpoena

On Dec. 6, Lucid revealed that it had received a Securities and Exchange Commission (SEC) subpoena which "appears to concern" its SPAC-backed reverse merger as well as "certain projections and statements." Lucid didn't reveal any other details, but said it was "cooperating fully with the SEC in its review." The subpoena doesn't indicate Lucid did anything wrong, but the ongoing investigation could throttle the stock's near-term gains.

Although, investors should remember that Tesla also weathered SEC probes in the past. The SEC started to probe Tesla's Model 3 production numbers in mid-2018 and ended that investigation at the end of 2019. In early 2020, Tesla was hit by a new SEC probe related to its financial data and contracts. Earlier this month, the SEC launched yet another probe into Tesla after a whistleblower raised safety concerns about its solar panels. But none of those developments kept investors away from Tesla: Its stock has still rallied nearly 1,300% over the past three years.

Over the long term, the market might react to Lucid's SEC subpoena in the same way. Unless the SEC uncovers something that actually impacts Lucid's reservations or long-term projections, I expect most investors to consider the agency's subpoena to merely be a temporary speed bump.

Does the good news offset the bad news?

Lucid is a very risky investment, and investors shouldn't be surprised if any negative headlines or setbacks suddenly cut the stock in half. That said, its recent reservation numbers and promising expansion plans easily offset the threat of an SEC investigation. Therefore, the green flag appears to outshine the red one -- and Lucid's stock still might be worth buying.