Despite short-term disruptions, the branded food company should remain a long-term winner.

Branded food giant General Mills (GIS -2.68%) saw its stock price drop more than 4% on Dec. 21 when it reported an earnings miss in its fiscal 2022 second quarter (Q2). While its shares have bounced back somewhat since then, the factors leading to its earnings miss -- inflation, rising expenses, and its decision not to raise prices -- all remain.

However, the company still has a lot going for it and is worth a look as a longer-term  investment. Here are two important takeaways from its current situation.

Triggering Wall Street disfavor, General Mills saw net earnings drop 13% year over year to $597 million in the second quarter. The culprit: rising expenses. The company saw a 400 basis-point drop in gross margins and a 350 basis-point decline in operating margins. These drops would have been higher if General Mills hadn't raised its prices somewhat, but those increases still weren't enough to cancel out the surge in expenses. Meanwhile, revenue was up 6% over last year's second quarter. 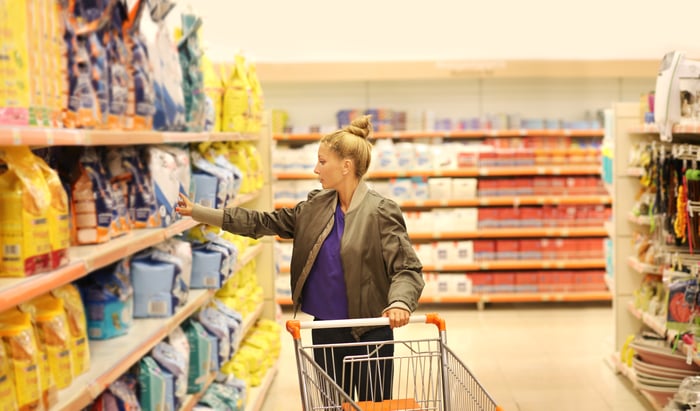 The company recognizes its current challenges. As chief financial officer, Kofi Bruce, remarked during the Q2 earnings conference call, General Mills is experiencing an "eight to tenfold increase in the amount of disruptions in our supply chain" with similar disruptions expected through the end of its fiscal year (mid-2022). Ingredient-cost inflation was pegged at 8% to 9%.

Asked if the company intends to raise prices to offset the increased expenses, North American Retail Group President Jonathon Nudi responded that General Mills is "trying to take a long view from a pricing standpoint" while CEO Jeffrey Harmening added that "over the longer-term ... the supply chain will get more efficient." Toward that end, General Mills has taken steps to improve its own internal supply chain. This includes developing strong, productive capabilities in Asia, which the company expects will help reduce its costs.

General Mills, in short, is avoiding full-bore price increases because it is seeking to remain competitive -- and hoping that inflation problems will ease and supply-chain improvements will bring down costs. But could the company be hamstringing itself by refusing to boost prices, which would raise earnings and win back investor confidence?

The answer hinges partly on how long supply-chain problems and inflation are going to last -- with analysts giving wildly differing forecasts. The Wall Street Journal expects the Biden administration's policies, including an increase of the federal debt to 123% of GDP, to continue driving inflation for years.

The Federal Reserve, on the other hand, believes inflation could fall to as low as 2.2% by the end of Q3 next year -- and even lower in 2023. At his Dec. 15 press conference, Federal Reserve Chairman Jerome Powell said, "We continue to expect inflation to decline to levels closer to our 2 percent longer-run goal by the end of next year." This is a much more optimistic forecast and would be great for General Mills if correct.

In my opinion, General Mills is relatively well-positioned to overcome both the supply-chain and inflation hurdles. But if these issues remain, the company still has the option to raise prices, which won't make it significantly less competitive since its rivals will also have to respond to similar conditions.

The two-year picture (comparing 2021 to pre-pandemic 2019) is more encouraging, showing that General Mills grew both its top and bottom lines -- a fact that's masked by today's inflationary trends. So underneath the temporary storms of supply-chain bottlenecks and an economy in the grip of inflation, a clear trajectory of growth is continuing.

Meanwhile, General Mills isn't sitting idle and coasting on its past successes. Rather, it appears to be responding flexibly to changing conditions.

For example, it's focused on building up its pet food category, which has seen persistently stronger demand. Its acquisition of the Nudges, True Chews, and Top Chews pet treat brands from Tyson Foods earlier this year helped its Q2 pet food revenue soar to $593 million, a 29% year-over-year increase. The acquisition accounted for about half of the gain with solid, organic growth providing the rest. CEO Jeff Harmening believes General Mills has "a long runway of strong, profitable growth ahead for our combined pet food business."

Certainly, current trends back that up. About 10 million additional pets are now owned in North America since COVID-19 arrived, according to research by grain company Scoular. Not surprisingly, pet food sales have shot up too, rising 6.9% for the 52 weeks ended Nov. 27. That's three times the increase for food sales generally, according to NielsenIQ (NLSN) research reported by The Wall Street Journal.

General Mills is also taking the initiative to build out its worldwide presence. About a third of its revenue is now international, thanks in part to strong growth in Asia and Latin America. Operating profit is also surging in the convenience store and foodservice category, up 20% year over year for the quarter and 33% for six months as the "great reopening" continues.

While inflation and supply-chain disruptions are causing some trouble for the company's bottom line, people -- and their pets -- still need to eat, and General Mills appears to be positioning itself to stay lean and competitive among food stocks. It's well worth considering as a potentially tasty investment.