Please ensure Javascript is enabled for purposes of website accessibility
Log In Help Join The Motley Fool
Free Article Join Over 1 Million Premium Members And Get More In-Depth Stock Guidance and Research
By Anders Bylund – Feb 15, 2022 at 7:51AM

The second largest crypto name made it more than halfway to that milestone in 2021.

The Ethereum (ETH -5.57%) cryptocurrency carries a total market value of $348 billion today. That's more than 18% of the total cryptocurrency market, which clocked in at $1.89 trillion at 2 p.m. ET on Monday afternoon. Will the second-largest cryptocurrency's market cap reach the $1 trillion benchmark in the next three years? Let's take a look.

How big would that move need to be?

But the last three months have been rough, as investors of all stripes have backed away from high-risk options such as cryptocurrencies and growth stocks. After a 40% drop, the Ethereum blockchain network's token needs to gain roughly 187% to reach a full trillion dollars from today's prices.

So we're looking at Ethereum prices nearly tripling over roughly three years. Historically speaking, that's a pretty low bar to clear. The token has gained 2,260% over the last three years, for example -- including that 40% plunge from November's peak. Viewed in a different light, Ether has gained roughly 187% in the last 13 months. Of course, the ride has not been smooth, but the kind of move required for Ether to reach $1 trillion from here has been fairly commonplace so far. And it was more than just a sectorwide rising tide that lifted all cryptocurrency boats. Ethereum achieved this near-tripling gain while larger peer Bitcoin (BTC -5.34%) only rose 24%, roughly in line with the stock market. 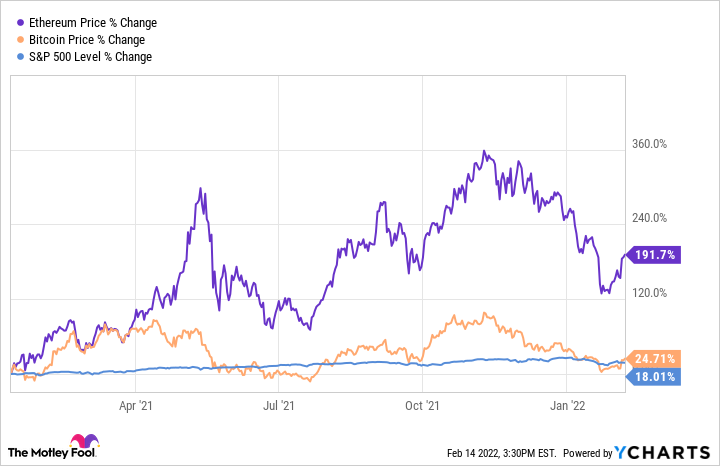 So why would Ethereum make that big leap?

The Ether token has several important price-boosting tailwinds at its back.

I wouldn't hold my breath waiting for the legislative and regulatory processes to grind their wheels, but the other three price drives could catch fire at any moment. In particular, Ethereum's technology upgrades should take full effect no later than 2023. Some of the upside from that event has probably been priced into Ethereum's tokens already, but we have not seen the full effect yet.

So yes, I expect Ether's market cap to exceed $1 trillion by 2025, and quite possibly by a large margin. The Ethereum network has some growing up to do, and investors should be able to take advantage of that constructive process.

What Is the Future of Ethereum After The Merge?

Here's My Top Cryptocurrency to Buy in September

Why Ethereum Has Plunged After The Merge

With Ethereum's 'Merge' Now Complete, Another Huge Network Upgrade Is Coming in 2023