Please ensure Javascript is enabled for purposes of website accessibility
Log In Help Join The Motley Fool
Free Article Join Over 1 Million Premium Members And Get More In-Depth Stock Guidance and Research
By Howard Smith – Sep 8, 2022 at 11:19AM

A new partnership might have just launched Rivian into its next phase of growth.

Rivian said it has signed a memorandum of understanding with the Mercedes-Benz Van division of Daimler AG for a new joint venture to manufacture electric vans. The vehicles will be tailored for individual customers similar to the electric delivery vans (EDVs) Rivian currently produces for Amazon. 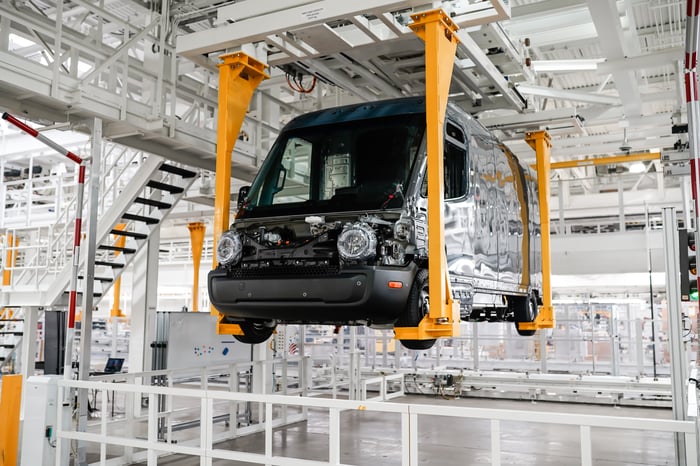 The large electric vans will be manufactured in Europe for both Mercedes-Benz and Rivian customers. While the plan is to build a new factory for the venture, it will leverage an existing Mercedes-Benz site in Europe, according to a joint statement from the companies.

Production is planned to begin "in a few years" with two types of vans based on the electric-only platform of Mercedes-Benz Vans and the Rivian Light Van (RLV) platform. Mathias Geisen, head of Mercedes-Benz Vans, said in a statement, "We are sharing investments and technology because we also share the same strategic ambition: accelerating the electrification of the van market with sustainable and superior products for our customers."

The partnership is an expansion for Rivian's van business. It currently produces its EDV for use by Amazon in last-mile deliveries. Rivian makes those vans at its Illinois factory and expects to supply up to 100,000 to the e-commerce giant through this decade.

Rivian investors are cheering today for the company's new plans for a next phase of growth in its commercial product. Partnering with a global automotive leader like Mercedes-Benz also gives added credibility to the EV start-up.

Why Rivian Automotive Fell as Much as 19.1% This Week