Amazon's test of a European Central Bank digital currency could signal that cryptos have a role to play in the future of e-commerce.

The European Central Bank (ECB), just like dozens of other central banks around the world, is working on the rollout of a central bank digital currency (CBDC) that will replace traditional cash. As part of the prototype phase of this rollout, the ECB announced that e-commerce powerhouse Amazon (AMZN -3.38%) would be one of just five participants in the next phase of the trial.

Amazon will be tasked with finding out how a European digital currency might be used for e-commerce. Basically, instead of paying for your Amazon purchases in Germany, Spain, or France with euros, you'd be paying with a digital currency created by the ECB. While the ECB won't make a final decision on whether to move forward with a CBDC launch until 2023, this is the type of development that could eventually be a game-changer for popular cryptos most commonly used for online payments, especially Bitcoin (BTC -0.13%).

What we know about the Amazon trial

Amazon's trial of the CBDC will be handled by its Amazon Payments division. Presumably, the trial will focus on issues like safety, security, and ease of use. The ECB has said that it wants to learn more about the types of real-world user interfaces that can be used with its digital currency. For example, in the case of Amazon, if you put an item in your Amazon shopping cart and proceed to checkout, the ECB doesn't want you to freak out when you are asked to pay with a digital currency you may not recognize or understand. 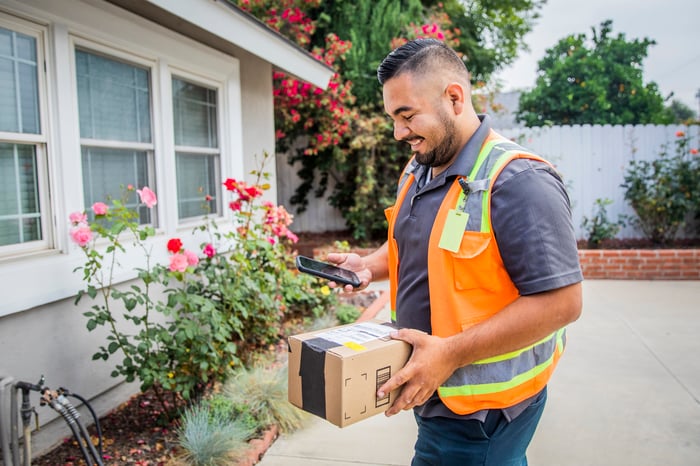 For example, if the CBDC ever launches, the ECB would know that Emmanuel Macron in Paris purchased a new, slim-fit blue business suit jacket for 300 euros on Amazon's French marketplace and paid 30 euros in taxes on the transaction. If this had been purchased with a cryptocurrency, the ECB would only know that the purchase came from a specific digital wallet, but it would not necessarily know the owner of the digital wallet or if any taxes had been paid.

Is this the key to widespread crypto adoption?

While I'm not necessarily happy with the launch of a new privacy-eroding CBDC, I am ecstatic about the potential for these CBDCs to open the door for widespread adoption of all digital currencies as a form of online payment. Right now, you can pay for things online with cryptocurrency, but it is far from mainstream. For example, you can pay with Bitcoin at crypto-friendly online retailer Overstock. Usually, however, you have to find a clever workaround for using Bitcoin online, such as paying for a store gift card with crypto and then using that gift card to shop online.

Mainstream acceptance of digital currency as a form of payment would likely benefit a handful of cryptos that are most commonly accepted by online retailers. The biggest beneficiary, of course, would be Bitcoin. The use of Bitcoin as a form of digital cash would help to fulfill the original dream of Bitcoin founder Satoshi Nakamoto, who envisioned Bitcoin as "a peer-to-peer electronic cash system" back in 2008. If it becomes easy to pay for online purchases with central bank digital currencies, why shouldn't it also be easy to pay for these purchases with a digital currency like Bitcoin?

If digital currencies ever become mainstream for e-commerce (and that's a big "if"), that would presumably silence all the skeptics of Bitcoin, who continually ask what the use-case is for crypto. The answer would be swift and undeniable: "You buy stuff with it."

Why The Graph, Chiliz, and Lido DAO Are Soaring Today