Investors shouldn't give too much importance to the recent midterm elections.

Billionaire investor Warren Buffett has been invested in stocks for decades, and has seen many presidents come and go during that time. And if you're investing for the long haul, you have to be prepared for the reality that your preferred party won't always be in power.

You don't need to get in and out of stocks depending on election results or changes in power. Buffett hasn't let that affect his long-term strategy, and investors would do well to follow a similar approach.

Buffett has said in the past that politics don't necessarily weigh on his investing decisions: "I won't say if my candidate doesn't win, and probably half the time they haven't, I'm going to take my ball and go home." In general, Buffett is just bullish on America and the economy's ability to continue growing and progressing over the long term.

Presidents, after all, can serve just two terms, so unless you're investing for a shorter time frame than that, there can still be time for your investments to bounce back if policies during that stretch negatively impacted businesses in your portfolio.

Investors should focus on fundamentals, not elections

Even if an election turns out favorably, that still doesn't guarantee that certain policies will be put in place or that certain stocks will soar. Take the cannabis industry as an example. When President Biden won the 2020 election, shares of pot stocks took off on the expectation that marijuana reform would be inevitable. In November 2020, shares of cannabis producer Tilray Brands (TLRY -8.62%) skyrocketed 58%.

But no significant marijuana reform has taken place since then. And now with the Republican party regaining control of the House, it may be difficult for anything to happen over the next two years. And so despite all the hype and optimism for Tilray, the stock has gone on to decline 55% since the start of Biden's term in 2021.

Investors would have been better off focusing on the company's fundamentals, which remain problematic. Tilray has consistently reported operating losses and negative cash flow from its day-to-day operations, two things that should have served as significant red flags for investors. 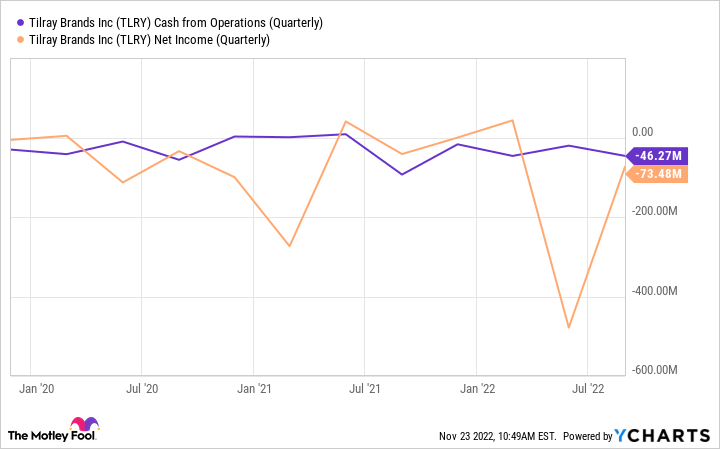 This should have served as a reason to be wary of the pot stock, as opposed to hoping that favorable election results would make up for the company's shortcomings and poor financials. After all, while a president can help create new opportunities, a company still has to be in a good position to take advantage of them should they come up, and Tilray certainly isn't.

Another example of where fears haven't lived up to reality is in the tech world, where many tech investors were concerned that a Democratic win in 2020 could have meant the breakup of companies, including Meta Platforms (META -0.17%), which owns Instagram, WhatsApp, and Facebook. Meta still owns all of those businesses despite what may have seemed like an unfavorable election result. While that doesn't mean a breakup won't happen in the future, it's yet another reminder of why investors shouldn't read too much into elections.

Although Meta's stock hasn't performed all that well of late and is down 60% since 2021, those losses are primarily due to the current bear market and macro conditions in the tech industry that are weighing down many stocks. But with strong fundamentals that include $26 billion in free cash flow over the trailing 12 months and a profit margin of 24%, Meta remains in good shape and may be an attractive stock for long-term investors to add to their portfolios today.