The e-commerce giant has designs on the healthcare industry.

Amazon (AMZN -7.02%) became a household name by revolutionizing the e-commerce industry. It was also instrumental in pioneering infrastructure-as-a-service (IaaS), paving the way for modern cloud computing. In recent years, the company has also made big strides in the digital advertising business. Yet Amazon is always on the lookout for its next big opportunity.

The company hasn't made any secret of its aspirations in the healthcare field. Amazon acquired prescription drug delivery company PillPack in 2018 and announced plans last year to acquire One Medical for $3.9 billion.

Now Amazon is taking the next step in its ambitious goal to revolutionize healthcare, offering a discount prescription drug plan to its Prime members. Will this alter the current healthcare landscape, or is it simply too little, too late? 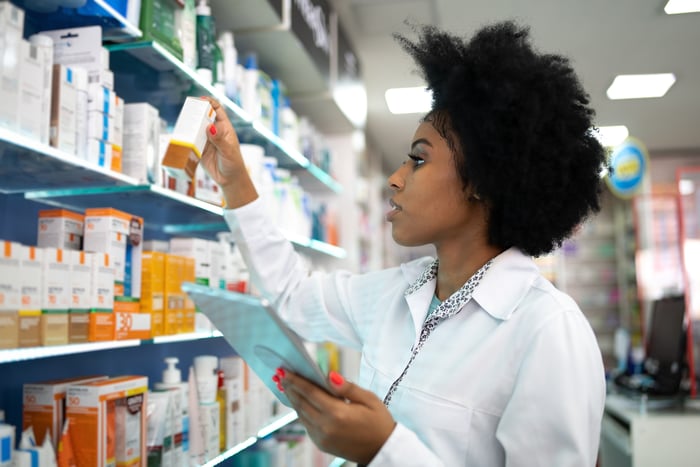 On Tuesday, Amazon introduced RxPass, a subscription plan designed to lower drug costs, available exclusively for Prime subscribers. "Prime members can now receive all of their eligible generic medications for just $5 a month and have them delivered free to their door," wrote Dr. Vin Gupta, chief medical officer of Amazon Pharmacy, in a blog post.

What sets this program apart is that the cost covers as many eligible medications as patients need for one flat monthly fee of $5 -- which includes delivery -- and doesn't increase no matter how many medications the subscriber takes. Medications can be delivered on a monthly basis, or quarterly, depending on the prescription.

Amazon estimates that there are more than 150 million patients in the U.S. who take one or more medications on the RxPass list.

There are limitations, however, as the program isn't available in California, Louisiana, Maryland, Minnesota, New Hampshire, Pennsylvania, Texas, and Washington, as these states have specific prescription delivery regulations. Furthermore, Amazon said, "People with government-funded insurance such as Medicare or Medicaid are not eligible to sign up for RxPass right now."

The company was mum on whether additional medications would be added to the list or if it planned to offer the service in additional states. Also, there was no word regarding future eligibility for those on government-funded insurance plans.

The idea of offering discounted prescription drugs certainly isn't a new one. GoodRx and privately held SingleCare are among the most well-known discount card providers, but Walmart also offers low-cost generics.

Amazon was clear in spelling out that "RxPass is not insurance and is not a substitute for insurance," adding that "[RxPass] can be helpful for those without insurance, or when insurance doesn't cover certain medications."

This program won't be a fit for all Prime members. Of the roughly 200 million Prime subscribers, it's estimated that 168 million are U.S. residents, according to Consumer Intelligence Research Partners.

This suggests that Amazon has a significant target audience for its prescription drug plan. Furthermore, Prime members have already established that they're willing to shell out $139 per year or $14.99 per month to enjoy the benefits of Prime. For those taking medications on the RxPass list, the extra $5 per month will likely be far less than the monthly cost of a prescription -- or multiple prescriptions -- elsewhere.

On the other hand, for those who aren't Prime customers, Amazon isn't likely to attract many converts. The current $139 annual cost for a Prime membership will likely erase any cost savings patients might otherwise enjoy by paying lower prices for a selection of generic prescription drugs.

At best, this is another incremental step in Amazon's long-term foray into healthcare -- but it certainly isn't a game changer.