Despite what you may read in the headlines, picking stocks to find the "next big thing" usually doesn't work out well in the end. For every "it" stock like Tesla Motors, there are a dozen companies whose investors were hoping for a massive payday, but are instead finding the exact opposite.

Actually, most investors who end up with million-dollar portfolios earned them by smart, aggressive saving habits combined with steady, consistently growing stocks. And one of the best ways to do this is to buy a whole lot of what you may think of as "boring" stocks, but that in reality are quite the opposite.

The type of stocks you need

Basically, when investing for the long term, the best way to go about choosing your stocks is to put yourself in a defensive mind-set. In other words, you need to worry more about preventing losses than creating huge gains.

The best way to do this is choose stocks that pay dividends, and have an excellent history of raising those dividends. You'll also want stocks with low volatility, meaning they have less of a reaction to market moves than most stocks. Fortunately, these two concepts tend to go hand in hand.

For a good list of stocks that have raised their dividends for at least 10 consecutive years, check out this list. As you can see, there are quite a few to choose from. A good dividend tends to buoy a stock's price during tough times, since as the price drops, the yield rises and becomes more compelling, attracting buyers.

And to determine a stock's volatility, look for its "beta," which is included in virtually all of the major online stock quote providers. A beta of less than one means the stock has low volatility.

As an example, take a look at AT&T (NYSE:T). The company pays an annual dividend of about 5.3% as of this writing, and it has increased the payout for nearly 30 consecutive years. The stock also has a beta of just 0.45, meaning that if the market drops or rises, AT&T's reaction should be just 45% as intense as the overall market's move.

Winning over the long run is all about the bad years
The most successful long-term investors are the ones who do better than everyone else when the market does poorly.

Basically, what this means is that good performance during bad years matters more to the big picture than beating the market during good years. To illustrate this, let's look at two investments, both with an equal starting value of $10,000, with one in an S&P index fund and one invested in the type of low-volatility defensive stocks we mentioned earlier.

Let's say that the S&P 500 goes down by 25% this year but rises by 30% next year, and that our low-volatility stocks went down by just 10% the first year and up by 15% the second year. Well, the investment in the index fund would now be worth $9,750. So, even though the second year's gains were stronger than the first year's losses, the investment would still lose money because of the devastating effect of really bad years.

But the defensive investment would be worth $10,350, even though it clearly underperformed during our hypothetical great year.

Not so boring anymore
As mentioned, sometimes these types of stocks are considered "boring," especially by inexperienced investors. After all, why invest in companies like Johnson & Johnson, Procter & Gamble, and ExxonMobil when you could buy more exciting companies like Tesla and Amazon.com?

Consider that over the past 20 years the S&P 500 has produced a total return (share price appreciation plus dividends) of about 470%, or about 9.2% on an annualized basis. Sounds pretty good, right? 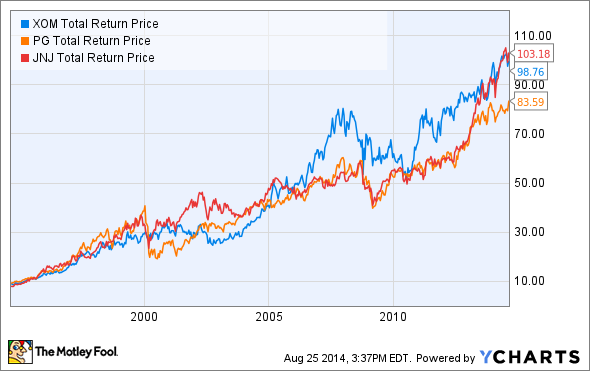