Coming into 2013, investors in gold had enjoyed 12 straight years of gains, giving them high expectations for the future of the yellow metal. Yet the price of gold in 2013 plunged by more than 25%, losing $475 per ounce and remaining just barely above the $1,200 mark at its most recent reading. In hindsight, it's important to understand what precipitated the big decline in the price of gold in 2013 and to figure out what investors can learn from their mistaken optimism.

What caused gold prices to decline in 2013?
In looking at what happened to the price of gold in 2013, it's easy to forget that the gold market had actually been setting the stage for a substantial pullback for several years. Gold hit all-time record highs around $1,900 per ounce in August 2011 before a substantial correction throughout the remainder of the year. Subsequent moves higher in 2012 fell short of that $1,900 high-water mark, leaving those who use various technical-analysis methods somewhat nervous about the yellow metal's prospects entering the year. 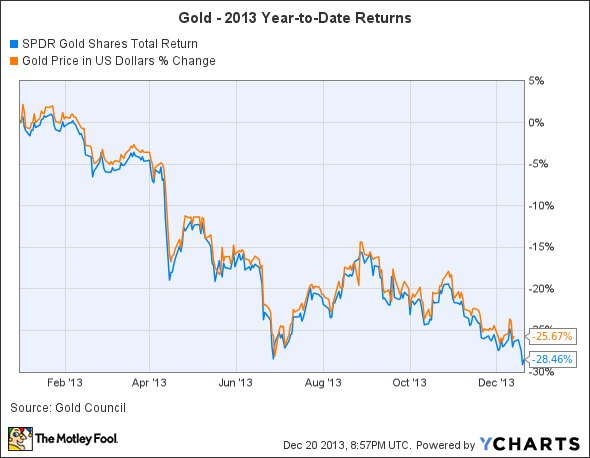 But the real problems for gold became evident to mainstream investors in April, when gold prices plunged $200 in a two-day span to their lowest levels in two years. With the banking crisis in Cyprus going on at the time, gold investors feared that the island nation's central bank would have to liquidate its gold reserves in order to shore up its financial system. That change in sentiment reversed the conventional thinking that central-bank purchases would continue to support the price of gold through 2013.

From there, further gold-price declines stemmed from increasing worries about an imminent shift in the Federal Reserve's monetary policy. For years, one of the underpinnings of the bull-market move in gold had been the Fed's aggressive moves to keep interest rates low. Yet in June, the Fed first signaled that it would consider pulling back on its latest round of quantitative easing, and even the possibility of such a move sent gold still lower, touching the $1,200 level.

An investor exodus?
After the initial drop in prices, two things happened. One was that gold miners' shares got hit even harder, as the decline in the price of gold had an even more dramatic impact on their profit margins. Many small producers suddenly found themselves unprofitable, and even major players Newmont Mining (NYSE:NEM) and Goldcorp (NYSE: GG) took big hits. Specifically, the fall in gold prices led to major decisions to mothball even some of the most promising gold exploration projects. Barrick Gold (NYSE:GOLD) decided to suspend its exploration at its Pascua-Lama site in Chile, threatening not only its own profits but also those of silver-streamer Silver Wheaton (NYSE: SLW), which had taken a stake in the potential silver production from the mine. In other cases, loss of economic viability made decisions from other producers to suspend exploration efforts easier to make but more painful for shareholders.

Second, investors started pulling out of once-popular ways to play the gold market. SPDR Gold (NYSEMKT:GLD), an ETF that allows investors to buy shares that aim to track the price of gold, saw a dramatic drop in the number of shares outstanding. As investors sold off their ETF holdings, market specialists redeemed blocks of ETF shares in exchange for bullion, reducing the amount of gold that SPDR Gold owned. Coming into 2013, SPDR Gold had more than 43 million ounces of gold in its reserves, with a value of $72 billion. Now, the ETF holds about 26 million ounces of gold, down 40% from its year-end 2012 levels, and the drop in gold prices has made that bullion worth just $31 billion.

What's ahead for gold?
Looking to 2014, gold prices could easily remain under pressure for some time. With the Fed's decision earlier this week to start reducing its bond-buying activity, interest rates could continue to move higher in the coming months, putting more pressure on gold investors to liquidate their holdings in favor of income-producing assets. If the moves in the price of gold in 2013 are any indication, sentiment has never been weaker, and whether that will produce a contrarian rally in 2014 or a continuation of the downward trend remains to be seen.

Price of Gold in 2013: Is This Year's $475 Plunge Just the Beginning? @themotleyfool #stocks $GLD $GOLD $NEM Next Article
Current