In the precious-metals arena, gold gets most of the attention. But at least in the recent past, silver has tended to be more volatile than gold, and so those who are bullish on the prospects for precious metals generally have often turned to the silver market to try to maximize their returns. Unfortunately, that tendency for higher volatility worked against silver investors this year, as the price of silver in 2013 crashed almost $11 per ounce, falling 36% and taking spot prices from above $30 per ounce to below the $20 level. Let's look at what moved silver so much and what conclusions you can draw about the precious metal's potential for positive returns in 2014.

Why did the price of silver in 2013 fall so much?
Unlike gold, which until 2013 had seen 12 consecutive winning years, silver had already suffered a major bear market before 2013 ever began. In early 2011, silver prices soared to nearly $50 per ounce,

Yet those gains proved short-lived, and by the end of 2011, the price of silver had dropped below where it had closed the previous year. 2012 produced a rebound of sorts, with many analysts pointing to the beginning of the Federal Reserve's third round of quantitative easing as potentially pushing silver back up to $50 and gold above $2,000. Yet silver prices never came close to regaining their former highs, and by the beginning of this year, opinions were varied about whether the price of silver in 2013 would climb or not. 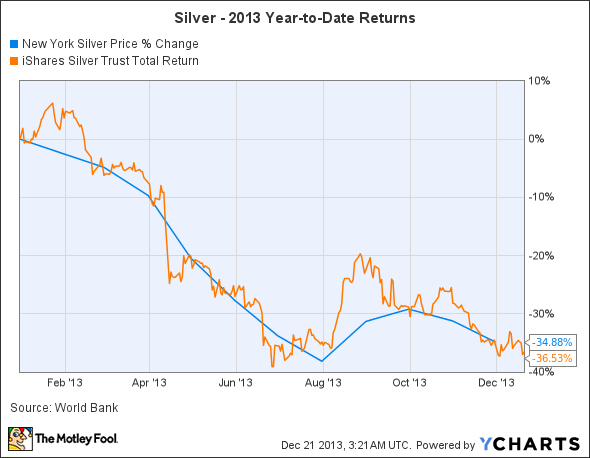 Silver started out the year on a stronger note than gold, outperforming the yellow metal as some investors believed that the cheaper precious metal was poised to catch up with gold's stronger performance since their 2011 highs. But in the end, silver's historical ties to gold prices reasserted themselves, and when gold prices plunged $200 per ounce in two days in April, silver fell even more on a percentage basis, plummeting $4 per ounce to go below $25 per ounce for the first time since 2010.

Silver does have industrial uses that gold doesn't, creating the potential for disparities in returns depending on economic conditions. But with so much of the bull market in both gold and silver having been dependent on the Federal Reserve's accommodative monetary policies, the sudden fear that the Fed would taper its extensive bond-buying under QE3 level.

The impact of weak silver
As investors saw with gold, the drop in the price of silver during 2013 led to a cascading negative effect throughout the industry. Silver miners found their margins crushed, leading to even more extensive drops for major producers Pan American Silver (PAAS 3.05%) and Hecla Mining (HL 8.33%). Dividends that had been based on higher silver prices gave way to dividend cuts as cash flow disappeared and miners chose instead to preserve cash for operational use. Falling prices made silver production less attractive, hitting silver-streaming giant Silver Wheaton (WPM 0.69%) hard as some of its anticipated silver production evaporated.

Interestingly, though, silver bullion investors haven't lost interest in the precious metal. The iShares Silver Trust (SLV 1.57%) had been a huge popular investing vehicle for silver, and even with the price drop, the trust still has roughly the same 10,000-ton amount of bullion in its vaults, backing up shares of the investment vehicle. That's in stark contrast to gold ETFs, which saw dramatic outflows during the year. Nevertheless, the value of investors' silver-ETF shares has dropped by a corresponding amount to the spot price, leaving investors suffering big losses in what was an incredibly strong year for stocks outside the mining industry.

What's ahead for silver?
Silver prices will face some of the same challenges in 2014 that they did this year, with the Fed's tapering on bond buying potentially putting more upward pressure on interest rates. Yet given its relatively low price, silver might well hold up better than gold if investors see the white metal as a cheaper way to play a potential bounce in precious metals. Nevertheless, silver investors will need to watch miners like Hecla and Pan American to see what decisions they make with their silver production, as well as keeping an eye on Silver Wheaton to see if it continues making deals in hopes of a rebound in the price of silver from 2013 and its horrible decline.

Are stocks a better buy than silver?
Millions of Americans who bet on silver and other precious metals hoped to avoid losses in the stock market. But those who've stayed out of stocks have missed out on huge gains and put their financial futures in jeopardy. In our brand-new special report, "Your Essential Guide to Start Investing Today," The Motley Fool's personal finance experts show you why investing is so important and what you need to do to get started. Click here to get your copy today -- it's absolutely free.