Last year, investors modeling the performance of the S&P 500 index enjoyed sizable returns with little volatility. So far in 2014, the S&P trails its prior-year performance by about 4.5%, and volatility has increased in the markets. Should you stick with the relative safety of blue-chip stocks? If you're working out your 2014 investment strategies and can accept a moderate amount of risk, consider bolstering your long-term returns through an index that loosely tracks the S&P 500's movement but in recent years has tended to outperform: the Russell 2000 Index.

Because of this small-cap composition, the Russell 2000 tends to exhibit greater volatility than the S&P 500. We can see this if we look at two proxies for these indices. The S&P 500 SPDR ETF (SPY -0.02%) sports a beta of 1. Beta is a measure of volatility, and the S&P 500 SPDR ETF is assigned that beta number because it mimics an index that, for all practical purposes, represents the overall market. All other stocks and exchange-traded funds are measured against this baseline number. A stock with a beta of 0.5 can be said to be about half as volatile as the overall market. A stock with a beta of 2 can be thought of as exhibiting about twice as much volatility (and theoretically, twice as much potential for return) as the overall market. 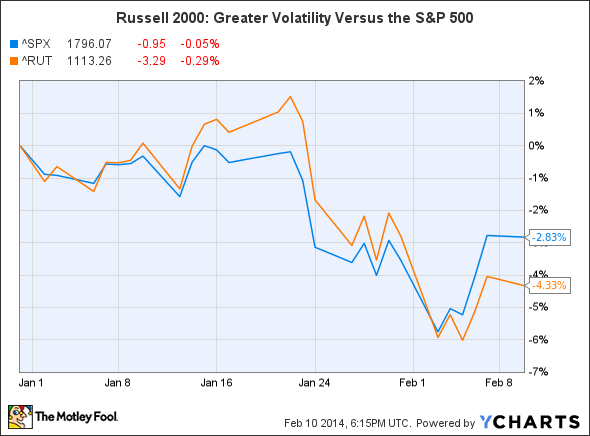 If you bought the iShares Russell 2000 ETF on the first trading day of the year, you'd own a loss that was one and a half times that of the S&P 500 SPDR ETF after the first week of February. That's the difference between theory and practice! However, weakness turns to resilience for the iShares Russell 2000 ETF when the market regains ground. Here are the same two indices year to date as of the close of trading last week: 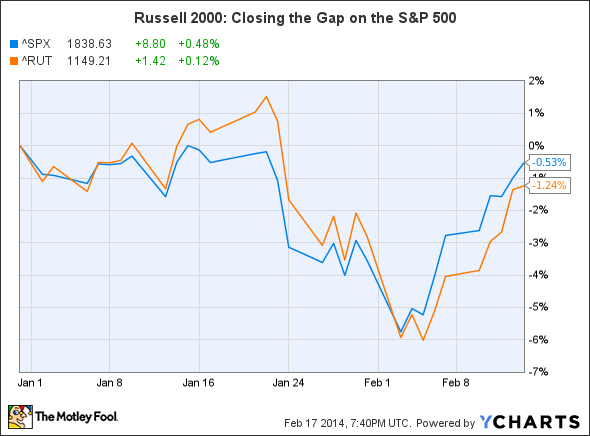 Broad-based indices tend to move in a related, but not lockstep, fashion. As we stretch the time frame from a few weeks to a one-year chart, we can see that the Russell 2000 follows the same path as the S&P 500, albeit with a slightly higher trend line: 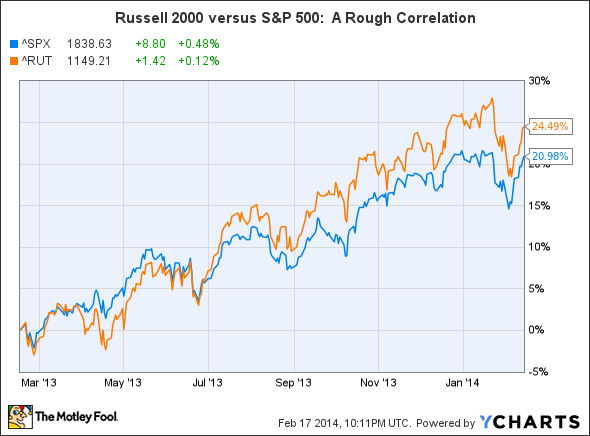 The Russell 2000 returned about 3.5 percentage points more than the S&P 500 over the last 12 months. It also outclassed its larger composite peer going back five years by a significant 34%. That impressive percentage spread holds up over a 10-year period as well: 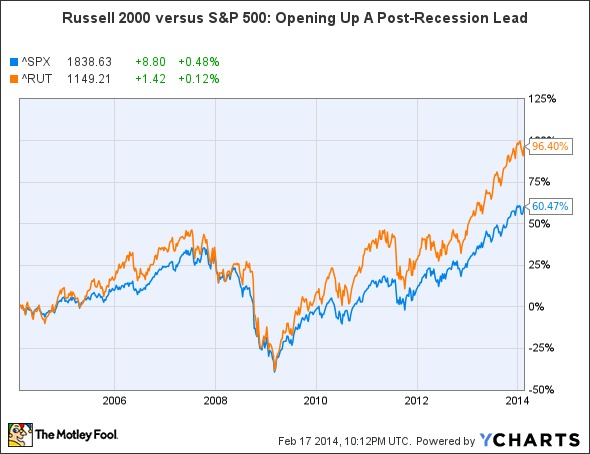 This is not to imply that the Russell 2000 has always outperformed the S&P 500. In fact, in the late 1990s to early 2000s, the S&P 500 consistently posted better performance numbers than the Russell 2000. And we may be headed into a brief period of Russell 2000 weakness. According to Goldman Sachs portfolio strategists, aggregate earnings-per-share growth for the Russell 2000 is projected to hit 23% in 2014, versus just 8% for the S&P 500.

However, Goldman analysts and others have also noted that price-to-earnings multiples for Russell 2000 stocks are fairly steep at the moment, relative to both their historical averages and S&P 500 trading multiples.

Choppy markets create gain potential
While there are no guarantees that the Russell 2000 will track ahead of the S&P 500 over the next few years, small-cap stocks have traditionally exhibited higher earnings growth potential than their bulkier cousins. This edge seems set to continue, especially as many large-cap companies have employed conservative fiscal policies recently, returning significant amounts of cash to shareholders in lieu of investing in growth. According to FactSet Research Systems, as of the third quarter of 2013, the trailing 12-month total of S&P 500 company share repurchases stood at $448.1 billion, which was the highest level of share buybacks since the financial crisis -- you have to go all the way back to the second quarter of 2008 to find a higher trailing 12-month total.

Small-cap companies, by contrast, tend to reinvest excess cash flow into their operations, rather than return the cash to shareholders via hefty dividends and share buybacks. For growth-oriented stock investors, this in itself provides an all-weather rationale to buy shares in smaller companies. However, should the market continue to fluctuate for the rest of 2014 as it has in the first few weeks, opportunistic investors of all stripes should be able to find entry points for a quite decent long-term trade using the iShares Russell 2000 ETF.

The Best Small-Cap Mutual Funds to Buy in 2020

Brexit: How It's Affecting Each Sector in Your Portfolio
356%