Please ensure Javascript is enabled for purposes of website accessibility
Free Article Join Over 1 Million Premium Members And Get More In-Depth Stock Guidance and Research
By Ryan Downie - Dec 30, 2020 at 11:02AM

ETF investors should take a look.

Many investors love index funds because they provide simple, low-cost diversified exposure to the stock market. However, picking one has become less simple as the number of indexes has grown, with more niche offerings differentiated by factors such as sector, company size, and geography.

The S&P 500, which is the most popular benchmark for the total market, had a wild year. Following its major correction in February and March, a six-month bull market pushed the index back to all-time highs, but its performance has been volatile since September. As of Christmas, the S&P had climbed 1.22% in December.

If you're looking for ETFs that offer you opportunities to outperform the S&P 500, consider these five popular index funds, which are beating it in December. 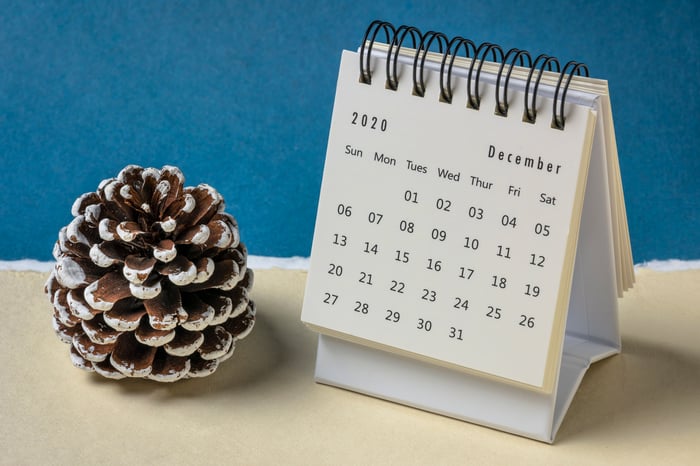 The Russell 2000 Index is composed of approximately the 1,000th through 3,000th largest public U.S. companies by market cap. These small-cap stocks are often more volatile and less liquid than their large-cap counterparts, and they more frequently suffer from issues such as customer concentration or inferior governance. Despite this, some will eventually grow into large caps, and their ability to multiply in size offers investors more upside potential than the established industry giants.

The Russell 2000 lagged the S&P 500 for most of this year after falling more steeply in Q1, but it has jumped ahead year to date on the back of strong performances in November and December. The iShares Russell 2000 Index ( IWM 2.01% ) is the most popular ETF tracking it, and it outpaced the market, producing a return of 9.27% for the month as of Dec. 28. This index fund has excellent liquidity with an average daily trading volume of more than $4 billion, and its 0.20% expense ratio is relatively low. 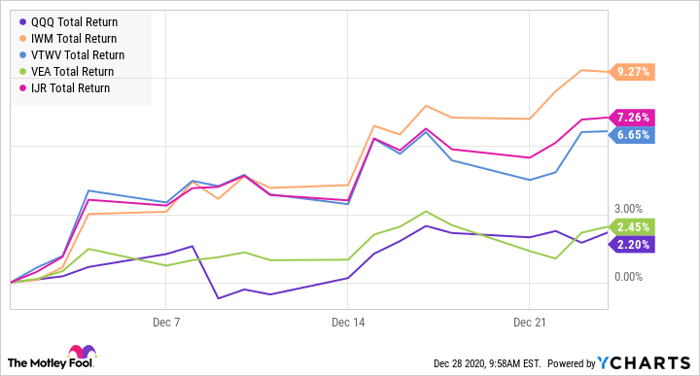 The Vanguard Russell 2000 Value ETF ( VTWV 2.26% ) and the iShares Core S&P Small-Cap ETF ( IJR 2.39% ) are small-cap index funds with slightly different approaches. The Vanguard fund holds only those Russell 2000 stocks that have sufficiently low price-to-book ratios, and it has returned 6.65% in December. Meanwhile, the iShares fund tracks the S&P SmallCap 600 Index -- its holdings are narrower, but have significant overlap with the Russell 2000, and it has returned 7.26% so far in December. Both are liquid and reputable, but the iShares fund's size and methodology give it an edge, as do its lower expense ratio and lower bid-ask spread.

Global developed markets are up

The coronavirus pandemic has been a drag on business activity in almost every country, and foreign stocks have not been spared the pain. The Vanguard FTSE Developed Markets ETF ( VEA 0.96% ) tracks an index of approximately 4,000 companies of all sizes in international markets. Nearly a quarter of its allocation is to Japanese equities, and it has significant exposure to the U.K., Canada, Switzerland, France, and Germany.

Stock markets in other developed nations have largely lagged the U.S. market through most of this year, but they've outpaced the S&P in December. The fund has returned 2.45%, nearly doubling the growth of U.S. stocks in the month. Investors in this ETF will appreciate its extremely low 0.05% expense ratio, its 2.07% distribution yield, its low bid-ask spread, and its great liquidity with $350 million of average daily trading volume.

The NASDAQ is heating up again

Tech stocks, which make up nearly 65% of the NASDAQ 100 Index, led the bull market through most of 2020. However, ongoing economic uncertainty and investors' concerns about lofty valuations sparked a modest sell-off in September, and the broader market outpaced the Nasdaq for about three months as defensive sectors like utilities gained traction.

Opinions appeared to swing back in favor of tech stocks in December, perhaps due to the conclusion of the 2020 election season and optimism about coronavirus vaccines. The Invesco QQQ Trust ( QQQ 0.80% ), which tracks the NASDAQ 100, is up 2.2% so far in December. That's a decent return above the market for a single month, but it is even more noteworthy given the 30 percentage point outperformance the ETF has delivered for the full year. These gains have more than justified its 0.2% expense ratio, and investors will love the extreme liquidity from its more than $8 billion in daily trading volume.

3 ETFs That Could Triple the Average $3,061 Tax Refund