Depending on whom you ask, gold is either a must-have investment or a terrible idea. The reality is, there are both good and bad reasons to invest in gold. There are also a number of ways to do it. Frankly, owning gold directly isn't practical for most people, and trading the commodity isn't always simple. One popular way to invest in gold is by using gold miners as a proxy, because their stock prices tend to move in tandem with the price of gold: 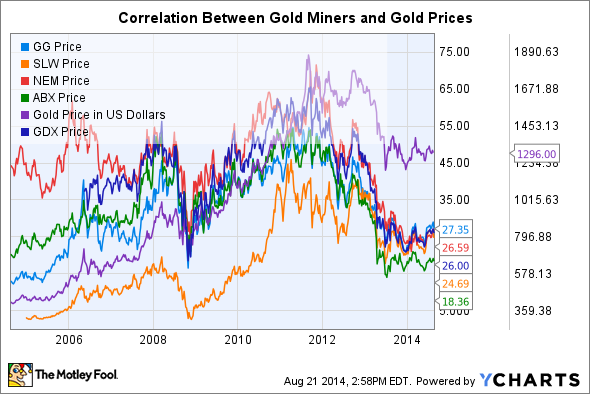 Gold mining is a hard, dirty, and expensive business, and fluctuations in the price of the commodity can swing a company from profits to losses literally overnight, making it difficult to know which miner to invest in. However, the Market Vectors Gold Miners ETF (NYSEMKT:GDX) is one way to get exposure to gold without having to buy the metal itself or figure out which gold miner to invest in.

1. Commodity exposure as part of your risk mitigation strategy
The thing about gold that makes it different from many other commodities is how much its demand can be driven by speculation about things outside of the actual demand for gold. Industrial and commercial demand is only one of many factors that affect the price of gold. The price of gold increased almost 600% from 2001 to 2011, largely on speculation of currency collapse -- not increasing demand for gold by industries or consumers: 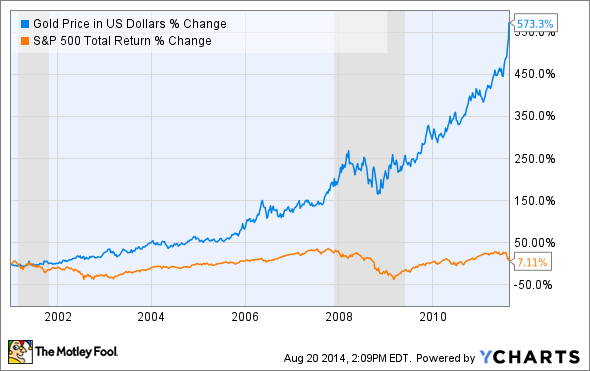 Since the peak in August 2011, gold has fallen 31%, while the stock market has rebounded strongly: 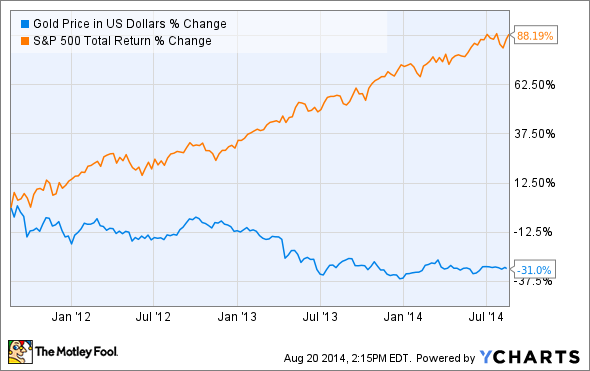 However, like bonds, investing in gold can be a way to mitigate the effects of a sour stock market, which often corresponds to poor economic conditions that send investors looking to gold for safety.

2. Broad exposure to the largest gold-producers
The Market Vectors Gold Miners ETF holds some 40 different stocks, giving broad exposure to gold miners. Because the fund is weighted by market capitalization, the largest companies make up the majority of the fund. More than 40% of the fund is allocated to four companies: Goldcorp (NYSE:GG), Barrick Gold (NYSE:ABX), Newmont Mining (NYSE:NEM), and Silver Wheaton (NYSE:WPM).

The benefit for most retail investors is that it simplifies the process gaining exposure to gold. If, for example, one wanted to limit exposure to 5% of their portfolio, it would take a lot of time and effort to determine which two or three companies offer the most upside and the least risk. And if you're managing a small portfolio, brokerage fees and stock prices could make it doubly difficult to diversify into enough gold miners to make it worth the effort.

This ETF takes that difficulty out of the equation, with risk spread across multiple companies and almost all of the upside tied to the performance of gold prices.

3. The current macroeconomic environment could be a positive for gold investments
For the past few years, the stock market has been on one of the best bull runs in decades, even as the economy has been slow to rebound in terms of job creation and personal income levels. There's evidence that the stock market's strength has been partly driven by historically low interest rates and the Federal Reserve's economic stimulus.

As the Fed begins both reducing its economic stimulus and raising interest rates, some have speculated that this could drive income investors out of stocks and back into bonds as yields return to historical levels during the next several years. This potential softness in the stock market could reignite demand for gold and send its price back up. The Market Vectors Gold Miners ETF is a simple way to gain exposure to this potential trend.

Final thoughts: Gold is a hedge, not a strategy in and of itself
I have to confess: I'm not a huge fan of gold investing as a primary means to grow wealth. The reality is that its price is driven too much by speculation of macroeconomic possibilities and not enough by the real value of gold itself. This makes any efforts to model its value, or its potential returns, essentially impossible.

However, using gold as a hedge against currency devaluation or a potential macroeconomic downturn isn't an unreasonable use of a small part of one's portfolio. If you want to make gold part of your investing strategy, the Market Vector Gold Miners ETF could be the best way to do it.