American investors deal with currency risk in their portfolios all the time. Even if you limit your portfolio to U.S. stocks, many of those companies likely have operations overseas, and their financial results can vary dramatically depending on the relationship between the U.S. dollar and foreign currencies. However, currency ETFs give investors a way to manage that risk, offering a direct way to profit when foreign currencies rise in value compared to the dollar.

Currency ETFs have been around for more than a decade now, and they have dramatically changed the way many people participate in the foreign exchange markets. Previously, those who wanted to trade in forex had limited options. They could buy foreign currency directly from certain banks and financial institutions, typically with high fees and without the opportunity to earn interest on their foreign cash. Alternatively, one could open a futures account and trade in forex futures contracts, but in that market, highly sophisticated professional investors lay in wait to pounce on forex novices. Moreover, the huge size of futures contracts made forex a dangerous place for those of modest means.

The initial idea behind currency ETFs was to make every share of a fund equal to a fixed amount of foreign currency. For instance, with the CurrencyShares ETFs listed above, each share started out being worth a round number of foreign currency units, such as 100 euro, 10,000 yen, or C$100. When short-term interest rates were high, the expenses of the fund were paid from the interest that the cash generated, leaving the rest to get distributed as dividends.

However, when interest rates fell -- or even went negative in places like Europe -- the income from ETF assets was insufficient to pay the expenses of the fund. Therefore, each fund paid itself from the principal assets, reducing the original round numbers to where they stand today. 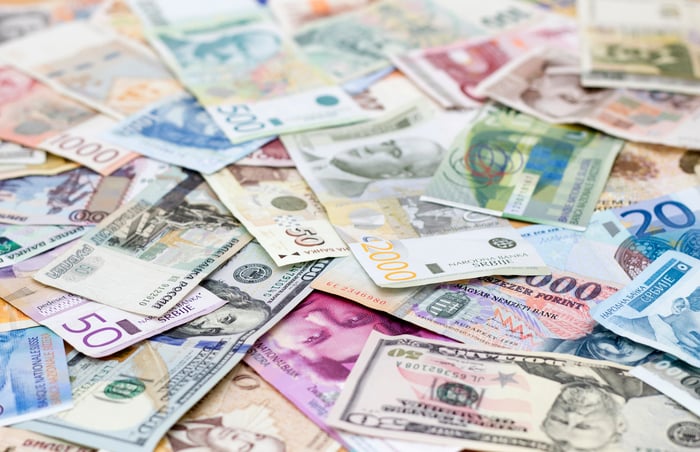 Not all currency ETFs merely hold foreign currency. For instance, the WisdomTree Brazilian Real ETF owns currency forward contracts, allowing it to hold U.S. cash as its primary asset but to keep exposure to movements in the Brazilian currency. Because of the way forward contracts incorporate interest rate differentials, the exchange rates under forwards vary. Currently, the fund has July forwards with rates of about 3.18 reais  to the dollar, while August forward contracts have rates closer to 3.26 reais.

Do currency ETFs make sense for your portfolio?

Looking at recent returns from currency ETFs, you might wonder why anyone would hold them. However, the U.S. dollar has been particularly strong over the past five years, and many investors believe that the strong-dollar trend might be reversing itself. If that's the case, then using currency ETFs could potentially let you benefit from a weakening dollar in the future.

Many market participants see foreign exchange as being speculative and a risky place for ordinary investors. There's some validity to that view, but for those seeking ways to protect themselves if the dollar loses ground, buying shares of currency ETFs can be the simplest way to hedge their bets and take advantage of rising forex values if and when they come.