Everything you need to know about this year's state of the economic union. 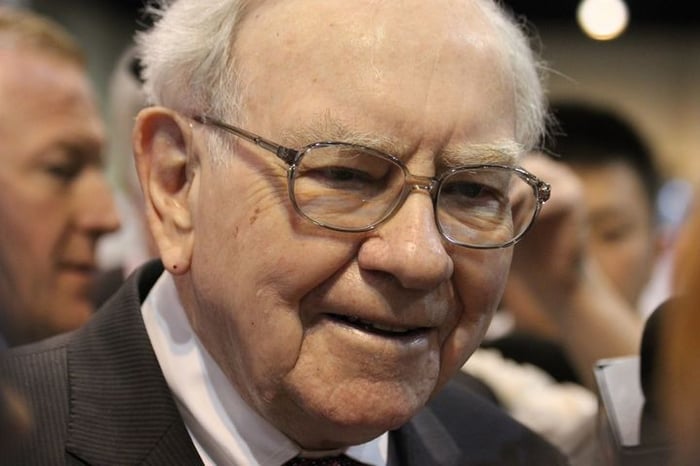 2. His Burlington Northern deal is making it rain
"It now appears that owning this railroad will increase Berkshire's 'normal' earning power by nearly 40% pre-tax and by well over 30% after-tax," Buffett writes. It's a contribution that's "working out even better than I expected."

Burlington earned $2.5 billion in 2010, up from $1.7 billion the year before. Berkshire bought the whole company in a 2009 deal that valued the company at $44 billion.

Buffett is "enthusiastic about BNSF's future because railroads have major cost and environmental advantages over trucking, their main competitor." Measured in tons of freight carried per gallon of diesel, BNSF's rails are three times as efficient as trucks. That advantage becomes more valuable as the price of oil rises -- and it has lately.

3. Insurance float is booming
In the insurance business, you collect money up front and pay out claims later. The money held in the meantime is called "float," and it can be invested for your benefit.

Berkshire's insurance managers have done such a phenomenal job pricing policies that insurance claims and expenses have been covered by premiums alone, without tapping into investment income, for eight consecutive years -- almost unheard of in the industry. That makes its float like a $66 billion interest-free loan. Better than that, actually. Shareholders "benefit just as we would if some party deposited $66 billion with us, paid us a fee for holding its money and then let us invest its funds for our own benefit."

4. He expects the Goldman and GE investments to end this year
Berkshire invested $8 billion into Goldman Sachs (NYSE: GS) and GE (NYSE: GE) in the form of preferred stock during the height of the financial crisis at sweet terms -- 10% dividend, plus warrants.

That party's almost over. GE can redeem its preferred shares in October and "has stated its intention to do so." Goldman has to get permission from the Federal Reserve, but Buffett thinks that'll happen soon.

Both have to pay a 10% premium to redeem the investments, which will earn Berkshire about $800 million. Even so, hold the applause. Those dividends were heaven. "Our earning power will be significantly reduced" post-redemption, Buffett writes. "That's the bad news."

The good news? The redemptions will boost Berkshire's cash hoard. And not a moment too soon ...

5. He's hungry for more
Buffett's last elephant acquisition, and his biggest ever, was Burlington Northern. He needs these megadeals to make a dent in Berkshire's massive portfolio. He's now ready for more. "We're prepared. Our elephant gun has been reloaded, and my trigger finger is itchy."

Berkshire held $38 billion in cash at the end of 2010, and that sum will surge this year from earnings and the retirement of the Goldman and GE investments. Buffett said he likes to hold $10 billion to $20 billion in cash in reserves, so there'll be enough ammo in the near future to do a deal in the $20 billion to $30 billion range. My guess: Berkshire buys something huge in China, another U.S. utility company, or another conglomerate like Marmon Holdings. Maybe a new suit.

6. He's bullish on housing
"A housing recovery will probably begin within a year or so. In any event, it is certain to occur at some point," Buffett wrote.

While not mentioned in the letter, he's previously explained his rationale for an impending housing rebound: More than a million households are formed every year, yet current housing starts average less than half that amount. Demand is catching up with supply. Simple.

Another housing story: "Home ownership makes sense for most Americans, particularly at today's lower prices and bargain interest rates," Buffett wrote. "All things considered, the third best investment I ever made was the purchase of my home, though I would have made far more money had I instead rented and used the purchase money to buy stocks. (The two best investments were wedding rings.) For the $31,500 I paid for our house, my family and I gained 52 years of terrific memories with more to come."

He follows with a story about the power of dividends. Berkshire now makes $376 million in dividends from Coca-Cola (NYSE: KO) annually, recouping its original investment every 3.5 years. Within 10 years, "I would expect that $376 million to double," he wrote. "Time is the friend of the wonderful business."

8. He wants you to ignore net income
"Operating earnings, despite having some shortcomings, are in general a reasonable guide as to how our businesses are doing. Ignore our net income figure, however. Regulations require that we report it to you. But if you find reporters focusing on it, that will speak more to their performance than ours. Both realized and unrealized gains and losses are fully reflected in the calculation of our book value. Pay attention to the changes in that metric and to the course of our operating earnings, and you will be on the right track."

How do these metrics look today? As of Dec. 31, Berkshire's price-to-book value is 1.34, versus a 25-year average of 1.63. Operating earnings have compounded at 11.8% annually over the past decade. Connect those dots yourself.

9. Derivatives are doing fine
Years ago, Buffett wrote long-term put options on various global stock indexes. As markets crashed in 2008, many worried the contracts would cost Berkshire tens of billions of dollars when they came due between 2018 and 2026.

That's hardly a danger anymore. Three things have turned the story around: Markets rebounded, Berkshire renegotiated the terms of the contracts, and counterparties canceled eight of the contracts themselves. If markets remain at today's prices between 2018 and 2026, Berkshire will owe $3.8 billion after receiving $4.2 billion in premiums -- still a good profit. Buffett likes the odds. You should, too.

10. He's as miserly as ever
"At Berkshire's 'World Headquarters' our annual rent is $270,212. Moreover, the home-office investment in furniture, art, Coke dispenser, lunch room, high-tech equipment -- you name it -- totals $301,363. As long as Charlie and I treat your money as if it were our own, Berkshire's managers are likely to be careful with it as well."

Contrast this to ex- Merrill Lynch CEO John Thain, who spent $1.22 million furnishing his personal office in a year Merrill would have gone bankrupt had it not been bought by Bank of America. Watch the pennies, and the dollars take care of themselves.

Want to add Berkshire Hathaway to your watchlist? Click here and don't look back.

What Businesses Can Learn From the Case of Ryan Braun
420%