Fourteen months ago, I looked at the hypothesis that the Fed was buying stocks to prop up the market, ultimately concluding that this was highly improbable. As we near the two-year anniversary of an extraordinary bull market, the evidence suggests there was no need whatsoever for the Fed to buy stocks itself. Instead, it served up a potent cocktail of cheap money that loosened investors' inhibitions, enabling them to bid prices up to immodest levels. But be prepared for a hangover once the Fed whips the punch bowl away!

A striking correlation
As Societe Generale's contrarian strategist Albert Edwards notes in his latest report, equities have displayed a remarkable degree of correlation with the size of the Fed's balance sheet since March 2009. The following graph, much like on in Edwards' report, displays the Federal Reserve System's total assets (blue line) against the S&P 500 (red line): 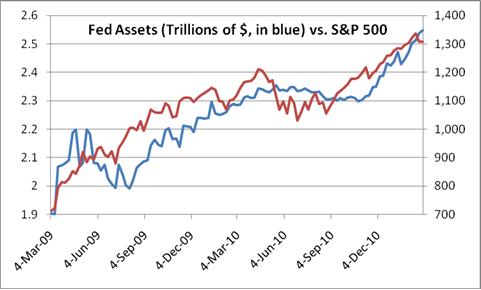 While the Fed has been busy hoovering up Treasury securities, taking its balance sheet from $1.9 trillion to more than $2.5 trillion, stock prices have tracked those changes closely. In isolation, it would be small-f foolish to draw any conclusions from that coupling. By mining mountains of data, it's always possible to find two variables that are highly correlated, even though those correlations are completely meaningless.

No mere coincidence
This situation is different, however, because we can stipulate a logical economic relationship between total Fed assets and the level of the stock market before calculating a single statistic. We know that as the Fed purchases risk-free Treasury bonds as part of quantitative easing (QE), this lowers their yield and makes risky assets (including stocks) relatively more attractive. Lower risk-free rates encourage investors to take on risk to "reach for yield"; the willingness to bear more risk translates into a willingness to pay more for stocks.

The link between quantitative easing (aka money-printing) and the stock market is hardly a secret. Fed Chairman Ben Bernanke has made it clear that lifting stock prices was one of the objectives of QE. In his November op-ed in the Washington Post, he wrote that "[Quantitative easing] looks to be effective again. Stock prices rose and long-term interest rates fell when investors began to anticipate this additional action... higher stock prices will boost consumer wealth and help increase confidence, which can also spur spending."

The gravity of quantitative easing
That's all well and good on the way up, but, at some point, the Fed will need to shrink its balance sheet to reverse an increase that is without precedent in its history. What happens to stocks then? Since January 1918 (roughly four years after the creation of the Fed), there has only been a single period of sustained decreases in the monetary base, from September 1920 through January 1922.

The following graph shows the monetary base (blue line) along with the Dow Jones Industrial Average (red line) during that period: From start to finish, the Dow Jones Industrial Average fell just 5.4%, but the peak-to-trough decline was an eye-watering 29%! If that were to occur today, many investors experiencing a near one-third loss in the value of their portfolio probably wouldn't have the fortitude to ride it out, particularly after the ups and downs they've already suffered over the last several years.

Financials: A sector exposed
Which companies are most vulnerable to the end of the Fed's largesse? Financials are at Ground Zero. Banks have been riding an extraordinary gravy train, borrowing costless short-term funds and lending them out or investing them in longer-term Treasuries. That's one of the reasons I like the basket of the four largest commercial banks: JPMorgan Chase , Citigroup , Bank of America and Wells Fargo .

Nevertheless, their inventories of Treasury bonds are vulnerable to a rise in long-term rates (as bond yields go up, bond prices go down). In addition, as the yield curve flattens out, the spread banks earn on the funds they loan out diminishes, reducing lending profits. Under that scenario, insurance companies such as MetLife or AIG , which are typically among the largest bond investors, would suffer significant mark-to-market losses.

Stock investors: It's high time to be discriminating!
The current environment is a veritable minefield of risks, not least of which is the imminent end of the Fed's extraordinary stimulative measures. Regardless of the sector, stock investors should be extremely discriminating with regard to the stocks they are willing to own right now. The confidence that can only come from being focused on value and margin of safety will be vital if we experience a correction resembling the one of 1920-1921.

To track the basket of top banks, click on JPMorgan Chase, Bank of America, Wells Fargo and Citigroup to add them to your watchlist, or start a new watchlist and add any company you want. You'll get valuable updates and immediate access to a new special report, "Six Stocks to Watch from David and Tom Gardner." Click here to get started.