Shares of Altria Group hit a 52-week high today. Let's look at how the company got here and see whether clear skies are in the forecast.

How it got here
Altria has been slowly inching toward a new high thanks in part to cost-cutting measures the company implemented last year and a steadily increasing dividend.

Altria has found the sledding rough lately, with its premium tobacco brand, Marlboro, slowly bleeding market share to discount cigarette brands from rivals Lorillard and Vector Group . Responding to weakening cigarette demand, the company announced plans last year to lay off 15% of its workforce to cut expenses. But keep in mind that Altria isn't a charity case and, despite the stagnant sales, has remained healthfully profitable and more than capable of paying out an annual dividend of $1.64, which translates into a 5.5% yield.

How it stacks up
Let's see how Altria stacks up next to its peers. 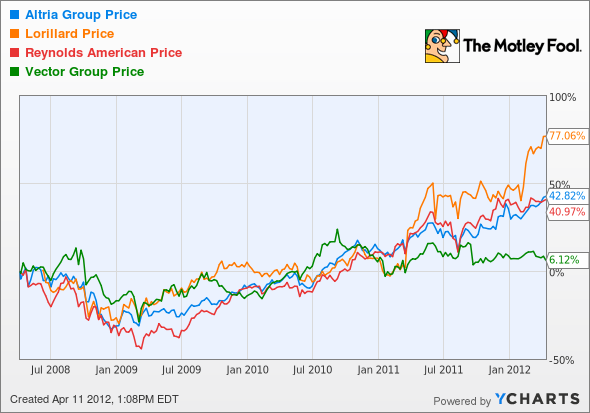 The tobacco sector remains a safe-haven investment for income-seekers.

On a forward earnings basis, these companies appear very similar, but there are easy lines to draw in the sand between them. Vector, for instance, has the smallest cash position of the group, which leaves it very much exposed to potential legal challenges -- a common occurrence in the tobacco sector. Altria and Reynolds American, the two U.S.-based companies that are laying off workers, boast considerable debt loads -- especially Altria, with 4 times as much debt as cash on hand. Not surprisingly, Lorillard, which has seen the strongest cigarette volume and market-share growth in the tobacco sector, offers the best cash-to-debt mix.

What's next
Now for the real question: What's next for Altria? That question really depends on whether it can find a way to grow its premium Marlboro brand again in the midst of an aggressive anti-smoking campaign by the Center for Disease Prevention and Control and a push by the FDA for tobacco companies to come clean about the chemical make-up of their cigarettes.

Our very own CAPS community gives the company a five-star rating (the highest), with an overwhelming 96% of members expecting it to outperform. Believe it or not, I am one of those dissenting 4% who maintains a CAPScall of underperform on Altria. The reason I remain bearish has to do with the stringent laws and anti-smoking movements in the United States, which are making it increasingly difficult for U.S.-based tobacco companies to grow. I think Altria's layoff's and a dip in cigarette volume are a testament to these actions in effect. I much prefer looking abroad to a company like Philip Morris International , which has its products spread out around the world and doesn't have nearly the same legal risk built in as Altria.

Craving more input on Altria Group? Start by adding it to your free and personalized Watchlist. It's a totally free service offered by The Motley Fool to keep you current on the news and events you care about most.