The Motley Fool has been making successful stock picks for many years, but we don't always agree on what a great stock looks like. That's what makes us "motley," and it's one of our core values. We can disagree respectfully, and we often do. Investors do better when they share their knowledge.

In that spirit, we three Fools have banded together to find the market's best stocks, which we'll rate on The Motley Fool's CAPS system as outperformers or underperformers. We'll be accountable for every pick based on the sum of our knowledge and the balance of our decisions. Today, we'll be discussing U.S. tobacco giant Altria Group .

Altria by the numbers
Before we dive headfirst into discussing the United States' largest tobacco company by market share, let's take a moment to better understand Altria.

Sean's take
Whether or not you have a personal vendetta against the tobacco industry, it's undeniable that tobacco companies generate an amazing amount of profit from the sale of its vice. But it's my opinion that Altria is the worst possible choice in a sector that's becoming increasingly competitive and legally constraining.

For starters, both the Centers for Disease Prevention and Control and the FDA have clamped down on the tobacco industry. The CDC recently launched a three-month, $54 million graphic television advertising campaign to coerce people to quit, while the FDA ruled in favor of making tobacco companies hand over data regarding the content of 20 chemicals found in their cigarettes by next year.

Then there's the competition itself. Lorillard and its premium Maverick brand have been taking market share at a relatively steady pace from Altria. While Lorillard grows, Altria and Reynolds American have taken to shrinking the size of their workforce in response to stagnant sales. Altria and Reynolds American plan to lay off 15% and 10% of their workers, respectively, over the next few years.

With Marlboro's market share slipping slightly and discount tobacco companies like Vector Group and Lorillard slithering in to steal that market share, I find it unsurprising that Altria is shedding workers. I continue to prefer Philip Morris International because of its wide-stretching international exposure and significantly reduced legal risk, but if I was forced to choose a U.S.-based tobacco company, Altria would probably be dead last on my list. I'll pass here.

Travis' take
Altria is in an interesting strategic position containing both strong positive and negative characteristics. On the plus side, who wouldn't want to buy a company whose products are actually addictive? It's as if every customer who starts buying its product is an annuity for life. And despite the negative commercials, I don't see smoking going away anytime soon. It may not be the "cool" thing it once was, which will keep the company from growing significantly, but smoking is still sewn into the fabric of society in a way.

But I find it troubling that even the front page of Altria's website is chock-full of links meant to help customers stop using their products. Federal and local regulations also aren't making it any easier to be a smoker, and I don't see an explosion in people taking up smoking, no matter how popular Mad Men is. Plus, the company's core product is associated with fires, as well as cancer and other health problems.

I see Altria's stock as a pure dividend play, as I don't see the company growing significantly in the future because of a societal shift slowly away from smoking. With a yield of 5.2%, the stock is priced attractively, and the company has a long history of outperforming the market, so I will give this stock a thumbs-up right now.

Alex's take
While I don't agree with Sean that Altria is the worst possible choice in the tobacco sector, I do recognize that it faces more headwinds than more globally positioned tobacco companies. Is that enough to give it the dreaded thumbs-down? Not quite, and not yet.

Let's face it: Anti-tobacco crusades are nothing new. The U.S. tobacco industry was roiled by massive lawsuits in the '90s, buffeted by over-the-top anti-smoking ads for decades, and is now facing the dangerous demographic double-whammy of declining overall use and diminishing use among the young that would make up the next generation of long-term smokers. Has that stopped Altria? Not yet -- the company's maintained stable revenues and enviable margins since its big spinoff. The bigger question is whether those trends can continue, and if so, for how long.

Demographics are clearly not on Altria's side, but it's not as if the company is hurting for brand recognition -- Marlboro is as iconic as a red-and-white can of Coke. Being the top dog of a profitable -- if squeezed -- sin sector should be enough to keep its value as a high-yielder. But we don't want just yield; we also want market outperformance going forward. I think that Altria can provide that outperformance over the next year or two, on the condition that recent broad-based stock gains taper off. As a defensive stock with a high yield, Altria's well positioned to hold firm in a bear market.

There is a worry, though, that its valuation has grown beyond reasonable levels. As Morgan Housel pointed out earlier this year, Altria's stock is at its highest valuation since 1998. Despite enjoying less total growth over the past three years than Philip Morris, Altria's P/E has grown more than twice as much in the same time period: 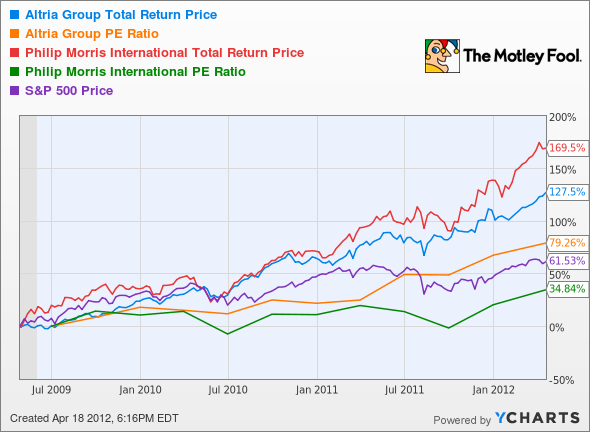 The stock's now well past levels it reached pre-crash and pre-spinoff. How much further will it grow? And more importantly, how much further can it grow? The company already has a payout ratio with barely any slack, which has been going up lately even as its international cousin has managed to keep more of its money without sacrificing yield: 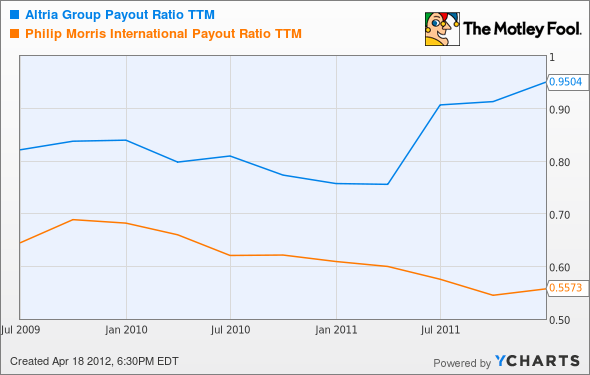 Much of the argument for the stock's outperformance seems to rely on its being a defensive holding in a volatile market with major downside potential. That's not enough to earn my vote, but I don't see a big dive in Altria's future, either. I'll have to call this one a "market perform" for 2012.

The final call
That, folks, is what we refer to as a three-way split. With Travis bullish, Alex impartial, and me decidedly bearish, we have ourselves a stalemate. Taking into account Altria's impeccable dividend and iconic Marlboro brand, in addition to more prevalent anti-smoking campaigns and its recent lack of growth, we have collectively decided to add Altria to our watchlist in the exclusive Young Guns CAPS portfolio with the intent of adding it as an outperform if it were to hit our limit price of $25.70 -- the average of our three buy levels.

Altria may not offer the right mix of what we're looking for, but our analysts have identified three U.S. companies that are growing like wildfire in the emerging markets. Find out their identity for free.