I'm not shy about owning up to some odd superstitions I have. For more than a decade I refused to work on Tuesdays because I felt it brought me bad luck. I also put my jewelry on and take it off in a certain order each and every day. But are superstitions really worth paying attention to?

Try asking the shareholders who own stock in the 60 different publicly traded corporate sponsors of our Big Four sports programs in the United States: baseball, basketball, football, and hockey. According to CNN Money, which has been tracking the performance of these 60 publicly traded corporate sponsors over the past year, 37 of them -- or 62% of the total -- are down an average of 21%! That's horrendous, considering that the Dow has risen a modest 2.5% over the past year.

Is it really a corporate death knell to put your name on the side of a stadium? Maybe so.

Here are a few recent failures worth noting:

Chesapeake Energy
Chesapeake Energy
, noted sponsor of the Chesapeake Energy Arena, home of the Oklahoma City Thunder on the NBA, is dealing with a dual fallout. For one, natural-gas prices are near decade lows, and expected profits have turned into quarterly losses. Even worse, CEO Aubrey McClendon is on the hot seat for a potential conflict of interest with shareholders regarding his ownership stake in some of Chesapeake's wells. In addition, Mr. McClendon originated loans from three companies he owns and used his ownership stakes in Chesapeake's wells as collateral.

Any arena sponsored by an airline
You might be laughing, but it's true. American Airlines, sponsor for the home of the NBA's Miami Heat and the arena shared by the Dallas Mavericks (also of the NBA) and the NHL's Dallas Stars, flew into bankruptcy late last year, following years of just scraping by. That's right -- in addition to placing last year's order for $40 billion worth of additional planes over the next 20 years, it also decided to sponsor not one, but two arenas!

United Continental managed to hang onto its sponsorship of the United Center, home of the NBA's Chicago Bulls and NHL's Chicago Blackhawks, despite filing for bankruptcy protection (as United Air Lines, prior to the merger with Continental) in 2002. You can also add Toronto's Air Canada to this dubious list.

The "stadium curse"
It's also worth noting that this isn't a recent problem, either. The Internet bubble of a decade ago created a 19-month stretch, whereby nine of the 63 publicly traded corporate sponsors filed for bankruptcy. These flops included no-names like PSINet; fraud-plagued companies like Worldcom, Adelphia Communications, and Enron; and just plain bad business models like Trans World Airlines. If I didn't know any better, I'd say there's clear evidence that the so-called "Stadium Curse" does actually exist.

This "curse" is also prominent among companies that haven't gone bankrupt. 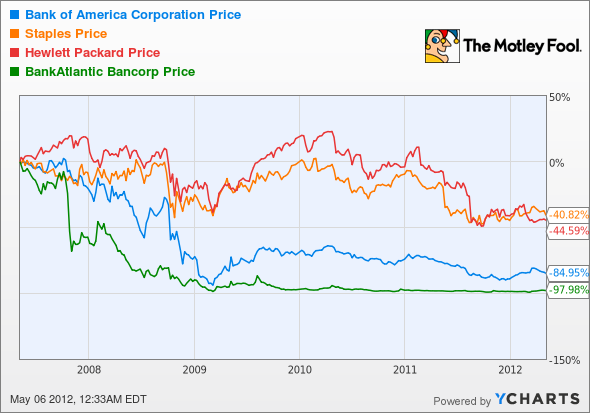 A personal holding of mine, Bank of America , sponsor of the Bank of America Center for the NFL's Carolina Panthers, has lost nearly 85% of its value over the past five years, in which it has dealt with a weak housing market and few growth opportunities.

Hewlett-Packard has owned naming rights to HP Pavilion, home of the NHL's San Jose Sharks, since it purchased Compaq. Unfortunately for shareholders, HP's inability to identify whether it's a hardware or software company has left its shares down almost 45% in the past five years.

But perhaps the creme de la creme of stadium-naming gaffes comes from the home of the NHL's Florida Panthers. The stadium's first naming rights went to National Car Rental, whose parent company, ANC, went bankrupt in 2001. Following it was Office Depot, which signed a 10-year deal to sponsor the arena in 2002. Not only did the deal collapse after only three years, but so did Office Depot's stock shortly thereafter. It has lost more than 80% of its value since it lost its naming rights. The current sponsor is BankAtlantic , a bank hanging on by a thread in its attempt to avoid bankruptcy due to a weak Florida real-estate market. Since its sponsorship deal in 2005, the stock has lost nearly all of its value.

Why sponsor?
With so few success stories and a mounting pile of failures, what would compel a company to sponsor an arena, and thus the teams that play in that arena? The way I see it, there are four main factors:

The cost to plaster a corporate name on an arena can vary wildly. Staples is paying $100 million over a 20-year period for the naming rights to the Staples Center in LA, whereas Qualcomm needed to provide only $18 million for naming rights to Qualcomm Stadium in San Diego for 20 years.

Take your message elsewhere
While the benefits of added logo exposure and product differentiation appear to be a smart bet, hubris has often gotten in the way of smart decision-making. I have to wonder how many more airlines and dying business models we'll see attempting to plaster their name on America's arenas? It's true that not every company sponsoring an arena has failed, but the rate of failure is far outpacing the success stories. My advice is to be very worried the next time a company whose stock you own decides it wants to put its name on the side of an arena. It may be the most obvious warning sign you'll ever get.

Another way you can avoid the stadium curse is by avoiding risky investments altogether. See why our team of analysts thinks these nine dividend stocks are rock-solid investments going forward. Click here for your free copy.