Shares of Power-One recently hit a 52-week low. Let's look at how it got here and whether clouds are ahead.

How it got here
The fall has been long and hard for Power-One, which has followed solar companies south throughout the year. Sales have stagnated as the solar market in Europe began to run into weaker demand, and earnings have suffered as a result.

The latest kick to the gut came last week when the company released a disappointing earnings report that saw earnings per share fall to $0.03 from $0.25 a year ago.

But Power-One isn't the only one struggling in this market. Competitors in the inverter market SatCon Technology and American Superconductor have seen their share prices plunge as well. The solar industry has been blasted as well as you can see by First Solar's price plummeting along with inverters. First Solar is one of the market leaders, but demand and pricing pressure have hurt it along with inverter manufacturers. 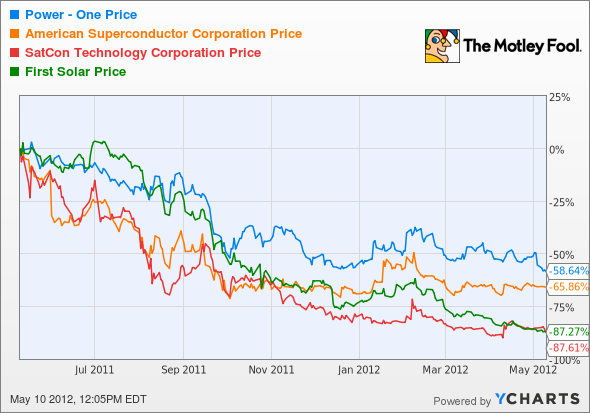 There has also been an emergence of competitors in the inverter market. I pointed to American Superconductor, who is trying to gain a foothold in the utility scale space, and Enphase came out of nowhere to be a major player as well. But Power-One is one of the few expecting to post a profit this year.

I would also point to Power-One's $205 million in cash and zero long-term debt as strengths for the company. With a $444 million market cap, that provides some nice downside protection.

What's next?
Right now the inverter market is crowded with competition just like the solar market, and I don't expect the trend to change anytime soon. So at the very least, there is a lot of uncertainty going forward. I also don't like the direction that earnings are headed and the fact that earnings estimates are falling after the recent earnings miss.

On the plus side, the company has a great balance sheet, and I do like the solar market's potential in the long term. Like with solar manufacturers, the trick will be picking the companies that come out alive over those that will be left for dead. I give Power-One as good a chance as any to emerge victorious, but I don't see enough differentiation or momentum in earnings to make a strong bet on the stock right now.

The CAPS community disagrees, giving the stock a four-star rating (out of five), with 612 players giving an outperform call versus only 39 underperform calls. Who is right? Leave your thoughts in the comments section below.

Interested in reading more about Power-One? Click here to add it to My Watchlist, and My Watchlist will find all of our Foolish analysis on this stock.