"How do you become a millionaire? Make a billion dollars and then buy an airline." -- Warren Buffett

In 1989, Warren Buffett, the chairman and CEO of Berkshire Hathaway, invested $358 million in convertible preferred shares of USAir Group, now US Airways . By 1994, the position had lost 75% of its value. Although Berkshire eventually made money on the investment -- big surprise! -- it nevertheless prompted Buffett to make the following statement:

If a capitalist had been present at Kitty Hawk back in the early 1900s, he should have shot Orville Wright. He would have saved his progeny money. But seriously, the airline business has been extraordinary. It has eaten up capital over the past century like almost no other business because people seem to keep coming back to it and putting fresh money in.

I have an 800 number now that I call if I get the urge to buy an airline stock. I call at 2 in the morning and I say: 'My name is Warren, and I'm an aeroholic.' And then they talk me down.

The truth about airline stocks
If there's any doubt about the wisdom of this advice, that should all be cleared up with the following chart, which tracks the performance of the Amex Airline Index, an index of major U.S. and overseas airlines. As you can see, an investment in this index in 1992 would have resulted in a 20% loss, compared to a nearly 200% gain on the S&P 500 over the same time period. 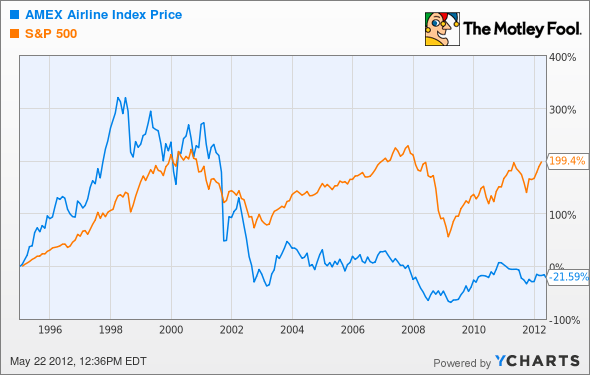 In terms of individual components, moreover, over the last five years, shares in United Continental , Southwest Airlines , and Delta have each declined over 38% in value; shares in U.S. Airways and JetBlue have declined by more than 60%; and American Airlines filed for bankruptcy at the end of last year. The only airline that appears to have paid off for investors is Alaska Air Group, which is up triple digits -- though, if history is any indication, that won't last much longer.

If you must scratch that airline itch
If you still can't fight the urge to invest in an airline company despite this evidence, then it's time to move up the margin chain to Boeing .

Unlike the commercial airline industry, there is significantly less competition in the manufacturing sphere, which resembles more of a duopoly than a completely open market. Without as much pressure on prices, Boeing has been able to record positive net income every year since 2007. And that's despite the economic downturn!

In addition, the manufacturing giant has significant exposure to, and opportunities in, the rapidly expanding emerging markets, particularly Asia. In terms of current exposure, the company gets only 18% of its revenue from the Asia Pacific region. But in terms of opportunities, the statistics are shocking.

According to Boeing's estimates:

To give you a rough comparison, traffic demand in North America is expected to only grow at an annual rate of only 2%, requiring a comparatively modest 7,530 new planes. And to add insult to injury, the majority of this increase is expected to come from routes between here and the economically dynamic regions in Central and South America.

If you've prefer to stay away from airlines
At the end of the day, of course, you could always just skip the airline industry altogether and go for a stock with an exceptional past, present, and future: "The Motley Fool's Top Stock for 2012." Over the last five years, this stock has returned over 260%, and given its massive exposure to Latin America, it very well could go dramatically higher. To read our free report and learn the identity of this stock before the rest of the market catches on, click here now -- it's free.