Shares of Alexion Pharmaceuticals recently hit a 52-week high. Let's take a look at how it got there and see if clear skies are still in the forecast.

How it got here
The strength behind Alexion's recent results lay with the fact that its product development is targeted at rare diseases. Drugs for rare diseases often have little competition, or, in Alexion's case, no competition, and receive fast-track designation when being reviewed by the Food and Drug Administration since the drugs often hit a currently unmet medical need.

Alexion's only FDA-approved drug is Soliris, which is protected from competition through most of 2014. Soliris is used to treat paroxysmal nocturnal hemoglobinuria (PNH), a cause of anemia, and was recently approved in both the U.S. and European Union to treat atypical hemolytic uremic syndrome (aHUS). The drug has been well-accepted and Alexion has boosted its earnings forecast on multiple occasions over the past few years.

However, there are pitfalls that come with reliance on just one drug. Soliris' current product pipeline features expanding Soliris' use and Asfotase alfa, but nothing currently in phase 3 trials, giving the company little to fall back on if Soliris sales slump in its current indication. In short, Alexion is a one-trick pony that now commands an $18 billion market cap despite projections of just shy of $1.1 billion in Soliris sales this year.

How it stacks up
Let's see how Alexion stacks up to its peers. 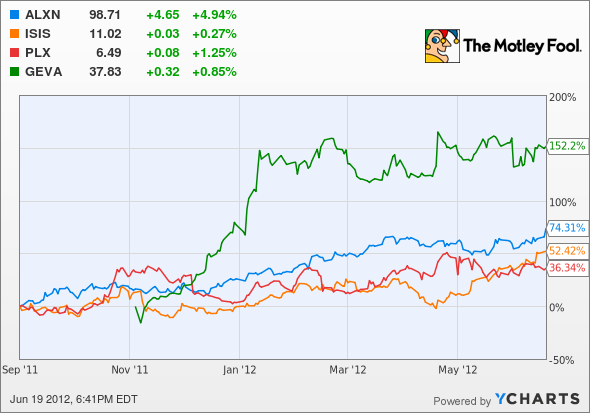 As you can see, rare disease-focused biotechs have been the darlings of Wall Street over the past nine months.

Normally here we would look at a fundamental comparison between Alexion and its peers, but since Alexion has no direct competitors to PNH or aHUS, we'll instead look at how reasonably it and other rare-disease-focused stocks are valued.

Isis Pharmaceuticals' lead drug candidate, Kynamro, aimed at treating homozygous familial hypocholesterolemia (don't you wish you'd become a doctor?) and developed in collaboration with Sanofi's wholly owned subsidiary Genzyme was recently submitted to the FDA for standard review. The submission triggered a $25 million milestone payment from Sanofi, but even more important, an approval could mean a large chunk of the $35 billion market for cholesterol-lowering drugs.

But not all rare-disease stocks are worth your time... or money. Protalix BioTherapeutics' lead drug, Elelyso, is targeted at treating Gaucher Disease, and although the drug was recently approved by the FDA, the stock has hardly moved. The reason is that Protalix has a long history of diluting shareholders with secondary offerings so shareholders are obviously skittish about management's ability to effectively launch a new drug.

Synageva could be the worst yet. Its midstage experimental treatment for early and late-onset lysosomal acid lipase deficiency, SBC-102, is only in midstage trials while the other four compounds in its pipeline are all preclinical in nature. Talk about a case of possible overvaluation!

If these peers have shown us anything, it's that rare-disease biotechs are commanding huge, and often undeserved, premiums.

What's next
Now for the $64,000 question: What's next for Alexion Pharmaceuticals? That question is going to depend on whether it can find other uses for Soliris, as well as use its operating cash flow to further enhance its pipeline beyond just one drug -- or using that one drug as a combination therapy.

Our very own CAPS community gives the company a three-star rating (out of five), with 81.9% of the members who rated it expecting it to outperform. Consider me among the minority as I made a CAPScall of underperform on Alexion back in late January and currently find myself down 28 points on that selection.

What I won't be doing is closing that pick anytime soon. Alexion's growth has astounded Wall Street thus far, but there is absolutely nothing to this company beyond Soliris! The recent addition of aHUS will boost sales, but it's a very rare disorder that won't provide the hyper-growth shareholders have become accustomed to. Unless Alexion decides to purchase its way to a diversified portfolio, $18 billion is a ludicrous price to pay for Soliris and I feel Alexion could have a long way to fall once competition arrives.

That said, Alexion Pharmaceuticals clearly has a drug that's changing lives. If you'd like the inside scoop on a stock our Motley Fool Rule Breakers team feels could offer the next revolutionary product, then click here for your free access to our latest report.

Craving more input on Alexion Pharmaceuticals? Start by adding it to your free and personalized watchlist. It's a free service from The Motley Fool to keep you up to date on the stocks you care about most.