We all know that Don Draper, the chain-smoking, heavy-drinking, philandering protagonist of the television series Mad Men, can sell anything, but can he steer you toward good investments?

Over the next few weeks, I'll analyze sectors and companies that Don Draper has created ads for and determine whether they are worthy additions to your portfolio. This article, the second in this series, focuses on a tasty company that you've seen in grocery stores, restaurants, and probably your own refrigerator.

Ketchup king
Don was able to land the H.J. Heinz account in the latest season, and, considering its strong brand name, I can see why this is an adverting agency's ideal client. Interbrand's latest report estimated Heinz's brand value at $7.6 billion, making it the 49th-most powerful brand on the planet.

Heinz is commonly associated with sauces and its eponymous ketchup, but these products only accounted for 45% of the company's total revenue in fiscal 2012. Meal packages and snacks, such as Bagel Bites, brought in 38.5% of sales, and nutrition and baby food, such as Plasmon, comprised 10.6% of revenue.

Despite a strong brand and product diversification, Heinz didn't have a great year. Total sales in fiscal 2012 were up 8.8% year over year, but higher selling, general, and administrative costs weighed down net income by 6.7% compared to fiscal 2011. A lot of factors were at work here, including marketing expenses, currency exchange rates, and higher fuel costs, so I'm taking this decline with a pinch of salt. I think there is still a lot of value in Heinz, and, in addition to its strong brand name, two main strengths make it a solid defensive stock for long-term investors.

New strategic recipe
First, the majority of Heinz's sales are from North America and Europe, both mature markets that are slowing down in the face of economic hardship. To offset this downward trend, the company has made savvy acquisitions in emerging markets that are starting to pay off.

In addition to growing internationally, Heinz is expanding its product line. One interesting example is a new vinegar food/cleaning product, which has a higher concentration of acetic acid and can be used for both household cleaning and cooking.

Heinz's focus on both geographic and product expansion are sure to drive the company's long-term growth.

Heinz meanz returnz
Second, Heinz is one of the most financially attractive companies in the packaged-food sector:

Heinz has an edge on competitors Kraft and ConAgra Foods when it comes to P/E and profit margin. Its robust dividend has increased 35.5% over the last five years, and a payout ratio of 67% indicates that a good chunk of earnings can be used for future expansion. Heinz's dividend yield is higher than both Kraft's and Campbell's . ConAgra Foods, which manufactures the Hunt's ketchup brand, has a slightly higher yield than Heinz, but has a significantly smaller profit margin and trades at a higher P/E.

Campbell Soup is also a strong company and has an attractive P/E and profit margin. However, Heinz's total price return, which takes into account both stock price increases and dividend payments, has been dominant in this industry over the last five years: 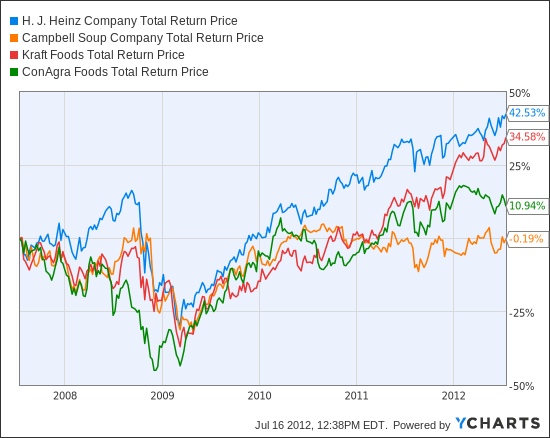 With an enduring brand name, strong growth strategy, new products, and solid returns, I'm as enthusiastic about Heinz as Don Draper is. For a few other ideas sporting similar traits, check out The Motley Fool's exclusive list of The 3 Dow Stocks Dividend Investors Need. Find out which companies our analysts think should be at the core of your portfolio by reading this special FREE report. Click here to claim your copy.