Shares of SunPower hit a 52-week low on Monday. Let's take a look at how it got there and see whether cloudy skies are still in the forecast.

How it got here
Get a paper bag, cut out one hole for your mouth, two small holes for your nostrils, but no holes for the eyes, because you're not going to want to look at any of the results the solar sector has offered investors lately.

OK, facetiousness aside, the solar sector is in a world of hurt. Rampant oversupply, falling panel and polysilicon prices, and a reduction in subsidies from Germany have made it practically impossible for solar companies to turn a profit. Many of these companies had invested heavily in expanding capacity and are finding those moves highly imprudent now that cash flows have turned rapidly and decisively negative. What's worse, China's government is spurring continued production by offering subsidies, further worsening global oversupply.

SunPower, however, is a bit of a mixed bag. Despite reporting losses and suffering from the same industry turndown, its vertically integrated business allows it to internalize and better control its costs, which, in turn, should allow it to reduce its cost per watt to compete against its Chinese rivals, Trina Solar and Suntech Power . As the Fool's solar expert, Travis Hoium, also pointed out in our roundtable discussion on SunPower in April, its margins are relatively stable while previous Wall Street darling First Solar is seeing margins fall like a rock as capacity sits idle and its higher costs eat into its new order totals.

How it stacks up
Let's see how SunPower stacks up next to its peers. 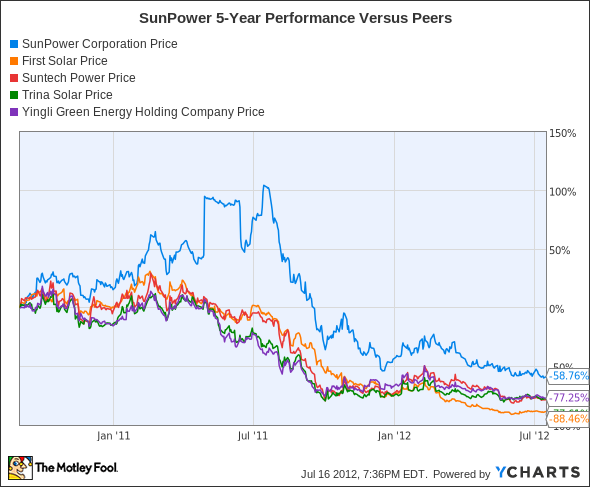 Cue the bagpipes. In spite of bankruptcies from Evergreen Solar, Energy Conversion Devices, and Solyndra, SunPower is still the best performer over the past five years with a loss of 59%! Not even China's cheap labor has been able to save Trina Solar or Yingli Green Energy .

I warned you to have that paper bag ready! Talk about an attack of the "not meaningfuls"! In layman's terms, this is just a nice way of saying there's a negative value there that doesn't compute. That means not a single one of these five solar module makers is both cash flow positive and expecting a profit in its next fiscal year -- not one!

If there is one major takeaway here, it's the solid financial backing First Solar and SunPower possess relative to their Chinese counterparts. First Solar's cash position is unrivaled, but SunPower, with the financial backing of Total, is far from  a charity case either. The real concerns are Yingli and Suntech, which are both well over 200% debt-to-equity. If China reduces its subsidies, these companies could find themselves in deep trouble with regard to meeting their debt obligations if panel prices don't rebound.

In short, the sector is cheap and further pricing pressure could make it cheaper.

What's next
Now for the $64,000 question: What's next for SunPower? That depends on whether its vertically integrated cost savings will allow it to compete against its currently cheaper Chinese rivals and whether solar panel prices stabilize.

Our very own CAPS community gives the company a two-star rating (out of five), with 89.8% of members who've rated it expecting it to outperform. Count me among the optimists with a CAPScall of outperform on SunPower; however, I think I need the bag now with an overall score of minus 61 on that selection.

Deeply negative score aside, I feel SunPower will be one of the survivors in a hugely oversupplied solar sector. Its panels are the most efficient in the world at turning sunlight into electricity, and it soon could offer one of the, if not the, lowest cost per watt in the sector. With the financial backing of Total and a long-term trend toward cleaner fuel sources, SunPower should be a winner.

SunPower may not exactly be the sunshine in investors' eyes at the moment, but there's plenty of buzz to go around from our analysts in our latest special report that discusses three stocks that will help you retire rich. Click here to get your copy of this free report and find out which stocks they're buzzing about.

Craving more input on SunPower? Start by adding it to your free and personalized watchlist. It's a free service from The Motley Fool to keep you up to date on the stocks you care about most.

Can This Solar Stock Light Up Your Portfolio? @themotleyfool #stocks $SPWR $FSLR Next Article
Current