Consider an investment in this company: Revenue and net income both declined 28% year over year, the company just lost $8.29 per share for the year, and it faced a behemoth competitor that seemed unassailable. This is Apple in 1997. And, in many ways, it's also Dell today. Can Dell pull an Apple-like turnaround, and knock on the door of a trillion dollar market cap a decade from now?

Leadership
In 1997, Steve Jobs returned as CEO of Apple. But, revenue didn’t begin trending upward until 2003, with the release of the iPod. It took Jobs six years to turnaround the company, and eight years until he notably boosted profits. Michael Dell, while only absent from his CEO post for three years compared to Jobs’ leave of over a decade, returned only in 2007. Compared to Jobs’ timeline, he still has a few years to show a marked turnaround – of course, Dell isn’t in as precarious as a situation as Apple was, as it still earned $1.68 per share over the past 12 months: 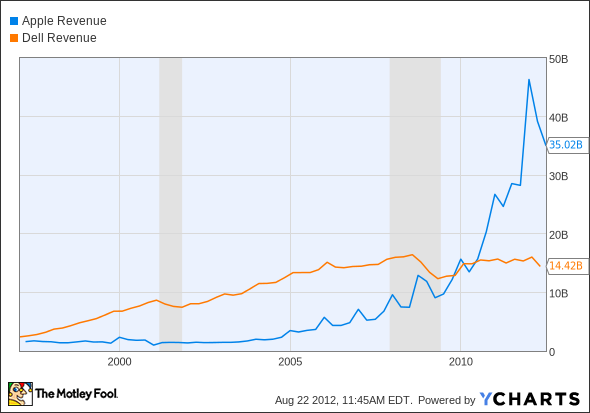 Does Dell have the same egotistic, controlling, and uncompromising style as Jobs? We may have to wait until his own biography to find out exactly how much, but characterizations from a BloombergBusinessweek piece in 2003 paint him as "impersonal and emotionally detached," and "an off-the-charts introvert," with an "egoless demeanor" and a "belief that the status quo is never good enough." It seems he is part Jobs, focused on performance, and part anti-Jobs, without ego. Let’s give Dell the benefit of the doubt that he has the talent to lead a turnaround. After all, he did create the $20 billion company.

Corporate competence
The same piece from 2003 mentions that Dell’s "mission is to build the Current Big Thing better than anyone else," capitalizing on their efficient processes rather than guessing where technology will head. Unfortunately, when Dell noticed the mobile computing trend, and tried to create a tablet, the Dell Streak, it lasted barely a year before being discontinued last year. While surviving longer than Hewlett-Packard TouchPad, which lasted about two months, the result was the same: further proof that Apple’s iPad owned the tablet market, and producing a better product was going to be difficult. Dell is still set to release new tablets soon on the back of Microsoft’s Windows 8 release in October, with a focus on enterprise desires, like security and interoperability.

Unfortunately, Apple now seems to match Dell’s manufacturing ability through its vertical integration. From buying up component producers, like flash memory maker Anobit at the beginning of this year, to designing its own processor for the iPhone and iPad, Apple has streamlined its production, and cut reliance on suppliers. So can, or even does, Dell have to match Apple in its design, now that Dell’s efficiency is matched?

To a point
Dell’s consumer business is about 18% of its revenue and, while still a large chunk, it could make up this declining consumer revenue in enterprise sales. Enterprise clients care less about design and brand, and more about security and price – which is how Dell, Microsoft, and HP will try to sell their products. Still, even with the claimed security issues, Apple said a "very large percent of the Fortune 500" use iPads. It’s hard to picture a world where Dell can win the competition for consumers; however, the company could maintain and grow its appeal to businesses -- especially as it builds its security and cloud services.

On the other hand, while Dell’s current relationships with government and enterprise clients will give it momentum going forward, Microsoft could end up squeezing Dell with its venture into hardware. And Dell will have to compete with Google , which  offers its own email, document, data storage, notebook, and now, tablet solutions that are all free of Microsoft’s platforms.

It doesn’t look good
Dell’s competitive advantage of efficiency has eroded, and now lives off of enterprise relationships that have attracted plenty of entrants. Michael Dell has the chops to lead the company, but will need to keep offering customers new technology and price points that at least match competitors. The cost of switching vendors for enterprise customers will keep Dell alive for the time being, but it shouldn’t rely on that, as Google, Microsoft, and Apple lurk.

In 10 years, it’s more likely that Dell sits at its current market capitalization than the trillion-dollar mark.

On the other hand, if you’re wondering whether Apple can continue its monstrous rise, including three key areas you must watch, and three reasons to buy and sell now to help you reach your own decision, check out our brand new premium report. The report also comes with free critical news updates for one full year, so grab your copy of our Apple report today.