These three factors could hold the key to big gains with GE.

General Electric operates as a conglomerate with technological innovations in the energy, transportation, and health-care sectors, as well as services in the financial sector.

Today, let's look at three things investors should be watching regarding General Electric, as they will provide us with better insight into the company.

1. The health of GE Capital
Even though GE Capital is no longer a vital component to General Electric's growth, it was the segment that brought this previous dividend aristocrat to its knees and dropped its share price below $10 during the height of the credit crisis. In 2008, GE Capital accounted for more than $12 billion of GE's $29 billion in profits. However, a mixture of subprime mortgages in the U.S., compounded with a portfolio laden with poor-quality personal credit card loans and car loans in the U.S. and in Europe practically crushed the company and forced it to seek $3 billion in financial assistance from Berkshire Hathaway and issue an additional $12 billion in stock.

Four years removed from this debacle and things are once again looking better for GE Capital. Although revenue has been contracting as the company continues to wind down some of its U.S. and European investments, the amount it's needed to set aside from loan loss reserves has been falling, and, more importantly, its net interest margin (the difference it makes on what interest rate it borrows at and what rate it lends at) has been on the rise. Challenges still remain for GE Capital, but keep a close eye on its net interest margin and non-performing loan rates for clues as to which direction this financial arm is headed.

2. The energy infrastructure split
Perhaps the biggest news in GE's latest quarterly report was its plan to split its energy infrastructure business into three separate segments. The goal would be to save up to $300 million in costs and to bring new leadership to the forefront while also giving each segment a greater focus. For U.S. companies that do quite a bit of business overseas, cutting costs is a smart move. As I highlighted last month, GE and its rival United Technologies both lost $900 million and $800 million, respectively, to currency translations in their most recent quarterly results.

The three new segments will be oil and gas, power and water, and energy management. The move does make a lot of sense as well, since GE's energy infrastructure's revenue rose by 15% last quarter. It's also not the first time we've seen a conglomerate propose breaking itself into smaller, more manageable components. Tyco International has proposed breaking up into three separate businesses to be more transparent to investors, to provide better segment focus, and to reduce costs. As the Fool's David Meier suggested in a recent interview, GE's energy operations split will allow for greater sector focus and should allow GE's oil and gas segment to better compete against Caterpillar's solar turbines.

There are a lot of unanswered questions here, but it's an unfolding story worth keeping your eyes on.

3. GE's dividend and the health of Europe
OK, so it's practically impossible to squeeze GE down to just three factors to watch, so consider this a two-for-one special.

One aspect investors should keep an eye on has to do with the overall health of the global economy. As I mentioned earlier, GE's overseas sales put its revenue stream at risk because of a spending slowdown in Europe. Highly volatile foreign currencies also threaten to shrink GE's profits, as we witnessed in its most recent quarter.

But, the real draw of GE was, and will continue to be, its consistently healthy dividend yield. 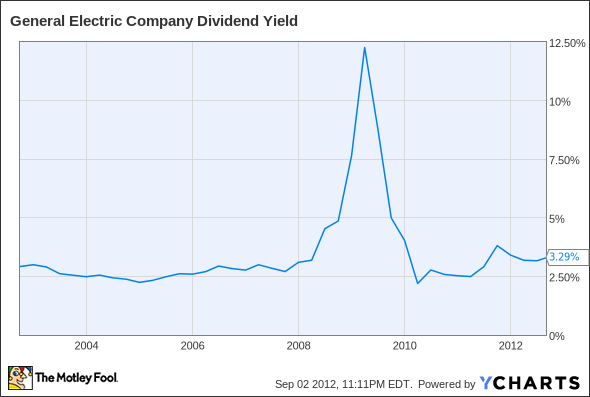 GE's dividend took a big hit when the credit crisis hit, but it's slowly been on the mend. Since dropping its dividend by roughly two-thirds in 2009, GE has since increased its quarterly payout by 70%, to $0.17 each quarter from $0.10. Now yielding 3.3%, GE offers one of the highest-yielding dividends among conglomerates, and it's once again attracting the interest of income-seeking investors.

Foolish roundup
Now that you know what to watch for, it should be easier to analyze General Electric's successes and pitfalls in the future and hopefully give you a competitive investing edge.

If you're still craving even more info on General Electric, I would recommend adding the stock to your free and personalized Watchlist so you can keep up on all of the latest news with the company.

Will GE's turnaround continue to prove fruitful for shareholders, or will its financial arm and global weakness sink this ship? Find out the answer to this question and much more by getting your copy of our latest premium research report on General Electric. This report highlights the opportunities and pitfalls that could affect GE's share price and comes complete with one year of regular updates. Get your copy and claim your investing edge.