I warned you there were two things that could potentially hold back Apple's (NASDAQ:AAPL) iPhone 5 with supply constraints: baseband processors from Qualcomm (NASDAQ:QCOM) or in-cell touch displays from Sharp, Japan Display, and LG Display (NYSE:LPL).

According to Barclays analyst Ben Reitzes, it's the latter that's causing the bottlenecks. In-cell touch is one of the important engineering advances that Apple's display suppliers achieved that facilitates the new device's thin profile by integrating the touch sensors directly into the LCD display and eliminating the need for a separate layer. 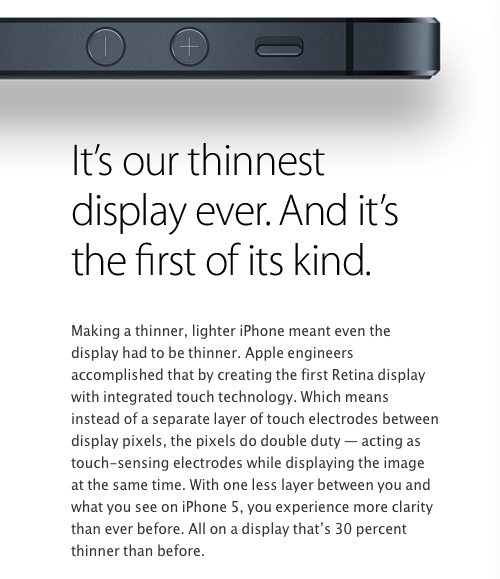 Reitzes believes the iPhone maker is facing "significant production constraints" because these displays are so hard to come by. Earlier this month, The Wall Street Journal reported that Sharp had just begun shipping these screens to Apple, weeks behind schedule, as the supplier was running into manufacturing hurdles.

Next quarter, things should get better as production ramps up quickly, and Reitzes is looking for 45.2 million iPhone units, about 8 million more than the current quarterly record of 37 million. With the calendar third quarter rapidly winding down, Apple may not see too much iPhone upside by month's end.

Qualcomm had already expanded its own supplier base beyond Taiwan Semiconductor Manufacturing (NYSE:TSM), tapping other contract manufacturers like Samsung and United Microelectronics (NYSE:UMC) to help it meet demand for its next-generation Snapdragon processors, as well as iPhone-bound baseband modems. It looks like those efforts may have been successful (in that the in-cell displays are what are bottlenecking the iPhone, and there haven't been reports of baseband shortages).

I can't say I'm surprised with these reports. If it wasn't one, it would have been the other.