The pharmaceutical industry has gotten a major shot in the arm this year. Shares of Abbott Laboratories , Merck , and Eli Lilly all hit fresh 52-week highs on Tuesday, following in the footsteps of industry leader Pfizer and its consistent 2012 gains. Let's dig deeper to find out what's gotten investors hooked on big pharma and whether this drugmaker domination can continue.

How it got here
The big four I mentioned earlier have been perhaps the best stocks among major pharmaceutical manufacturers. GlaxoSmithKline is also nudging toward a new 52-week high of its own, but its 52-week performance lags the others by a wide margin, and also slightly underperforms the S&P 500 over that time frame: 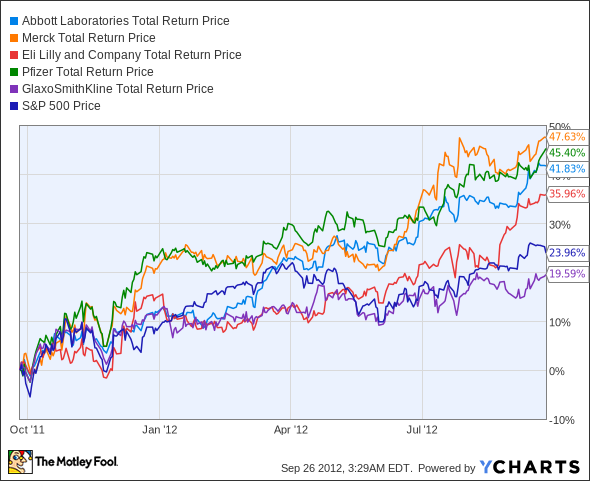 These gains aren't without warning signs. As I mentioned in my discussion of Pfizer's 52-week high earlier this week, a patent cliff looms for most of the major drugmakers. For Merck, Singulair's recent patent expiration threatens to cut into over a tenth of its revenue. Lilly's patent portfolio seems exceptionally weak, with a number of its blockbusters (and up to three-quarters of its revenue) dropping out of protected status in the next few years. At least the patent for Humira, Abbott's anti-inflammatory blockbuster, doesn't expire until 2016. That leaves Abbott with a bit more time to prepare than its peers.

Of these companies, only Merck has devoted significantly more resources to R&D this year. GSK and Pfizer have taken the dangerous step of significantly reducing R&D expenses, and Abbott's research investment has dropped slightly. Can these stocks remain good investments as they rumble toward the patent cliff? Let's look at some cold, hard numbers to find some answers.

What you need to know
These companies have a bit of variation in their valuations, but all share one thing in common -- high payout ratios for strong dividend yields:

As these companies have recovered from the recession, their P/Es have all grown. Merck's has seen the most growth by far, leveling off at a threefold increase after a huge spike to close out 2010, but only GSK has a roughly similar P/E to its 2010 level: 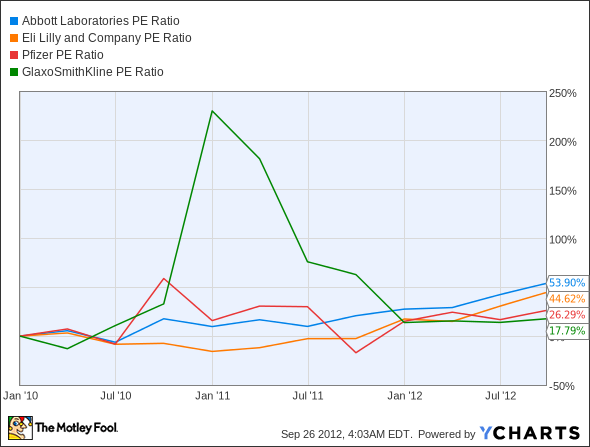 ABT P/E Ratio data by YCharts.

In that period, all but Pfizer have increased their payout ratios, some (Abbott and Merck) by a significant amount. With all five companies' payouts eating up more than half their net income, dividend cuts may be likely, particularly if new blockbusters fail to materialize before the current ones succumb to generic competition.

What's next?
These dividends look quite appealing, and yield-starved investors have enjoyed the safety (and gains) of numbers this year as more money continues to flow into big pharma. However, the downside to this flocking behavior is that the flock may be easily spooked by signs of weakness, either in a particular stock or in the economy at large.

The Motley Fool's CAPS community doesn't think there's much of a risk for big pharma investors. Our CAPS players have given Abbott a perfect five-star rating, and the other four companies on this list all earn four stars. If you're interested in tracking big pharma in the months and years ahead, add these companies to your Watchlist. You'll get all the news we Fools can find delivered to your inbox as it happens.

There are plenty of companies that offer good yield with virtually no patent risk. The Fool's put together a list of nine rock-solid dividend stocks for our readers, and you can find out everything you need at no cost. Click here for your free list of rock-solid dividends now.