Tesla Motors (NASDAQ:TSLA) is leading the charge to make electric cars that people actually want to drive. The company's gas-free vehicles are transforming the automotive industry one Model S sedan at a time. And it's easy to see why. Tesla's all-electric luxury car offers superior driving performance to the tune of zero to 60 mph in just 4.4 seconds, and it boasts a range of 300 miles for the signature 85-kWh battery version. My Foolish colleague Rex Moore took a spin in one of Tesla's new Model S sedans here in Washington, D.C.; check out the video to get his behind-the-wheel take on the electric car.

Unfortunately, disruptive technology and an innovative product lineup will only get Tesla so far. That's because widespread consumer acceptance of electric vehicles is required for Tesla and other EV manufacturers to make meaningful inroads.

Charging ahead
A major setback to driving an electric car is the inconvenience of having to recharge -- an issue that has plagued EV adoption since the end of the 19th century . However, one company that's bent on changing this is Tesla. Last month, the Silicon-Valley based start-up pulled the curtain back on its new Supercharger network at an event in California.

With its first six Supercharger stations already in use in California, Tesla plans to install over 100 more solar-powered carports throughout the United States by 2015. The ambitious rollout also includes plans to install Superchargers throughout Canada in the next four or five years. Not only will these electric fueling stations be free to use, but they will also return more power to the grid . For critics wondering if this is too good to be true? Think again.

Revolutionizing the game
Thanks to a strategic partnership with SolarCity and existing charger capabilities in its electric cars, Tesla can deploy Supercharger stations very inexpensively by leveraging the economies of scale in its Model S. That's exciting news for Tesla investors, as well as Tesla customers who can forever fuel their electric cars for free. In his presentation of the Supercharger network, Tesla CEO Elon Musk emphasizes, "You will be able to travel for free, forever, on pure sunlight."

For Tesla, the Supercharger network stands to solve another overused argument against EVs: the inability to drive long distances with high convenience. Musk discussed the game-changing Supercharger technology at the event explaining, "You can drive for three hours, stop for less than half an hour, recharge, and be ready to go again." Though, if you ask Musk, coast-to-coast trips are just the beginning of the gas-free revolution. 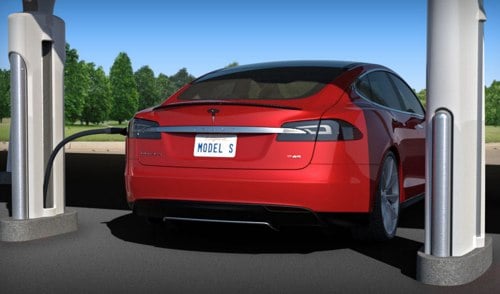 When was the last time you filled up at the pump for free? With gas prices in the U.S. having soared to record highs this year, there's little wonder why so many U.S. corporations are joining Tesla in the fight against transportation's dependence on foreign oil. Other publicly traded companies making big bets in the green-tech space include General Electric (NYSE:GE) and IBM (NYSE:IBM).

These companies and others like them are creating innovative solutions for sustainable energy. GE is focused on enhancing the power grid with its EV charger, GE WattStation.  The conglomerate has also joined forces with Nissan to better integrate electric cars with the smart grid. Research and development agreements like this could help speed up the rate of EV adoption. IBM is also heavily investing in solutions that address today's energy problems.

Together with ESB ecars, IBM is currently developing mass-scale IT charging stations for installation across Ireland. In a recent press release, IBM explained other reasons for the partnership, saying, "this project will provide utilities with access to energy usage data that can help improve smart grid operations, reduce power strain during peak charging times, and ensure reliable energy distribution to customers." Equipped with IBM's Intelligent Electric Vehicle Enablement Platform, the ESB Network is on a renewable fast track to becoming one of the largest integrated EV infrastructures in Europe .

A global solution
Multinational corporations, cities, and municipal centers around the world are working together to accelerate the transition to EV technology.  Today, even traditional automakers are jumping on board with hybrid and electric versions of their popular gas-guzzling cars. Ford (NYSE:F) joined the party earlier this year with its fully electric Ford Focus.

Not one to be outdone, GM (NYSE:GM) released its updated Chevy Volt -- a hybrid vehicle with a backup gas generator. While not fully electric, hybrids should help wean consumers off gas-powered cars.

Still, a key difference between Tesla and these established carmakers is that Tesla isn't building gas-free cars as an oil hedge. Quite the opposite, in fact -- Tesla understands where EV technology is headed, which gives the zero-emission-car maker a disruptive edge over bigger rivals.

Investing in innovation
At this point, it's only a matter of time until domestic roads fully support electric cars. That's why I believe that patient investors with at least a five-year time horizon would be wise to invest in the companies at the forefront of this EV revolution. However, for some investors Tesla may still be too much of a speculative play. In which case, you should consider a more established player such as Ford.