If 3D Systems' (NYSE:DDD) second quarter was a bit of a mixed bag, its just-reported third quarter is as close to a corporate home run as a public company can get. All the good stuff has improved: revenue and net income are up, and so are the company's operating margin, net margin, printer sales, and cash balance. The only possible red flag over the past several quarters is a rise in share count, but in five years the company's outstanding share count has only increased by 25%, which is well within reason for a high-growth enterprise.

Let's dig into the numbers a bit deeper to find out what made this such a strong quarter, and maybe we'll see if 3D Systems' building momentum can carry it clear through 2013.

What the numbers tell you
In the second quarter, 3D Systems' net income seemed to be stagnant, but that is certainly not the case this time. Non-GAAP net income came in at $18.2 million, a 31% sequential improvement over the second quarter's non-GAAP results and a doubling from the year-ago quarter. Unadjusted net income (the type we wind up analyzing long after reports are filed) rose to $13.5 million, which represents an even more impressive sequential gain of 63%. The company's net margin improved from 15.8% last year to 20.1% this year on a non-GAAP basis, which is an impressive increase. 3D Systems' GAAP net margin was 14.9% in the most recent quarter, compared to 12.5% in the year-ago quarter. 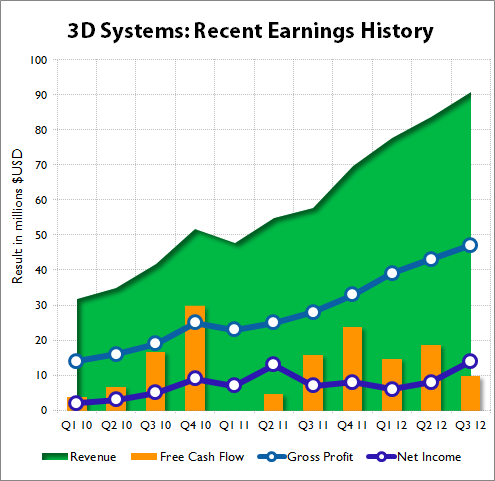 Thanks to a secondary offering completed in June, 3D Systems now has about $110 million more in cash on hand than it did a year ago. This is very important now, at a time when both 3D Systems and rival Stratasys (NASDAQ:SSYS) are in the middle of a frenzied consolidation battle. Stratasys, at last count, has only $56 million in cash and investments , less than a third of 3D Systems' current $183.9 million hoard.

The consolidation fight has hardly slackened, as 3D Systems recently bought Rapidform, described as a "3-D reverse engineering and inspection software" provider, to support its new growth initiative that appears to focus on streamlining the development of 3-D models. The $35 million acquisition is projected to create $15 million in new high-margin revenue next year. All these acquisitions have kept the company's free cash flow from taking off, but the cash in the bank provides a valuable and necessary cushion as 3D Systems continues to scoop up smaller players.

3D Systems also provided a few specific tidbits on where its revenue came from, so let's quickly run through a few of the key stats for the third quarter:

Foolish final thoughts
It's not just 3-D printing that's taking off, either. Proto Labs (NYSE:PRLB), which offers a similar sort of service to 3D Systems' on-demand parts segment, saw its share price leap by an even greater percentage than 3D Systems' did following its own impressive earnings release. Rapid prototyping, whether it's done via injection-molding and machining methods or through high-end 3-D printers, has become increasingly essential to companies that demand the fastest product development cycles possible. There's no indication yet that the two technologies are competitive rather than complementary, but investors in either alternative would be well advised to watch both sides.

If 3D Systems' second quarter made me a little nervous about its forward momentum, the third quarter is very reassuring. This company seems to have a lot left in the tank. However, as with any high-growth stock, one indication of weakness (as seemed to occur after the last earnings report) could lead to a share-price slump. Keep watching 3D Systems closely. It's got a long way yet to go.