Exelon (NASDAQ:EXC) isn't excelling at much today. The utility reported its third-quarter earnings, and its profits don't look pretty. Let's dig deeper to see if this quarter's a coincidence, or if Exelon's headed for dividend disaster.

Now the bad news: Even though Exelon's sales were up, Wall Street expected $7.67 billion, more than 20% higher than the utility's number.

But it gets worse: Although the company grew its top line, its bottom line's bottom dropped out from underneath it. GAAP net income fell a whopping 50.7%, from 2011's $601 million third quarter to the company's most recent $296 million pocket change. For shareholders, that's the difference between $0.90 EPS last year and $0.35 EPS today. Ouch.

Where did all the money go?
This is the third straight quarter that Exelon's net income has fallen, and long-term trends don't paint a pretty picture for this company. 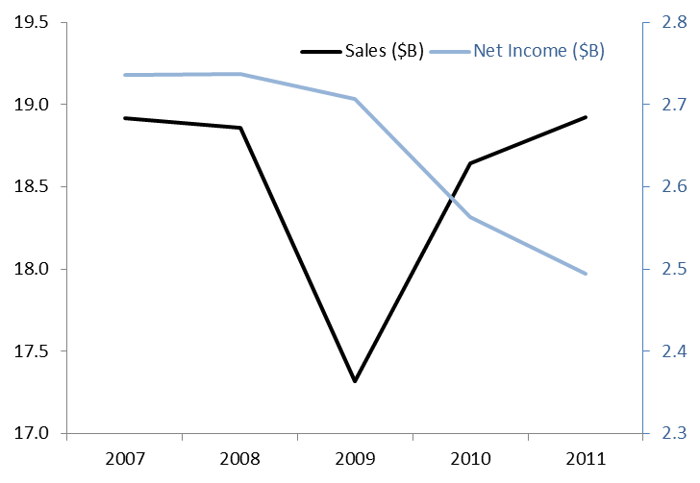 Sales and income dipped during the Great Recession, which is to be expected. But as revenue bounced back to pre-recession levels, net income has continued to slide downwards.

In its most recent earnings report, the company cites six reasons for its lackluster performance:

The big picture
Exelon's quick to make excuses for its miserly quarter, but let's examine the greater context of Exelon's past, present, and future:

Gone with the dividend?
Exelon offers a salivating 5.9% dividend, but this earnings report will undoubtedly leave more investors questioning the long-term sustainability of this yield. Let's take a look at how it holds up to competitors:

Exelon comes out on top in debt, tied with Duke Energy. But when you consider the company's top-dollar dividend and cheapest price-to-book ratio, you can understand why dividend investors aren't ditching Exelon just yet.

But it can't go on like this forever. Exelon recognizes its financial challenges and is cutting back on non-critical spending.

It expects significant capex reductions between 2013 and 2015, including holding off on $1 billion in uprates for two nuclear plants and $1.25 billion in funding for wind and solar projects.

My guidance on Exelon's guidance
I'm not convinced. The company's track record has me worried and cutting back on upgrades and energy diversification is going to hurt Exelon's long-term potential, even if it puts a financial Band-Aid on dwindling quarterly earnings reports.

Exelon has a nice fat dividend and reasonable debt, but its fundamentals and recent strategic decisions leave me with the impression that management's eyes are set on short-term shareholder happiness, and not sustainable growth.