Ever since Caesars Entertainment (NASDAQ:CZR) hit the public market, the questions I've asked about the company have had more to do with survival than anything else. The company consistently reports huge losses, its markets aren't improving at all, and it has a debt load that points to bankruptcy unless something dramatically changes with its balance sheet.

The company's recently released earnings report does little to ease any of those fears.

Let the losses begin
The third quarter showed little in the way of improvement for Caesars. Revenue rose a paltry 0.4% to $2.2 billion, adjusted EBITDA rose the same amount to $484.5 million, and net loss tripled to $505 million, or $4.03 per share.

The number of trips from vacationers decreased in every one of Caesars' markets in the third quarter, and if it weren't for a 7.8% bump in spending in Las Vegas, spend per trip would have been down in each locale as well.

Zero growth wouldn't be a problem if Caesars wasn't spending every penny it got on servicing debt, but with over $20 billion in debt that's exactly what the company is doing. Take a look at EBITDA minus interest expense below. This shows that Caesars is barely able to pay for its debt, and this doesn't even include ongoing capital improvements and some other operating expenses, which brings overall cash flow lower.

To look at this another way, the chart below shows how Caesars' debt problem is only getting worse. It doesn't generate enough cash flow to pay for debt, so it takes out more debt and the cycle goes on and on. 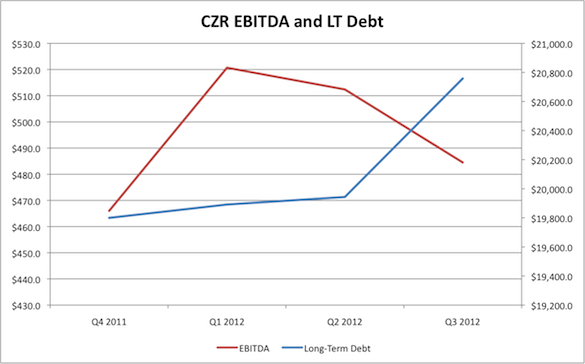 Unless operations improve, there's no end in sight to the death spiral for Caesars.

Little upside for Caesars
The biggest problem for Caesars is that it has little upside in most of its markets. Las Vegas is mature and won't likely grow double digits unless the economy makes a surprising turnaround. In regional markets, the company is contending with a growing number of casinos across the country as states approve gaming to expand tax revenues.

Compare this to Macau, where Las Vegas Sands (NYSE:LVS), Wynn Resorts (NASDAQ:WYNN), and MGM Resorts (NYSE:MGM) have limited competition and growing demand from gamblers. All three of these companies own Las Vegas casinos but they also have resorts in Macau, where gaming is far more profitable.

Even in the U.S. there are better gaming stocks. Penn National (NASDAQ:PENN) is in the same slow-growth gaming markets as Caesars, but the company is solidly profitable because management didn't pile on debt during the boom years. Caesars can't even see profitability on the horizon.

Caesars has a little time
So, how long can Caesars survive? The company doesn't have any major debt maturities before 2015, so there's no reason to think the company will go under before that, unless conditions really deteriorate. But that's when the rubber really meets the road. Caesars is still benefiting from low interest rates and the notes due in 2015 are at rates mostly below 4%. If the company has to refinance at higher rates because general rates go up or the company continues to struggle -- or both -- the company could be in real trouble.

Caesars will be fine for at least three years, but if we continue to grow U.S. GDP at 1% to 2%, I doubt the company can survive after that. The legalization of online gaming may also help, but that's a dream for shareholders right now. I'm afraid this stock is still hands-off in this Fool's opinion.