This is the second to last in a series of commentaries on the Dow Jones Industrial Average component stocks that are in each S&P 500 sector, where so far we have looked at the telecommunications, financial, consumer discretionary, consumer staples, health care, energy, and industrials sectors. I reviewed each sector in the order of their returns year to date. We continue to see shifting occur as we near year's end. The following chart ranks each Dow sector by total return year to date, including dividend yields. This time we review the materials sector, comprised of E. I. du Pont de Nemours (NYSE: DD) and Alcoa (NYSE: AA). Let's see how they have done so far this year.

In the past, my research has incorporated a Motley Fool Earnings Quality Score that taps into a database that ranks individual stocks. The database designates an "A" through "F" weekly ranking, based on price, cash flow, revenue, and relative strength, among other things. Stocks with poor earnings quality tend to underperform, so we look for trends that might predict future outcomes.

DuPont
It's almost unfair to place DuPont in the materials sector because the company has nine diverse segments ranging from agriculture to nutrition and health to pharmaceuticals. DuPont's core businesses are performance coatings, chemicals, and materials; it refers to itself as a science and technology company. For its last quarter, DuPont disappointed the Street with significantly lower earnings as well as an announcement of possible 1,500 layoffs.

Despite increasingly accommodative credit terms as evidenced by its rising days sales outstanding, DuPont's declining revenue reflects a company that garners 61% of sales from Europe, which has problems, as we know. Receivables are down over 6%, but up 5% as a percentage of revenue. Fourth-quarter average receivables continue to rise. It is alarming that receivables are over 100% of revenue and growing, and the story reeks of desperation to do whatever it takes to move product to buyers who, frankly, are likely already overburdened with inventory. With only $10 million in net income for the quarter, it's easy to understand why operating cash flow has declined over 55% from the year-ago quarter. 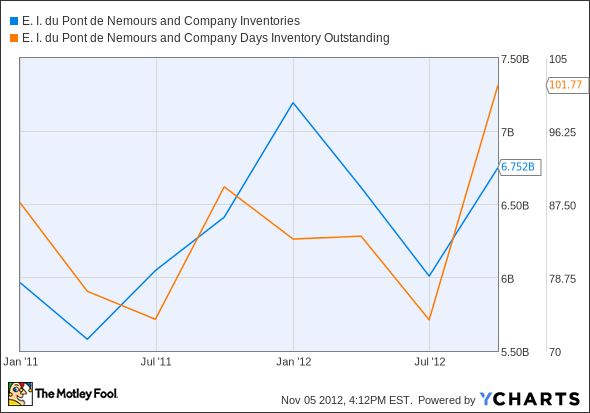 Inventory is growing and days sales in inventory are up nearly 15% year over year. Some good news is that the ratio of finished goods inventory to raw materials has been declining steadily. DuPont's glimmer of sunshine is its 3.9% dividend yield. DuPont is clearly not a buy here, but you should watch each quarter carefully for any improvement in fundamentals. Also note, each quarter ending March shows above trend numbers. You could also consider DuPont as a "Dog of the Dow," as January is just around the corner.

Alcoa
Alcoa makes aluminum but also engages in the mining of bauxite which is then refined into alumina. The company is another multinational that relies on global economic trends and conditions for the majority of its sales. Like its sister materials sector stock, DuPont, Alcoa suffers from declining revenue and, to a lesser extent, inventory issues. There is perhaps a ray of hope going forward that Alcoa's metrics -- notably its revenue trend -- will begin to improve if and when the U.S. economy rebound picks up. As we know, aluminum is lighter than steel and has seen increased use in automotive and building construction in recent years.

Operating and net income have been negative for the last two quarters, as was earnings per share this quarter. Gross profit has declined for the last four quarters, and is now down to a razor-thin 10%, which is the result of its steadily increasing cost of goods sold. Negative net income of -$143 million exacerbates poor operating cash flow, which has declined year over year -85.93%. 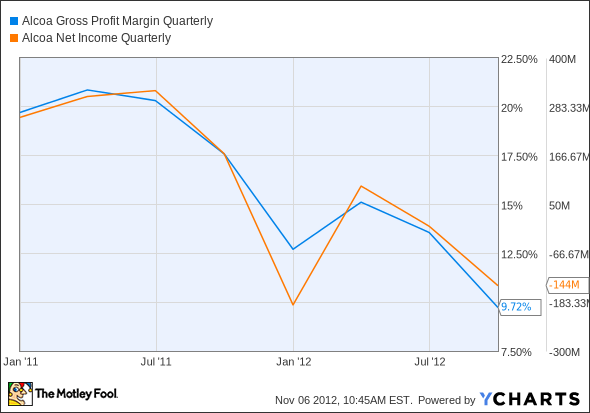 Alcoa's balance sheet metrics reflect the company's efforts to manage inventory and receivables in the face of declining revenue. Days payable outstanding -- the time it takes to pay creditors -- have steadily crept up from 41 days the same quarter two years ago to 43 days last year to 45 days. Payables as a percentage of revenue are at 44% and exhibit the same upward trend (37 days to 39 days to 44 days). Unfortunately, Alcoa's 1.39% dividend yield will not qualify it to become a Dow "Dog" next year.

Foolish bottom line
We look to companies like DuPont and Alcoa for signs of growth because they generally serve as leading indicators for economic growth, but the tea leaves do not show positive trends yet. It also appears both companies have turned to aggressive revenue recognition tactics as a means to boost revenue as much as possible. To their credit, neither company has resorted to the use of long-term debt to reduce share counts that would artificially boost per-share earnings. Foolish readers should base investment decisions on earnings quality.