French utility Veolia (OTC:VEOEY) may be ready to turn water into wine. The company reported earnings yesterday and, for the first time in a while, Wall Street liked what it saw. But Veolia still has a pile of debt and bad assets it needs to dump before I'm buying what it's selling. Let's see if it's got what it takes.

Number crunching
Veolia's top line sales grew 1.3%, to $27.6 billion, for the first nine months of 2012, a sign that the company's offerings aren't being completely ignored by its customers. But, when it comes to what the utility is doing with those funds, the story goes sour.

For a peek at the long-term perspective, here's how Veolia's sales and net income have fared over the past five years: 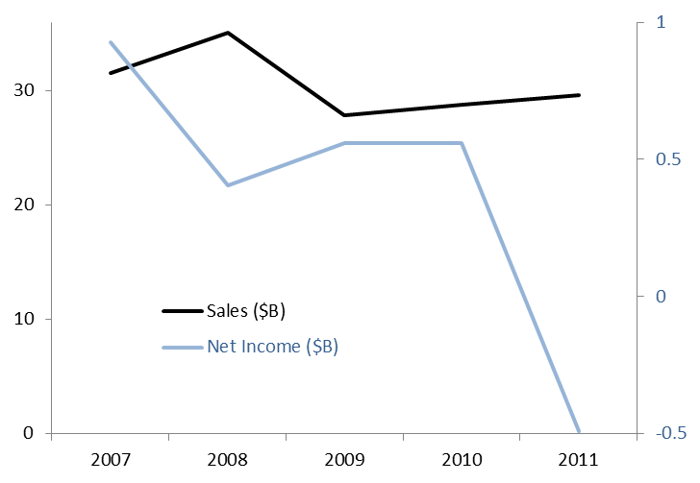 Closed for renovation
But the real news has very little to do with the company's most recent earnings. Instead, CEO Antoine Frerot took the opportunity to make some announcements that investors have been dying to hear.

First up: tackling Veolia's ridiculous debt. With almost $7.7 billion in cash, Frerot assured investors that bond buybacks are just around the corner. It plans to skim about $3.8 billion off its IOUs in the next quarter, and it'll to do it by killing two birds with one stone.

To lighten its debt load, the utility will sell up to $6.3 billion of underperforming assets, and will also reduce investment over the next few years.

It's a small world after all
As the world's largest waste and water utility by revenue, it might seem contrary that Veolia's number one goal is downsizing. But, bigger is not always better, especially since Veolia's operations ballooned just before the Global Recession. Bad management and bad timing proved to be too much for the company, and it began a stock market spiral that has yet to see a bottom... 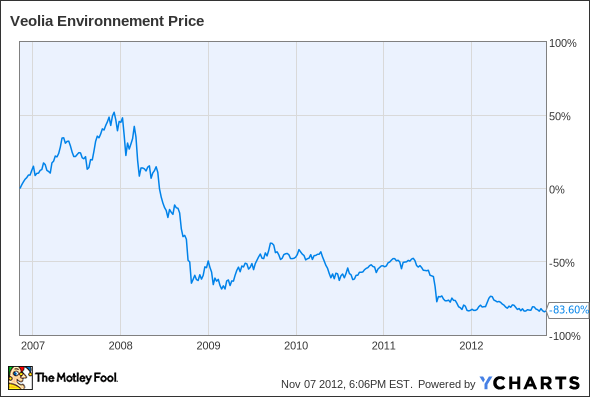 ...until now. Shares were up 3.8% yesterday, as some investors glimpsed a sliver of light at the end of Veolia's wastewater tunnel. From a 77-country exposure, the utility's newest guidance suggests a more manageable global reach of 40 countries. Veolia has already cut its U.K. water and U.S. solid waste subsidiaries, and plans to bow out of its marine services businesses in Egypt, Morocco, and the U.S.

The end of the dividend?
With all this talk of restructuring and financial responsibility, it would've been impossible for Veolia to ignore its looming dividend. The stock's dividend yield hovered around 7.3% before today, and crippled the company with a 100% payout ratio.

Unfortunately, the newest announcement of a $0.89 dividend for FY 2012 puts Veolia's yield at approximately 8.7%, a whopping 20% increase.

Veolia is a dividend play, no doubt about it. But it's only a buy if it can remain in the game. Let's see how its valuation and dividend stack up against other water utilities:

Although the dividend scares me, it's hard to argue with Veolia's ridiculously low valuation. At less than a third of its closest competitor's price-to-cash flow ratio, Veolia could be the perfect long-term play.

But the laws of gravity don't apply to the market. Just because Veolia's down today doesn't mean it'll be up tomorrow, no matter how juicy its dividend is.

Is Veolia back?
I like what I'm hearing from management, and I'm tempted to buy into the utility's turnaround story. But talk is cheap, and the company's refusal to lower its dividend still has me worried that Veolia may be putting short-term shareholder interest ahead of long-term growth.

I'm going to be watching this company closely over the next few months, and keep my fingers crossed that next earnings season's quantitative results back up this report's qualitative outlook.