But in case any of you need a refresher: just six months after the original iPad was launched in 2010, Steve Jobs participated in the October conference call.

Jobs normally never participated in conference calls, leaving them to then-COO Tim Cook and CFO Peter Oppenheimer, but this was Apple's (NASDAQ:AAPL) first $20 billion quarter, so he decided to make an appearance. At the time, 7-inch tablets were just starting to show up on the scene, and he had some choice words.

... unless your tablet also includes sandpaper, so that the user can sand down their fingers to around one quarter of the present size. Apple's done extensive user-testing on touch interfaces over many years, and we really understand this stuff. There are clear limits of how close you can physically place elements on a touch screen before users cannot reliably tap, flick, or pinch them. This is one of the key reasons we think the 10-inch screen size is the minimum size required to create great tablet apps.

"... we think the current crop of 7-inch tablets are going to be DOA, dead on arrival. Their manufacturers will learn the painful lesson that their tablets are too small and increase the size next year, thereby abandoning both customers and developers who jumped on the 7-inch bandwagon with an orphan product. Sounds like lots of fun ahead.

Jobs made it clear that Apple thought anything smaller than about 10 inches or so was destined for failure, in part because the interface would be too small (even as the smaller iPhone has the same interface).

I'm a believer
I don't believe that a 9.7-inch display is the perfect size for a tablet, but a 7.9-inch display really is. I recently decided to go pick up an iPad Mini to give it a fair shot and see if it really could sway me away from my third-generation iPad with Retina display. In all honesty, I didn't think it could be done. My full-sized iPad had that incredibly sharp display and beefier processor. I was sure that Apple had ruined my eyes to all non-Retina displays and that the low-resolution display, the iPad Mini's biggest weakness, wouldn't cut it. 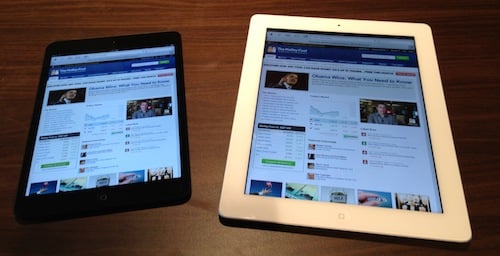 I now believe that the iPad Mini will become the dominant form factor for the iPad product family, because it embodies mobility better than the full-sized version and the tablet game has always been about mobility. More importantly, people don't buy the full-sized iPad just because of its 9.7-inch display -- they buy it because it's an iPad and it has superior build quality coupled with the most robust tablet content ecosystem.

That's why the iPad Mini will succeed, despite its premium pricing and relatively lackluster display.

What choice?
Strategically, it makes sense why Apple chose the same 1,024 x 768 resolution. A 2,048 x 1,536 Retina panel isn't available yet in adequate volumes due to technical limitations, and it was clear that a competitive response was needed sooner rather than later. The relative success of 7-inch rivals like Amazon.com's (NASDAQ:AMZN) Kindle Fires and Google's (NASDAQ:GOOGL) Nexus 7 are proof of that. Those two devices played no small role in Apple's recent slip in tablet market share to "just" 50%.

In that case, Apple faced two tough choices: introduce a third screen resolution with better pixel density and risk fragmentation, or use the same resolution but guarantee app compatibility with 275,000 tablet-optimized apps right out of the box. Apple has successfully used the same formula in the past of emphasizing content over specs, so we've seen this move before. Unsurprisingly, it chose the latter.

The iPad Mini will be huge
Fortunately, the iPad Mini fetches higher gross margins than the full-sized iPad. In dollar terms, Apple generates less gross profit per unit, but I also expect the Mac maker to make up for that in volume due to the lower pricing and broader consumer and educational appeal.

I think it's very feasible that the iPad Mini will soon eclipse the full-sized iPad in terms of unit sales, which is no small feat when you consider Apple just sold 31 million of them in the past two quarters.

It begins
The iPad Mini hasn't even been out for a full week, yet the rumor mill has already begun churning. Reports from the Far East say that Apple has already tapped AU Optronics (NYSE: AUO), which also supplies display panels for the current iPad Mini, for Retina caliber displays with that 2,048 x 1,536 resolution.

That would translate into 324 pixels per inch, or ppi, on par with the iPhone 5 and well above the Kindle Fire HD or Nexus 7.

If Apple sticks with an annual upgrade cycle, the second-generation model would be due out in the fourth quarter of 2013. Until then, Amazon and Google will inevitably update their own offerings, and the market will vote with its wallet whether or not it will settle for the low-resolution screen.

It's out to get you
If you ask Tim Cook, the iPad Mini is in a different league. When essentially asked "Why now?" about the smaller tablet, he directly acknowledged Jobs' comments in his response:

On your question about iPad Mini, the comment that I think you're referencing are comments that Steve had made before about 7-inch tablets. And let me be clear, we would not make one of the 7-inch tablets. We don't think they're good products, and we would never make one. Not just because it's 7-inches, but for many reasons.