At the beginning of 2012, I set out to form The World's Greatest Growth Portfolio.  Though I can't promise it will always live up to its moniker, the portfolio has returned 22% in just 10 months, besting the S&P 500 by about 9 percentage points.

Today, I'm going to take a deep dive into a stock I've long been interested in -- SodaStream (NASDAQ:SODA). Read all the way to the end and I'll offer up access to a special premium report that dives much deeper into SodaStream than I can in just one article.

Let's be honest, there's nothing quite like using a company's product to get a feel for what it's all about. When my brother sent my wife and me a SodaStream at-home soda-maker, we had just that chance. Since then, I can honestly say that we use the machine at least once every day to carbonate our water, and we're pretty pleased with it.

Apparently, we aren't the only ones. SodaStream released earnings this week, and the company's growth has continued. For all of 2012, revenue is up 49%, and earnings per share are up 57%.

In the company's two core markets -- Western Europe and the Americas -- the trend varied, with sales up 33% and 61%, respectively. It's important to remember, though, that SodaStream was relatively well established in Europe before it came to the Americas. Combined, these two regions make up 81% of the company's sales.

On top of that, the at-home design and self-carbonating nature of the product reduces enormous amounts of waste that normal soda companies produce in a year. In fact, there was a well-documented dispute between Coca-Cola (NYSE:KO) and SodaStream this year that saw SodaStream demonstrate Coke's wastefulness right in its hometown of Atlanta.

If my experience, and these numbers, are any indication, there's no doubt that this at-home soda maker is more than just a fad.

But I still have my concerns
A lot of investors have lumped SodaStream in with the likes of Green Mountain Coffee Roasters (NASDAQ:GMCR.DL), and on the surface it makes sense: Both are companies that helped individuals easily make products in their kitchen rather than going to the local grocery store. But whereas Green Mountain is now seeing increasing pressure from the likes of Starbucks (NASDAQ:SBUX), its not so clear how the SodaStream picture will play out. I'm actually not super-concerned about expiring patents the same way others were with Green Mountain's K-Cups.

Instead, it's where the company's financial success is coming from that's got me worried. SodaStream reports its income in three segments: starter kits, or what you buy when you get the initial system; consumables, or the flavors you add to the soda as well as replacement carbon cylinders; and "other." Here's how that revenue breaks down over 2012 so far. 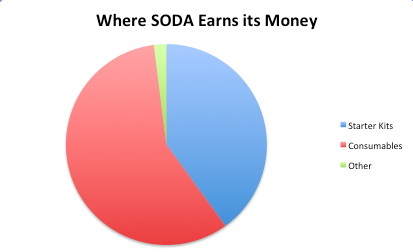 To understand why I'm concerned, consider how my wife and I use our SodaStream. Each day, we make fizzy water that we'll drink throughout the day, usually adding juice to the mix.

This juice, however, is the stuff that comes from fruit, not plastic containers. In fact, we tried one of the syrups once, and weren't huge fans. We understand that the sodas you make with SodaStreams are relatively healthier when compared to their standard counterparts, but we just aren't huge soda drinkers. I'm guessing we aren't the only one's who have moved in that direction lately.

In fact, we've only once had to get a second cylinder of carbon. Though that counts as a "consumable" in the company's reports, it accounted for just under 5% of the company's revenue through the first nine months of 2011.

Knowing that, I'm able to say that I'm a big fan of the company's product, but a little wary of its long-term potential in my portfolio.