With the stock market in nearly nonstop rally mode over the past five years, investors did not need to look far to uncover an abundance of growth stocks. But not all growth stocks are created equal. While some could still deliver extraordinary gains, others appear considerably overvalued and might instead burden investors with hefty losses.

What exactly is a growth stock? Though it's arbitrary, I'll define a growth stock as any company forecast to grow profits by 10% or more annually over the next five years. To decide what's "cheap," I'll use the PEG ratio, which compares a company's price-to-earnings ratio to its future growth rate. Any figure around or below one could signal a cheap stock.

1. Micron Technology (NASDAQ:MU)
First up this week is this memory giant.

Micron shares have pretty much gone nowhere since last summer, thanks in part, as Foolish technology specialist Anders Bylund pointed out in October, to Microchip Technologies' warning that slowing semiconductor orders could signal the beginning on an industry correction. Had this been three or four years ago this warning from Microchip would have had some merit. However, Micron has done its best to move away from low-end solutions where Microchip has made its home, and into higher-margin products.

The company's $2.5 billion acquisition of Elpida Memory, announced in 2012, is a perfect example. The purchase boosted Micron's memory market share to No. 2 in the world; even better, the company instantly gained a 50% boost in total memory capacity for about a third of the cost of building its own new facilities around the globe and training new workers.

This added capacity is going straight to Micron's top and bottom lines. In its first quarter, reported in early January, Micron delivered record revenue of $4.57 billion, up 13% from the year-ago quarter, and $1.59 billion in cash flow from operations. With memory being something of a commoditized product, as long as the U.S. economy is expanding Micron's results should remain relatively strong. 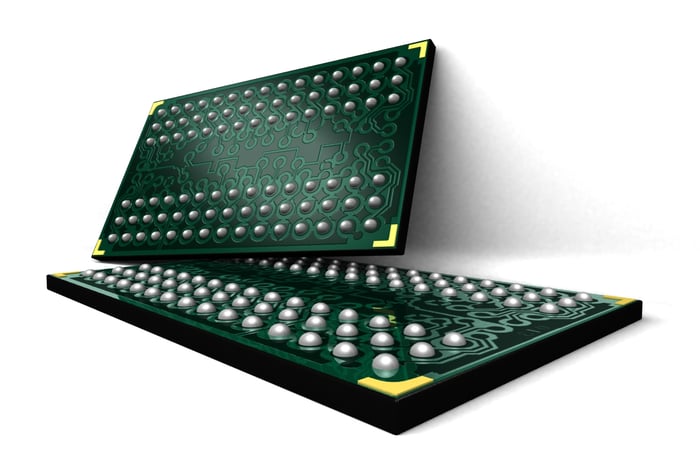 Finally, this is a demand-driven business. Because demand from businesses for DRAM has been high -- largely an effect of just three major players being left in the DRAM business and these companies switching some of their production to NAND flash memory -- Micron's pricing power has been impressively strong. As long as there is no oversupply of DRAM, which I don't personally see happening, Micron's forward P/E of just seven and its microscopic PEG ratio of 0.5 should keep it on the radars of those looking for cheap growth stocks.

2. SodaStream International (NASDAQ:SODA)
As longtime Foolish consumer goods specialist Rick Munarriz put it (and since I literally can't think of a better way to say it myself), "SodaStream blew it in 2014."

SodaStream had a monumentally bad year: It sold fewer of its at-home carbonated beverage machines and passed along substantial price increases in its flavored syrups that simply weren't well received by consumers. SodaStream's fourth-quarter revenue fell by a quarter to $126.5 million as starter kit sales plunged 32% and consumables sales (e.g., syrups) dipped 17%. Adjusted profit rose almost tenfold year over year, but a number of one-time charges made it another ugly quarter for SodaStream.

Now here's the good news: This is fixable; it just takes time.

SodaStream's at-home carbonated beverage unit still has the ability to reshape the sparkling beverage market and disrupt big players such as Coca-Cola and PepsiCo, but it must do so by first winning back consumers' trust. It has started with a new rebranding campaign that focuses on the technology and removes the mention of "soda," which is a no-no in today's health-conscious society. SodaStream would certainly be wise not to boost the pricing of its higher-margin syrups anytime soon, either, once it does regain that trust.

Second, even though SodaStream isn't selling nearly as many "razors," it is still selling the "blades." In other words, while sales of its starter kits are down, sales of its consumables fell much less. Whether that's a function of the higher year-over-year prices for consumables or some sign of consumer dedication to the product and brand remains to be seen, but it's an encouraging sign that SodaStream could find a bottom in 2015.

Lastly, and this is a point I want to emphasize is purely speculation on my part, I'd suggest that at under $20 SodaStream becomes a possible buyout candidate for a Coca-Cola, PepsiCo, or perhaps even a company such as Monster Beverage. Don't forget, Wall Street was talking buyout when SodaStream was at roughly $70 per share. Not too much has changed with the product. Rather, management simply alienated its core customer with aggressive price hikes.

A PEG ratio that is well below one and projected $2.22 in earnings per share expected by 2018, according to the consensus on Wall Street, make this a cheap growth stock that investors should seriously consider.

3. Lumber Liquidators (NYSE:LL)
Finally, we have a discount flooring specialist that was itself floored for a second week in a row after reporting disappointing quarterly earnings results and following a 60 Minutes report that alleged the company's flooring, which is made in China, contained high levels of the carcinogen formaldehyde.

The report from 60 Minutes, which Lumber Liquidators has vehemently repudiated, is expected to result in countless lawsuits around the country, as well as a possible congressional investigation.

Yet, it's hard to argue with what the company has done to turn its business around. Lumber Liquidators' three-pronged plan has emphasized focusing on the casual homeowner who may still wind up hiring a contractor to complete the flooring work; minimizing expenses by eliminating the middleman and overseeing the purchase and production of flooring product in China; and emphasizing value and discounts, which are key to bringing customers through the door.

If you can look past the next couple of quarters, in which legal expenses could rise and negative sentiment could temporarily harm its results, the company is valued at less than six times Wall Street's 2018 consensus estimate and is expected to nearly triple its profit between 2014 and 2018. It holds a niche and unique space among do-it-yourself home-improvement stores, and as long as you believe that management has been acting in the best interests of consumers and shareholders (as I do), then this could offer a long-term opportunity.

Lumber Liquidators clearly isn't without risk, but I suspect this cheap growth stock could amply reward patient and long-term-minded investors.