Tata Motors (NYSE:TTM) reported earnings last week, and the Indian automaker continues to grow its top and bottom lines. But the road ahead isn't all sunshine and sales. A slowing Asian economy and increasing competition has some investors on the run. Let's see if Tata's got what it takes to pull in profits for your portfolio.

The company managed to hold on to 4.8% of sales, with quarterly net profit of 21 billion Indian rupees ($381 million). Unlike the 20% sales boost Tata enjoyed, net income only rose by 11% compared to last year's Q2.

For a peck of perspective, here's how Tata's sales and net income have fared over the past four years: 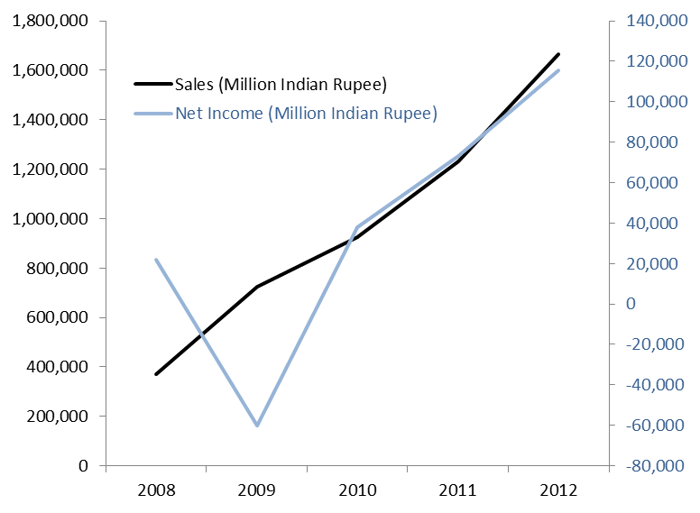 Tata's growth has been astounding. It exploded 95% from 2008 to 2009, and has pulled in around 30% sales increases since then. The company's net income has been more sporadic, although the major dip in 2008 is complements of Tata's lucrative purchase of Jaguar Land Rover from Ford (NYSE:F) for a pithy $2.3 billion.

Innovatin' India
Although the Tata family has been a household name in India for centuries, Tata Motors only reached international acclaim after its 2008 unveiling of the Tata Nano. At $2,500, it was (and still is) the world's cheapest car.

But there's more to Tata than a MacBook-priced go-kart. With Jaguar Land Rover in its garage, this auto company packs impressive diversification. This last quarter is perfect evidence.

While stand-alone sales dropped 4% to 12.5 billion Indian rupees ($2.3 billion), Jaguar Land Rover's revenue roared ahead by 13% to 3,288 GB pounds ($5.2 billion). The same trend holds for EBITDA income and profit margins. And while I'd love to see top-line and bottom-line numbers grow across the board, I can sleep at night knowing India's economy does not dictate Tata's ultimate success or failure.

Trucking along
Tata's international presence is impressive. The company draws from technological and manufacturing expertise from around the world, and its region-by-region sales reflect an increasingly diversified corporation. But it's also expanding its commercial options, with an increasing focus on light commercial vehicles. These trucks are the transportation medium for Asia's economic growth. Commercial sales are up 3.2% so far this year, compared with just 0.5% for passenger vehicles. These automobiles pack a quality punch, too, thanks to a 1996 joint venture with American engine manufacturer Cummins (NYSE:CMI).

Ford recently tapped Jim Farley as its new Lincoln brand head, a sign that the Blue Oval could be ready to ramp up its luxury car line. Toyota's (NYSE:TM) Lexus competes directly with Jaguar Land Rover in key markets like China and Russia, and Tata's recent Indonesia expansion will only increase competitive pressure between the two companies.

Say hello to Tata
The auto industry is hardly a sunshine sector, yet Tata defies conventional wisdom by growing and excelling at an admirable rate. It's got reasonable debt, exceptional margins, and continues to strategically expand its offerings to decrease its dependence on any one sector or market. Its P/E ratio of 34 isn't cheap, but I think the company's growth is still undervalued, and it sports a decent 1.7% dividend to hold you over in the meantime.

Tata won't be alone in the fight for emerging market consumers, but it's got a set of offerings and institutional knowledge that put it solidly in the lead. I've made an "outperform" call on my Motley Fool Caps page, and am looking forward to Tata's continued growth.