Every investor can appreciate a stock that consistently beats the Street without getting ahead of its fundamentals and risking a meltdown. The best stocks offer sustainable market-beating gains, with improving financial metrics that support strong price growth. Let's take a look at what Crocs' (NASDAQ:CROX) recent results tell us about its potential for future gains.

What the numbers tell you
The graphs you're about to see tell Crocs' story, and we'll be grading the quality of that story in several ways.

Growth is important on both top and bottom lines, and an improving profit margin is a great sign that a company's become more efficient over time. Since profits may not always grow at a steady rate, we'll also look at how much Crocs' free cash flow has grown in comparison to its net income.

A company that generates more earnings per share over time, regardless of the number of shares outstanding, is heading in the right direction. If Crocs' share price has kept pace with its earnings growth, that's another good sign that its stock can move higher.

Is Crocs managing its resources well? A company's return on equity should be improving, and its debt to equity ratio declining, if it's to earn our approval.

By the numbers
Now, let's take a look at Crocs' key statistics: 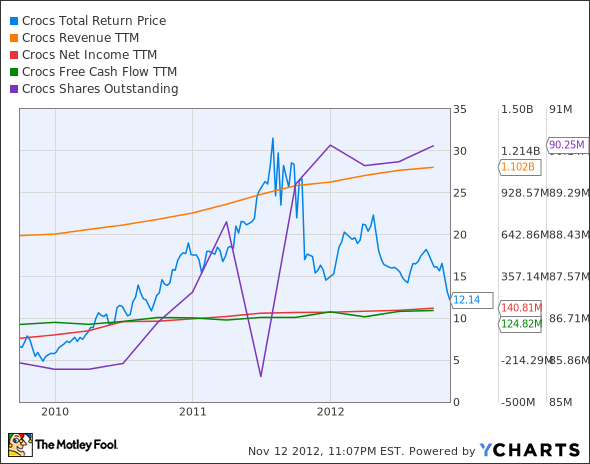 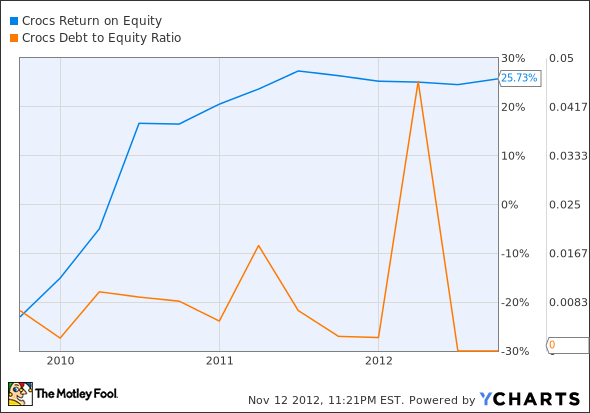 How we got here, and where we're going
Very impressive! Crocs earns a flawless seven of seven possible passing grades in our analysis. Two dividend-related grades were excluded because Crocs doesn't pay dividends, but based on its progress, it wouldn't be too surprising to see a sustainable dividend show up in the future. However, after a withering decline from last year's heights, is Crocs still worth a second look? Let's dig deeper.

Value-seeking investors may find Crocs more attractive at today's single-digit P/E. It wasn't that long ago that Crocs held a valuation more typical of high-growth stocks, with a 32 P/E at the end of 2010. The fall has been precipitous, and Crocs sports a 7.9 P/E today, which seems more suitable for a company that will barely tread water in the future, than one that's posted such impressive growth in the recent past.

That impressive growth has come in fits and starts, which can be the case for stocks built on "faddish" products. Today, Crocs contends with weak Asian demand, which could undermine its momentum. The same issue has plagued Deckers Outdoor (NYSE:DECK), which has suffered a major decline in 2012, as its Ugg boots have been pressured by rising costs and international sales declines, as well. In fact, as my fellow Fool Sean Williams notes, a number of footwear-focused companies have stumbled due to weak demand, with Wolverine World Wide (NYSE:WWW) and Nike (NYSE:NKE) also coping with tighter European purse strings. None of these companies can be rightly said to be "luxury" shoemakers, so the decline seems to be worse in the lower half of the cost scale, where Crocs has historically thrived.

Looking forward, Crocs is in a better position than either Deckers or Nike, despite soft demand, as its unique shoe material allowed it to reduce costs as a percentage of sales, while the others are having a rough time with higher input costs. That's not enough to offset a projected full-year profit decline that could easily push its P/E back to double-digit territory without any other change to the stock price.

Crocs has put together a very solid period of growth over the past few years that simply isn't reflected in its current stock trend. It appears caught in the gloomy atmosphere hitting the entire footwear industry -- even former highflier Skechers (NYSE:SKX) has lost a significant amount of its value this fall, partly in response to a consumer backlash over false promises of fitness from "toning shoes." Crocs doesn't have to worry about that, because its only promise is comfort. However, until international macroeconomic headwinds reverse, it may wind up suffering with the rest of the industry, despite a performance that should stand on its own.

Putting the pieces together
Today, Crocs has many of the qualities that make up a great stock; but no stock is truly perfect. Digging deeper can help you uncover the answers you need to make a great buy -- or to stay away from a stock that's going nowhere.