The Bank of England creates one of the more amusing charts in the economic world -- the fan chart:

The graph shows that for England, GDP growth could be anywhere between -1% to 4% in the future. Besides lacking labels, which should mark the Y-axis as GDP growth, it demonstrates the incredible haziness that we have about the future. It's like trying to look at a graph after a few too many pints. When even those who study these things for a living can't be sure on where the economy is headed, what chance do you have? Not much.

This shows the need to invest in companies that will do well no matter the future economic indicators. While not every one of your investments can fall into this category, if you're a defensive investor looking to preserve capital, a healthy proportion of your portfolio should be in companies that maintain their value whether the economy grows 4% or shrinks 1%.

Just what companies?
Look for companies that focus on returning value to shareholders. Here are four examples that all held up well during the past recession, as graphed out from the top of the market in late 2007: 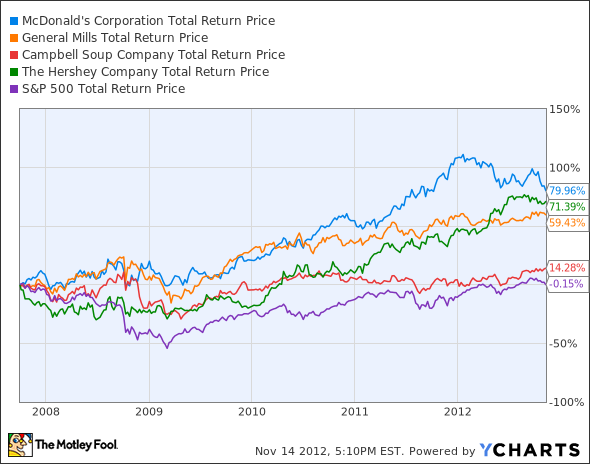 While the S&P 500 (SNPINDEX:^GSPC) fell more than 50% in 2009, and has since only recovered to those 2007 highs, McDonald's (NYSE:MCD), General Mills (NYSE:GIS), Campbell Soup (NYSE:CPB), and Hershey (NYSE:HSY) tumbled by only half that amount, and many significantly outperformed the market's recovery.

What makes these companies good for fuzzy futures? Brand value, as well as profit margins that hold up no matter the latest economic numbers: 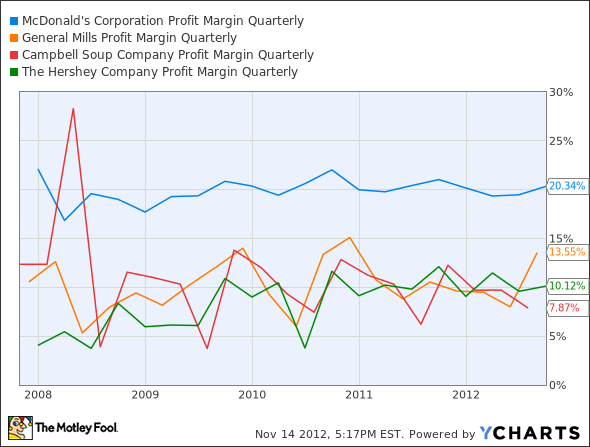 With profit margins all nearly in the double digits, the companies have some breathing room for when revenues fall.

It takes money to make money
The concept of capital preservation may sound stodgy, but it's simply making sure you keep what you've earned. Take this word problem:

A stock you own, ticker HARE, drops 50% in value and then jumps 100% in value. Another stock, ticker TORTSE, slowly gains 10% over the same period. Which performed better?

HARE only returned to its original value, while TORTSE obviously increased 10%. It can take significantly more percentage gains to recover from any percentage fall, making companies that preserve their value important for those looking to maintain portfolio value and grow it slowly. And with even our experts' inability to predict the future, such companies don't require us to make the same mistake of attempting to guess the future.

Potential futures are varied
Immediately after the election, the financial news turned its attention toward the "fiscal cliff." There are guesses on all sorts of outcomes, from no solution, to partial agreements, to full compromises. With each one of those outcomes, there are forecasts for what would happen to budgets, unemployment, and GDP. But since only one such outcome can happen, at most only one of these predictions will be true.

With little track record of predictions, many analysts are never scored for accuracy. And many end up being wrong. Take this example that Fool Morgan Housel wrote:

In the late 1990s, oil cost about $13 a barrel and a gallon of gas was less than a buck. Analysts' consensus was that it would stay that way. A 1998 Associated Press article explained that oil prices were likely to remain depressed "into the next decade, with no full recovery until after 2007." The Energy Information Agency predicted that after 2007 oil prices would trade no higher than $20 a barrel. That was on the bullish end; a 1999 New York Times article reminds us that "Oil company executives told Congress that prices would linger around $10 a barrel for the next decade." The reason for cheap oil was simple: Asia's economic crisis was "expected to help keep gasoline prices low for at least the next decade," The Kansas City Star wrote.

Whoops. Prices skyrocketed to $140 a barrel by 2008 -- 14 times the oil industry's own estimate a decade before. Much of the rise was due to heavy demand from ... Asia.

As funny as the Bank of England's fan chart is, if a fan chart was constructed from financial analysts, there would be no limit to the outcomes. It would range from an apocalypse to a utopian ideal. So protect yourself with quality companies that have strong brands, profit margins, and management that will outperform given any outcome.