IPO lockup expirations just ain't what they used to be. Back in my day, a bottle of soda cost just $0.15, we used to have to ride our horses to work through six feet of snow, and freshly public companies facing a lockup expiration were destined to tank.

Nowadays, that last bit of formerly accepted wisdom doesn't quite pan out as reliably as it used to. In August, Yelp (NYSE:YELP) shares skyrocketed by 25% the day its lockup restrictions on insiders expired. That made me feel rather silly since I figured shares would tank once early investors were permitted to flood the market.

Well, the same storyline played out today for Facebook (NASDAQ:FB), with shares jumping by as much as 11% on its own IPO lockup expiration. Is the lockup expiration sell-off a thing of the past?

Not last or least

The captain has turned off the "fasten seatbelt" sign. We're talking about a total of 804 million shares that are now permitted to roam around the cabin freely. This is by far the biggest block of shares related to the IPO that are being unshackled, so most were expecting some selling pressure. That nearly doubles the amount of shares floating around out there, which was approximately 921 million before today.

Just because insiders can sell doesn't mean they have to, and the lack of selling pressure today implies they think shares are too cheap. That's a positive side for us outsider investors who aren't privy to as much detail to Facebook's inner workings.

This lockup is the biggest but it's also not the last. There are two more lockup expirations on the horizon, so investors still have a couple of dates to circle on their Facebook event calendar. The next one is on Dec. 14 for roughly 155.9 million shares held by selling stockholders from the IPO (excluding Mark Zuckerberg). 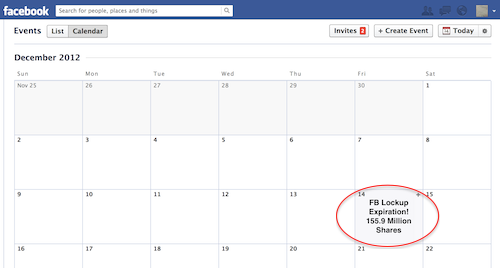 After that, another expiration is coming on May 18 on Facebook's one-year anniversary as a public company. On that day, 47.3 million shares held by Mail.ru Group Limited and DST Global Limited will be freed.

Still, with the largest block of shares having now been freed, subsequent smaller lockup expirations will have less impact.

Main squeeze
It's also quite possible that some of today's rally is driven by a short squeeze, where bears scramble to cover their short positions and add buying pressure. Short interest has been steadily rising since Facebook's high-profile fall from grace as bearish sentiment has accumulated in its six months as a public company.

Short interest ticked down in September as shares traded near lows, but then moved higher by the end of October, possibly in expectation of shares tanking following the highly publicized November lockup expiration. 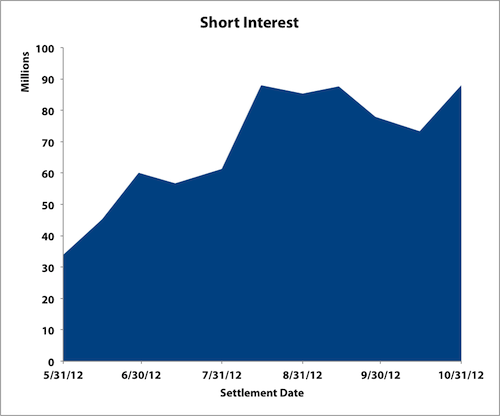 As of the Oct. 31 settlement date, there were nearly 88 million shares being held short, almost 10% of the aforementioned float. With early insiders and employees standing pat, the bulls are gathering strength as the bears run for the hills.

Bad for Zynga, good for Facebook
Incidentally, news also broke yesterday that Zynga (NASDAQ:ZNGA) was losing its CFO David Wehner to join Facebook in a senior finance position. Zynga's executive exodus continues to get worse before it gets better, with Wehner being but the latest in a long string of C-suite exits. Zynga reshuffled some other execs, with David Ko becoming COO and Barry Cottle becoming chief revenue officer.

This is meaningful for Facebook, as Zynga is the largest contributor to the social network's burgeoning payments platform. Scoring Zynga's CFO may help it gain a deeper understanding of its payments business.

They don't make 'em like they used to
The rally after today's lockup expiration is in stark contrast to how Facebook performed on a separate lockup expiration three months ago. In August, roughly 271 million shares -- almost a third of today's batch -- became eligible for sale, sending shares down by over 6%.

Turns out investors should have listened to fellow Fool Rick Munarriz, who told you to buy Facebook yesterday. Facebook continues to hold its own against heavyweight ad rival Google (NASDAQ:GOOGL), offering advertisers a social value proposition. It's even working on a search product as we speak, further ruffling Big G's feathers. Facebook also unveiled its new social job board, which has immense revenue potential and is giving the bulls even more to feast on today.

Lockup expiration sell-offs may not quite be a thing of the past, but investors can't bet on them like they used to.